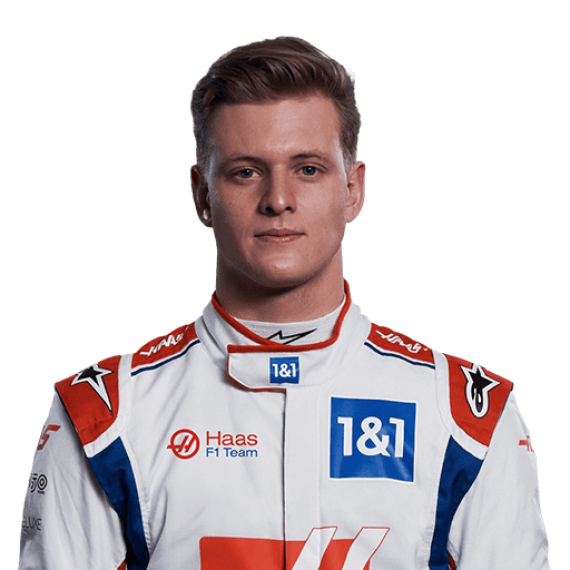 After winning the FIA Formula 2 Championship, Mick Schumacher made his Formula 1 debut with the Haas F1 Team in 2021, and will remain with the squad in 2022. With a surname synonymous with motor racing, all eyes are on the young Schumacher as he seeks to leave his own legacy.

Despite having German parents, Mick Schumacher was born and raised in Switzerland, growing up in Vufflens-le-Chateau. He is famously the son of seven-time F1 World Champion Michael Schumacher and Western Riding European Champion Corinna Schumacher

As well as this, he is the nephew of Ralf Schumacher, who himself competed in Formula 1 in the 1990s and 2000s. Schumacher is also the step-nephew of Sebastian Stahl, another German racing driver.

Schumacher was skiing with his father when Michael suffered life-threatening brain injuries on 29 December 2013. The family have chosen to keep details of Michael's condition private in the years since, though discussed the situation publicly for the first time in the 2021 Netflix documentary film, Schumacher.

Mick first spoke openly about his father in 2017, when he described Michael as his idol and inspiration.

Schumacher started his motorsport career in 2008, when he initially raced under a pseudonym to avoid attention. He chose the name Mick Betsch, using his mother's maiden name.

In 2014, Mick changed his racing name to Mick Junior, and started competing in international championships. He ended the season second in the German Junior Kart Championship, as well in the European and World Championships. Despite not using his real surname, his success was still reported in the international press.

Success in karting soon facilitated a move into single-seater cars, which began with the ADAC F4 series. He joined the series in 2015, following a 2014 test with Jenzer Motorsport. This was the first year in which he raced under the name Schumacher, and he did so for the Amersfoort Racing team.

In 2016, Schumacher remained in ADAC, but switched to Prema, a team that is widely regarded as one of the best junior setups in motorsport, with close links to the Ferrari Drive Academy to match. He would also enter the Italian F4 Championship with Prema, finishing runner-up in the standings to Marcos Siebert.

The next major series Schumacher competed in was the FIA Formula 3 European Championship, again with Prema. He finished his debut season in 12th place, with his best race result of third coming at Monza. While Schumacher was the lowest finisher of the four Prema drivers, he was still ranked as the third-best-placed rookie in the championship.

Schumacher continued with Prema for the 2018 season. As would become customary for the young driver, he started the campaign slowly, not taking his first win until the 15th round at Spa-Francorchamps. Prior to this race, he was sitting 10th in the championship standings, 67 points behind leader Dan Ticktum.

However, Schumacher would work his way to that year's F3 title after an astonishing end to the season, winning seven more races, including five in a row. He finished 57 points clear of Ticktum, with seven pole positions and four fastest laps also to his name.

Schumacher graduated to the Formula 2 Championship in 2019, driving for Prema, initially alongside Sean Gelael. He scored points in his first F2 race, getting reverse-grid pole position for the subsequent Sprint. Much of the early season would bring frustration for Schumacher, though, who suffered a spate of retirements due to collisions.

His second-highest finish that year came at the Red Bull Ring, where he picked up fourth in the Sprint Race after an impressive surge through the field. The high mark of the season for Schumacher would come in Hungary, where he converted reverse-grid pole into a first F2 race win. He ended the campaign in 12th place in the championship, considerably ahead of his experienced teammate Gelael.

Schumacher would stay on with Prema for the 2020 F2 Championship, where he was joined by the young F3 champion - and fellow Ferrari Driver Academy member - Robert Shwartzman. In the Feature Race at the season-opener in Austria, he collided with fellow championship contender Callum Ilott while battling for the race lead.

Schumacher suffered similar misfortune in the second round of the championship when his fire extinguisher went off in the cockpit, forcing him to retire. His title challenge finally got underway in earnest in Hungary, where he would seal a double podium. This was followed up by a run of five consecutive podiums, which included his second-ever Formula 2 win in the Feature Race at Monza.

Schumacher took the F2 championship lead for the very first time at Mugello, after an impressive mid-season spell. He further established control in Russia, where he won a shortened Sprint Race. Schumacher's closest rival for the championship was Ilott, setting up a showdown between the Ferrari-backed juniors.

Heading into the final round in Bahrain, held on the Sakhir venue's outer layout, Schumacher had a 14-point advantage over Ilott. Remarkably, he would endure his worst-ever qualifying performance in F2 for the Feature Race, starting well down the order in 18th position. His subsequent recovery drive was the mark of a champion.

Schumacher went on to finish sixth, passing a number of drivers in specular fashion en route to a title-defining drive. Ilott suffered from severe tyre degradation in the second half of the race, which left the Briton outside of the points, thus confirming Schumacher as the 2020 F2 Champion.

In late 2020, Schumacher was announced as a Haas driver for the 2021 F1 season. He was paired alongside Russian Nikita Mazepin, whom Schumacher previously competed against in Formula 2, as well as in karting. In addition to his F2 title, the drive came partly through Schumacher's long-standing association with Ferrari, who supply Haas with engines and other components.

His first experience of driving a Formula 1 car came with Ferrari in April of 2019, during in-season testing in Bahrain. He made his debut appearance at an F1 race weekend in 2020, driving for Haas in place of Kevin Magnussen during FP1 of the Abu Dhabi Grand Prix.

Ahead of the 2021 F1 season, which would be Schumacher's debut year in the sport, he requested to use the infamous MSC abbreviation as his own. MSC was used by his father Michael, which at the time helped to distinguish him from his brother Ralf. In previous junior racing series, Mick had raced under the abbreviated SCH.

With Haas opting not to develop their car for the 2021 season in order to focus on preparations for the sport's new regulations in 2022, Schumacher and Mazepin faced an uphill task, and frequently found themselves racing at the back of the field.

Schumacher kicked off his Formula 1 career by qualifying 19th in Bahrain, and ended the race in 16th, meaning that he had already achieved something his father did not by finishing his debut Grand Prix.

At the Monaco Grand Prix, Schumacher crashed in Free Practice 3, with the damage to his car meaning that it was unable to be repaired in time for him to take part in qualifying. However, the German did manage to pull off one of the few overtakes of the race by getting ahead of teammate Mazepin on the opening lap.

Schumacher and Mazepin hit the headlines at the next event in Azerbaijan when Mazepin appeared to make a very late high-speed move on Schumacher during the final lap of the race, causing the two to nearly collide. A furious Schumacher shouted over the radio: "Is he trying to kill us or something?"

During qualifying for the French Grand Prix, Schumacher crashed, though also reached Q2 for the first time.

The highlight of Schumacher's season came at the Hungarian Grand Prix. A chaotic opening lap resulted in several front-runners either being eliminated from the race or pushed down the order, meaning that Schumacher was able to run in the points for a time.

He enjoyed a battle with Max Verstappen at one stage, leaving many impressed by his skills. Schumacher also later selected this as his best moment of the 2021 season. Ultimately, he did not collect any points in the end, but did record a career-best finish of 12th.

At the Turkish Grand Prix, Schumacher again reached Q2, though ended up finishing the event in 19th following an opening-lap collision with Fernando Alonso, who later apologised for the incident.

There were DNFs in Mexico and Saudi Arabia, with the latter coming about as a result of Schumacher crashing, which caused the race to be red-flagged.

Neither Haas driver scored any points in 2021, but Schumacher placed 19th in the World Championship rankings ahead of Mazepin.

What can Haas and Schumacher achieve in 2022?

Schumacher will enter into his second season in Formula 1 in 2022, and will be joined by new teammate Kevin Magnussen at Haas.

Given the new regulations being introduced into the sport, there is an amount of uncertainty over how the pecking order will look in 2022. However, Steiner has also said that he believes there is a chance of Haas working their way back up to the midfield.

Schumacher, meanwhile, says he knows what is expected him of during the season ahead, and is hopeful that he and the team can continue to make progress.

As well as racing for Haas in 2022, Schumacher will take on reserve driver duties at Ferrari, a role he will share with Antonio Giovinazzi.