Hill impressed by Mick Schumacher: He's a bit of a fighter

Mick Schumacher was given the opportunity to battle with the likes of Max Verstappen and Lewis Hamilton during the chaotic Hungarian Grand Prix, and Damon Hill feels that the Haas driver showed his skill in the process. 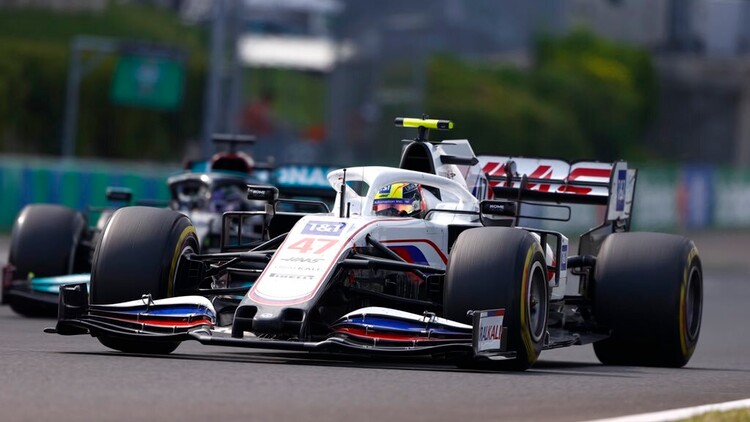 Damon Hill has been left impressed by Mick Schumacher after the Haas driver's strong performance in the Hungarian Grand Prix.

Given that the chaotic nature of the race mixed up the usual order of the field, Schumacher found himself battling with the likes of Max Verstappen and Lewis Hamilton at certain stages of the Grand Prix. The rookie driver held his own and Hill - who famously raced with Mick's father Michael Schumacher - thinks this shows a lot of promise.

"Bit of a feisty driver, is Mick," Hill told the F1 Nation podcast. "[He was] banging wheels with Max.

"Max gave him a bit of a biff coming out of Turn 3, moved over on him and he'd [Verstappen] already lost his bargeboard on the right hand side [in the first lap incident with Valtteri Bottas]. Then he kind of gave Mick a bit of a nudge going into Turn 4, but Mick [was] putting up a very strong defence.

"With George Russell, I thought his move around the outside of Mick was incredibly brave. He gave no quarter at all. He [Mick] might be in a slower car, but he's determined to fight so we'll be keen to see how he develops."

F1 journalist Tom Clarkson added: "He said it really helped his development, running with Hamilton and Verstappen and not being intimidated. He fought but not too hard. He knew when his time was up and had to let them go. [It was] really fun to watch him."

Hill believes that this performance from Schumacher highlights how strong he could potentially be in a better car in the future.

"[He] got a bit of limelight," the 1996 Formula 1 World Champion said. "It's good. They do say in acting there's no small parts, only small actors, so if you're in a team that's not at the front, it's still an opportunity.

"I think he's also showing he's a bit of a fighter as well, so it will be good to see him in a more competitive car in the future."

Schumacher has previously been linked with a move to Alfa Romeo should Kimi Raikkonen leave at the end of 2021.