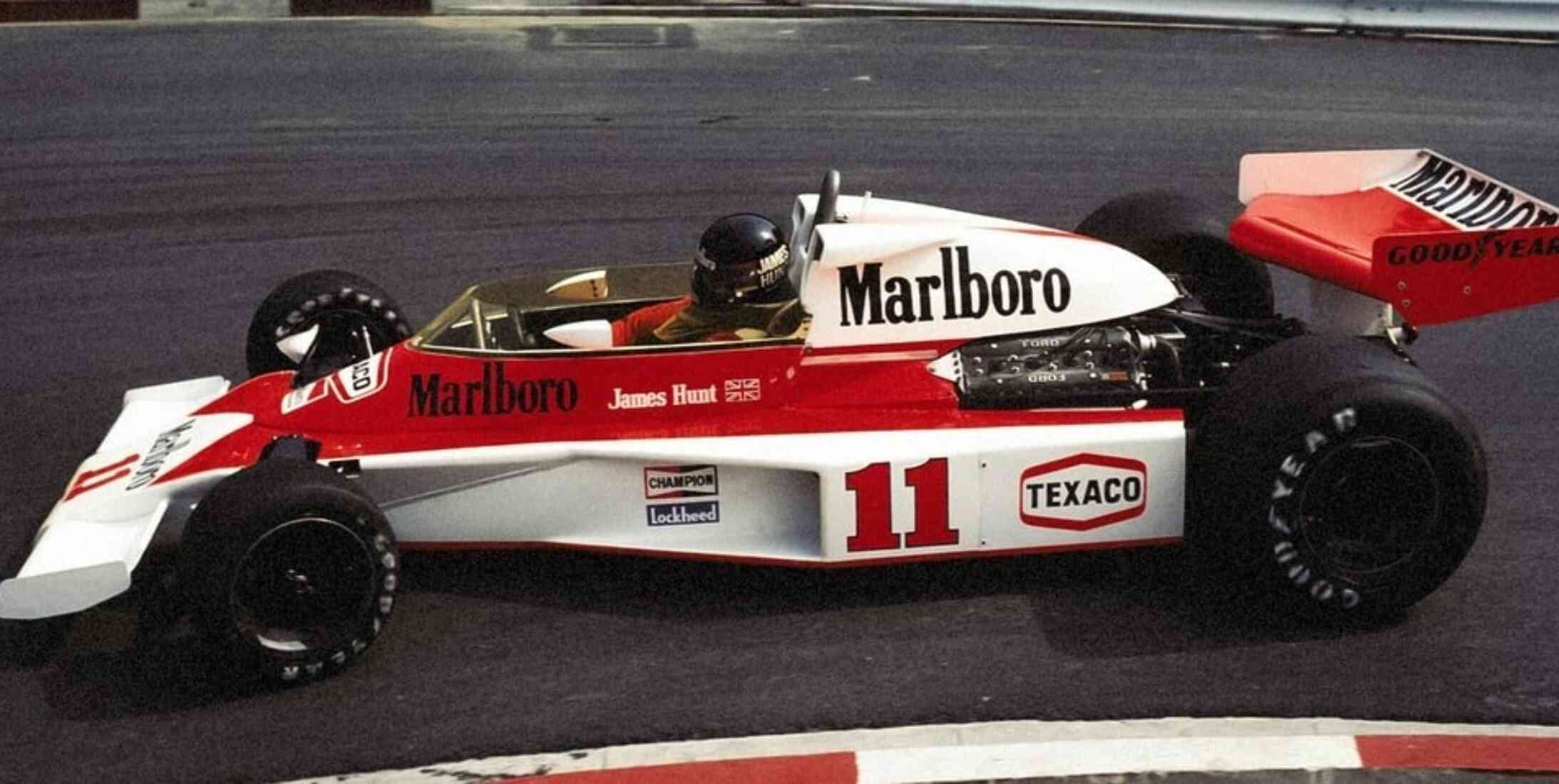 British racing driver James Hunt was one of Formula 1’s most colourful personalities. He is best known for winning the championship in 1976, his playboy lifestyle, and his rugged driving style.

Born on August 29th, 1947, James Hunt began his career in Formula Ford and was promoted to Formula 3 in 1969. Racing for the STP-March team, Hunt developed a reputation of being a fast but accident-prone driver and earned the nickname, “Hunt the Shunt.” Hunt would also lead a party-boy lifestyle and this coupled with his middling race results meant a career in F1 would have been unlikely were it not for the benevolence of Lord Hesketh.

The Period at Hesketh

The Hesketh Racing team began life competing in Formula 3 and Formula 2 before team owner Hesketh decided that he would try his hand at Formula 1. Known for spending more on champagne than fuel and for having more women around the garage than mechanics, the Hesketh team was known as something of a joke in the F1 paddock. The ridicule would stop when at the 1975 Dutch Grand Prix, Hunt would secure his and Hesketh’s first win beating Niki Lauda and Ferrari.

However, by the end of the 1975 season, Hesketh could longer no longer afford to run the team and Hunt was without a drive heading into the 1976 season. Fortunately for the Englishman, Emerson Fittipaldi decided to leave McLaren and Hunt was the only experienced driver left to take his place.

The 1976 season was one of the most dramatic in Formula 1 storied history. While Hunt’s McLaren was fast, he was able to take pole at the season-opening Brazilian Grand Prix, it was also unreliable. Hunt would take his first victory in Spain but by this point, Lauda and Ferrari were comfortably in the lead. This would all change at the season’s German Grand Prix when Lauda would suffer his infamous crash and miss the following three races, Hunt would win two of those and firmly reestablish himself in the fight for the championship. With momentum now with Hunt and McLaren, the British pairing would win the Canadian and United States Grand Prix ensuring that the title went down to the wire.

Hunt would eventually win the title in Japan when Lauda understandably decided that the conditions at the Fuji Speedway were too dangerous to continue in and retired from the race. Hunt secured third place and won the championship by a single point.

The 1976 season was so dramatic that in 2013, the movie Rush which chronicles the rivalry between Hunt and Lauda was released.

Hunt’s interest in Formula 1 began to wane after his title triumph. The Briton would add three more wins to his tally before ending his career with the Wolf Racing team midway through the 1979 season citing he did so, “for reasons of self-preservation.”

Commentator for the BBC

After his driving career ended, Hunt would join the BBC as a co-commentator for the races alongside Murray Walker. While Hunt wouldn’t take the job too seriously at first, polishing off two bottles of wine during his first broadcast, he would become a respected and opinionated color commentator over his 13-year stint. Hunt would ultimately die in his sleep from a heart attack at the age of 45 on June 15th, 1993.