Hamilton storms to victory over Verstappen in Brazil

Mercedes' Lewis Hamilton came from 10th place on the grid to win the Brazilian GP, ahead of Red Bull's Max Verstappen. 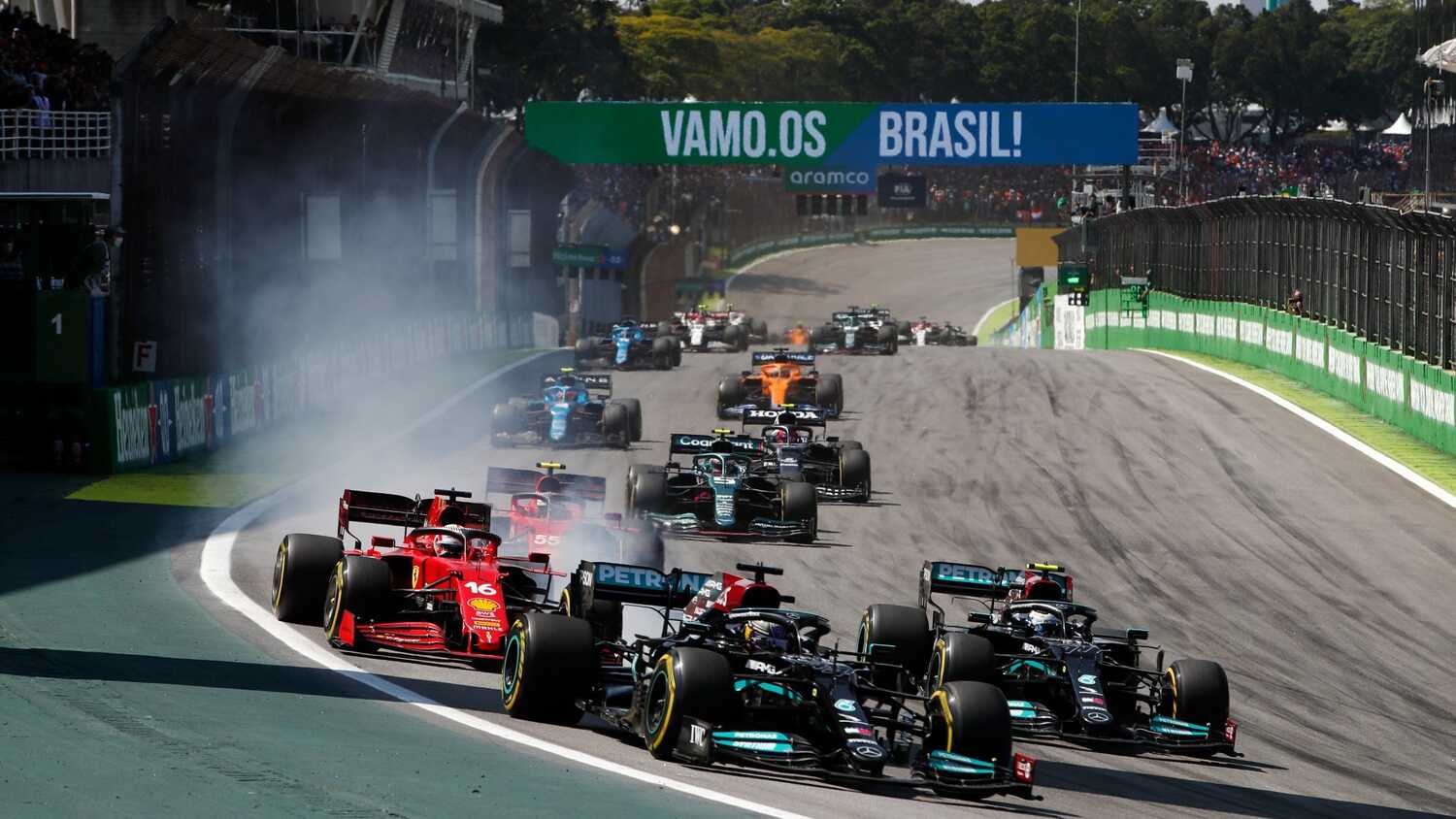 Mercedes' Lewis Hamilton has won the Brazilian Grand Prix, storming his way through to the front from 10th place on the grid to claim his 101st career victory and close up seven points on Max Verstappen in the Drivers' Championship.

The reigning World Champion gained four places on the very first lap of the race, while Red Bull had a dream start as Max Verstappen bullied his way past pole-sitter Valtteri Bottas through Turn 2, with Sergio Perez following suit to make it a 1-2 for the team.

A brief Safety Car, for debris on the circuit for a clash between AlphaTauri's Yuki Tsunoda and Aston Martin's Lance Stroll, closed up the field once again and allowed Hamilton the chance to immediately attack Perez.

Perez did his best to defend against Hamilton, but the prodigious straight-line speed of the Mercedes proved unstoppable. Hamilton got past Perez into Turn 1, with the Mexican driver fighting back to retake second place but, next time around, Hamilton was through and headed off after Verstappen.

An aggressive undercut from Mercedes closed up the gap to help Hamilton get within DRS range, but he never quite managed to attack the Dutch driver during the second stint. Verstappen pulled the trigger early on the second stops to head off the possibility of another undercut from Hamilton, but the Mercedes came alive during the final stint.

Hamilton attacked Verstappen into Turn 1 as the race entered the closing stages, with the Red Bull driver holding firm along the next straight and pushing the Mercedes wide through Turn 4. A brief look from the stewards determined that there was no further investigation needed, to Mercedes' consternation, but Hamilton regrouped and forced the same defensive move from Verstappen into Turn 1 soon afterwards.

This time around, Verstappen was powerless to fight against the Mercedes into Turn 4 and Hamilton took the lead. From there, he sprinted away to finish more than 10 seconds clear of Verstappen, with Bottas finishing in third place.

Hamilton closes up seven points on Verstappen as a result of the win, with the fastest lap point going to Perez in fourth place after a late pit-stop from Red Bull for that purpose.

Ferrari's Charles Leclerc was best of the rest in fifth place, finishing 50 seconds away from the winner and just two seconds ahead of teammate Carlos Sainz.

In a reversal of last weekend's race, Ferrari got the better of AlphaTauri as Pierre Gasly finished behind them in seventh place, with Esteban Ocon in eighth for Alpine. Ocon's teammate, Fernando Alonso, was ninth, with Lando Norris 10th for McLaren and claiming the final points place.

There were just two retirements from the race. Stroll, following his clash with Tsunoda, shed more debris and was pulled into the pits to retire, while McLaren's Daniel Ricciardo was called into the garage following a mid-race power unit issue.