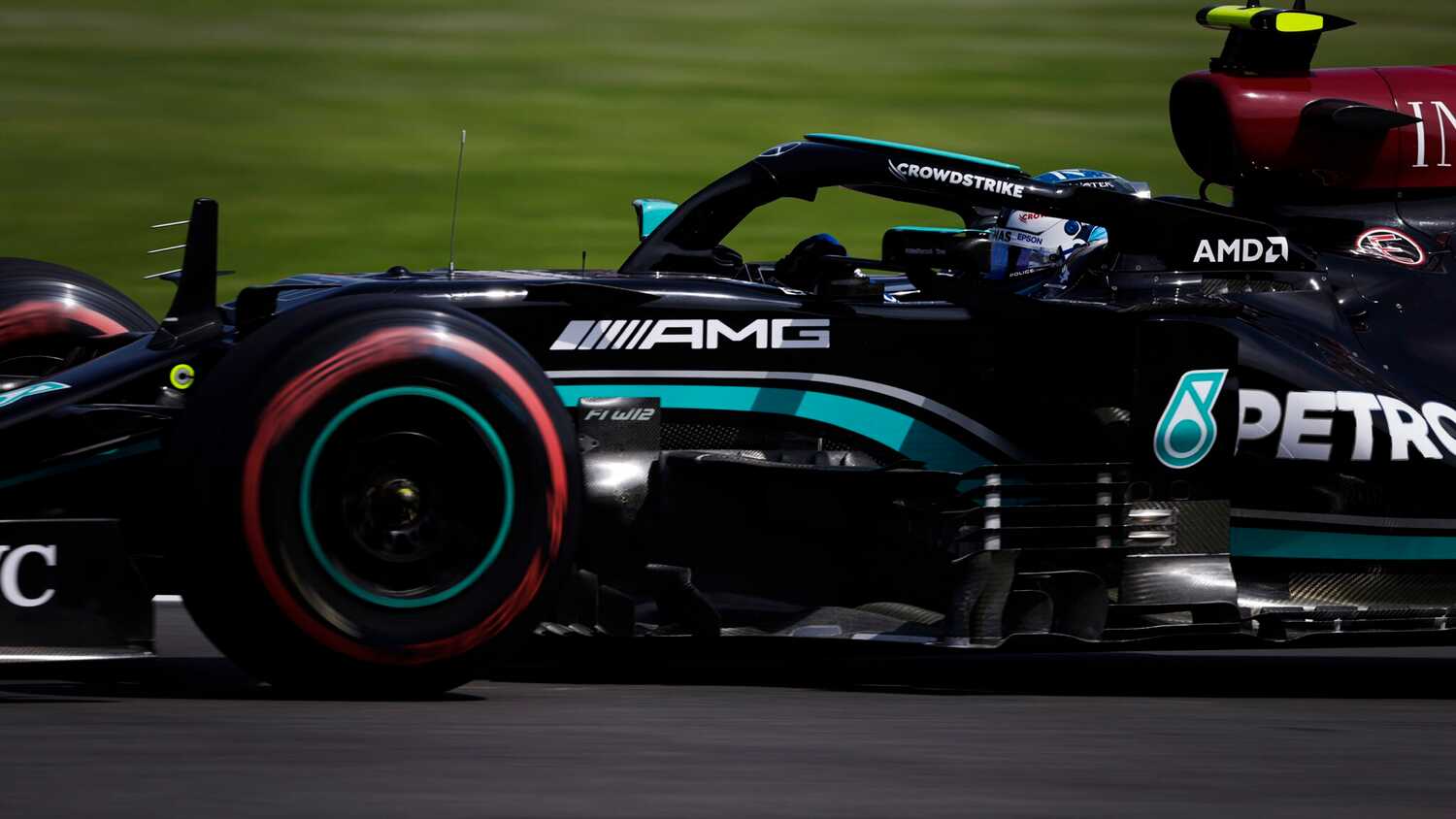 In what was a surprising turn of events, Mercedes proved untouchable in the final part of qualifying as Bottas set a 1:15.875 on his first run in Q3. This was more than a tenth quicker than what Hamilton managed, but it was Red Bull which shocked as they fell short in the crunch part of qualifying.

Having looked the favourites throughout the weekend, Verstappen was left scratching his head after falling 0.350s shy of Bottas' time.

A reasonably scruffy first flying lap put him on the back foot, while his second run was ruined when AlphaTauri's Yuki Tsunoda went off through the esses on the final runs. This distracted Sergio Perez, with the two cars being off the track and also hampering Verstappen as he arrived at the scene.

Perez was left in fourth, with neither Red Bull improving on their second runs as a result of the incident.

Carlos Sainz finished sixth for Ferrari, having survived a scare in the first part of qualifying when he appeared to suffer a power unit issue leaving the pits. He managed to get the car fired back up to full power, going on to make it into Q3.

McLaren's Daniel Ricciardo was seventh, ahead of Ferrari's Charles Leclerc, and Tsunoda in ninth. The Japanese rookie was the only driver to use the Soft tyres to get through to the final part of qualifying, but will drop to the back of the grid after an engine change.

Rounding out the top 10 was McLaren's Lando Norris, although he will also start from the back as a result of an engine change grid penalty.

Hamilton set the pace in the second part of qualifying, posting a 1:16.483 on the Medium tyre compound. With the drivers thinking about the first stint of the Grand Prix, the majority chose the yellow-marked Mediums for the Q2 session, and it was the Mercedes driver who appeared to enjoy the harder compound most.

Verstappen had set the pace with a 1:16.483, but Hamilton set a time right at the end of the session to pip his title rival by just 0.009 seconds as Verstappen took the opportunity to try a lap on the Soft compound.

Tsunoda finished in third, setting his best time on the Soft tyre. He was quarter of a second away from Hamilton's effort.

The rest of the top 10 set their best times on the Medium compound, meaning they will start the race on this compound.

Aston Martin's Sebastian Vettel was knocked out in 11th, meaning he is the leading driver with free tyre choice for the start of Sunday's Grand Prix. Alfa Romeo's Kimi Raikkonen was 12th, with Williams' George Russell in 13th, though the Briton will take a gearbox change penalty.

Antonio Giovinazzi was 14th in the other Alfa Romeo, failing to improve in the closing minutes of the session as he slid off the track at high speed entering the stadium section. He struck the barrier exactly side-on, and was able to extricate his car and get back to the pits without any obvious damage.

Alpine's Esteban Ocon was 15th, underlining the team's lack of pace this weekend, with Fernando Alonso knocked out in Q1. Ocon will also take an engine change penalty.

Bottas topped the times in Q1, setting a time just two-hundredths quicker than Leclerc, with Verstappen in third place.

Verstappen had been on top for most of the session, but was overcome by the top two in the closing minutes as the track evolved to start yielding the fastest times of the weekend at that point.

The first part of qualifying was marred by an early crash, as Aston Martin's Lance Stroll lost control of his car going through Turn 17. Ramping up for a flying lap, Stroll ran a little bit wide and got onto the dust off the racing line. The rear came around on him as he put the power down and tried to push through it, and he was a passenger as he went off backwards into the barriers.

The resulting barrier damage resulted in a lengthy delay of almost half an hour before the session resumed.

Alonso was a shock elimination from Q1 as the Spaniard could only manage 16th place, 1.7 seconds away from the pace set by Bottas.

Williams' Nicholas Latifi was 17th, ahead of the Haas duo of Mick Schumacher and Nikita Mazepin.

Stroll was 20th and last, having failed to set a representative time as a result of his crash. He is the final driver to take an engine penalty.