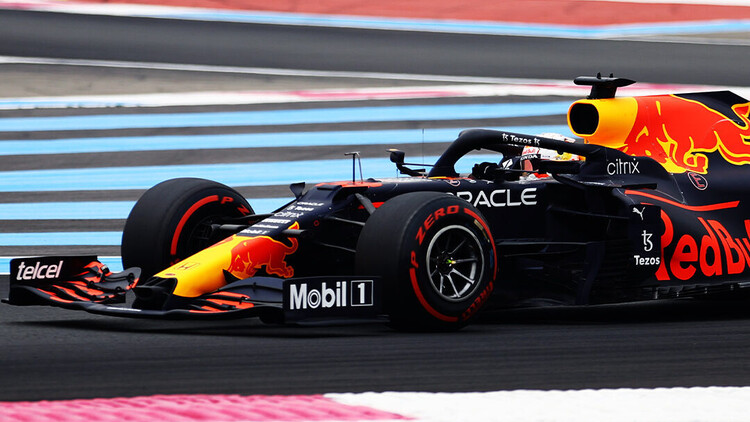 Red Bull's Max Verstappen continued his strong form at the French GP, taking pole position ahead of Mercedes' Lewis Hamilton with an impressive showing on Saturday.

The Dutchman registered a 1:29.990 to take top spot, with the Briton's time 0.386 slower than his rival. It looks poised to be a real battle between Red Bull and Mercedes on Sunday, with Valtteri Bottas and Sergio Perez starting third and fourth respectively.

As for the rest of the grid, Carlos Sainz will start fifth after a strong showing in his Ferrari around the Circuit Paul Ricard. He will be joined by AlphaTauri's Pierre Gasly on the third row, with the Frenchman finishing just 0.028s behind the Spaniard.

Charles Leclerc starts seventh, just the second time this season he's been beaten by Sainz in qualifying this season, with Lando Norris eighth ahead of Fernando Alonso and Daniel Ricciardo.

The qualifying session to determine the 10 drivers that make it into Q3 saw Bottas register the fastest time in the closing stages with a 1:30.735 ahead of teammate Hamilton, Perez, Hamilton and Sainz.

Norris had his first lap time deleted, forcing the McLaren driver to add some mileage to his mediums. However in the end the Briton finished with the seventh fastest time to make it through to Q3.

Esteban Ocon was the first driver knocked out, managing the 11th fastest time at his home race - just over two tenths slower than Daniel Ricciardo. While it was a surprise to see him out given Alpine's pace, the Frenchman will have free tyre choice on Sunday. Sebastian Vettel joined him in 12th, with the German unable to put it together in his Aston Martin.

Antonio Giovinazzi and George Russell were the other drivers eliminated, along with Mick Schumacher. The German didn't take part in the session after his late crash at the end of Q1.

The session was stopped after just a few minutes as Yuki Tsunoda took too much curb at Turn 2 and lost the rear of his AlphaTauri as a result. The Japanese driver slid into the barriers, bringing out the red flags and ending his session in disappointing fashion.

As for the action at the front, Verstappen set the pace on soft Pirelli tyres with a 1:31.001, with Hamilton finishing just 0.236s behind him, followed by Perez and Bottas.

Although he technically made Q2, Schumacher didn't take part in the session after crashing into the barriers at Turn 6 with 22 seconds remaining. It proved disastrous for Lance Stroll, who saw his first lap time deleted due to track limits. The late accident meant that Canadian was unable to record a lap time, and as a result finished 19th ahead of Tsunoda.

The other drivers dumped out of Q1 were Nicholas Latifi, Kimi Raikkonen and Nikita Mazepin.