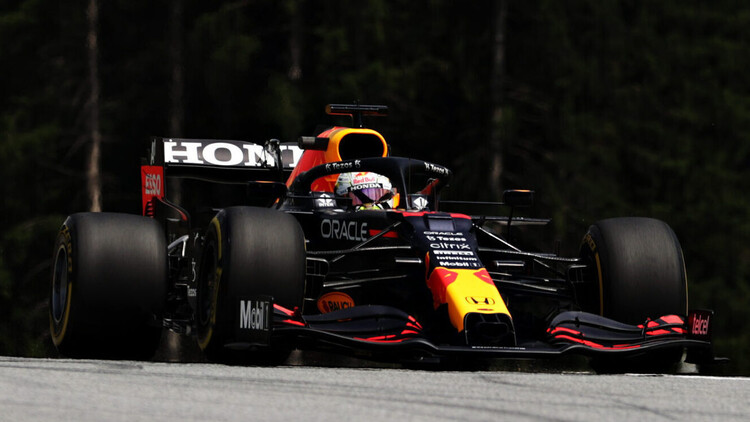 Max Verstappen has kept up his recent momentum as the Red Bull driver finished as fastest man in first practice at the Red Bull Ring.

Despite the threat of rain ahead of the session, the drivers were able to enjoy a warm and muggy hour of morning practice with a track temperature of almost 50 degrees celsius. However, the threat of rain did mean a pretty packed morning with run plans somewhat condensed by the teams to ensure they got the data they wanted.

The majority of early running took place on the soft tyre compound, with Mercedes' Lewis Hamilton and Valtteri Bottas both having their moments at the top of the times.

But, just after the mid point of the session, Verstappen put in a 1:05.910 on a fresh set of softs. The Dutch driver was the only one able to break into the 1:05s. finishing a quarter of a second clear of anyone else, with Verstappen switching to the mediums for the last fifteen minutes.

Highlighting the strength of Honda on the power-hungry Austrian circuit, AlphaTauri's Pierre Gasly finished in second place. The French driver was 0.256 slower than Verstappen, but almost two tenths clear of Hamilton in third place.

Bottas finished in fourth, half a tenth slower than Hamilton, with AlphaTauri's Yuki Tsunoda finishing in fifth to consolidate the Red Bull junior team's strong start.

Alpine's Fernando Alonso finished in sixth, despite having several fast laps deleted for exceeding track limits at Turn 10, while teammate Esteban Ocon was seventh. The pair were split by just 0.032 seconds.

Ferrari's Carlos Sainz finished in 11th, with the Spaniard having a dramatic session as he encountered a minor brake issue on his first outlap, as well as spinning off at Turn 1 early on as he lost the rear of the SF21 on the kerb.

McLaren's Daniel Ricciardo finished in 12th, with Red Bull's Sergio Perez finished 13th. The Mexican driver had a strong start to the session but fell away as he spun at Turn 4 halfway through. He didn't hit anything, but swapped focus to longer runs after returning to the pits.

Sebastian Vettel was 14th for Aston Martin, with Williams' George Russell in 15th.

Alfa Romeo's Robert Kubica was 19th, as the Polish driver took over the C41 from Kimi Raikkonen for the opening session. Despite an early spin, Kubica finished ahead of Haas' Nikita Mazepin who finished in 20th and 2.1 seconds away from the front.