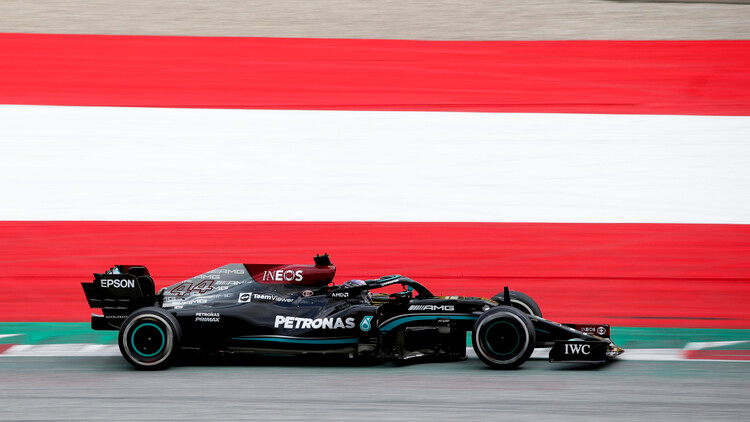 Mercedes have thrown down the gauntlet to Red Bull Racing, after going faster in final practice ahead of qualifying at the Red Bull Ring.

Hamilton set a 1:04.369 on his final qualifying simulation run on the soft tyre with 15 minutes remaining in the session, improving from a 1:05.3 on his first run.

Red Bull's Max Verstappen finished in second place, two tenths away from what Hamilton managed, with the Dutch driver leaving his final qualifying simulation until the final minutes of the session. As a result, he encountered some traffic in the first sector of his flying lap which may have compromised his ultimate time.

The championship leader backed off to recharge and try again on his now past their best soft tyres, and went 0.003 faster on his final run but had that time deleted for exceeding track limits at the final corner.

Mercedes teammate Valtteri Bottas finished in third place, 0.463 slower than what Hamilton managed, also setting his time on the soft tyre on his final qualifying simulation. The Finn goes into qualifying with a three place grid penalty looming over his head as a result of his pit lane spin during Friday practice.

Red Bull's Sergio Perez finished in fourth place, 0.657 away from Hamilton and 0.4 away from what Verstappen managed.

The AlphaTauri drivers finished in fifth and sixth place with Yuki Tsunoda and Pierre Gasly respectively, with both finishing within a second of the pacesetter Hamilton. Gasly spent the early part of the session re-acclimatising to the track after missing FP2 due to an MGU-K issue that has required a new one to be fitted by Honda.

The Aston Martin drivers rounded out the top ten, with Lance Stroll ahead of Sebastian Vettel in ninth and tenth place respectively.

While there were no particular surprises in the lower half of the grid, one team that appeared to struggle was McLaren. Daniel Ricciardo could only manage 17th place, finishing behind the Haas of Mick Schumacher and some 1.7 seconds away from the front.

Lando Norris couldn't manage any more, and was a further half a second back. Having earned a podium at the same venue in 2020, the British driver was only quicker than Haas' Nikita Mazepin, with the Russian driver having a spin midway through the session as he lost the rear exiting Turn 1.

Qualifying gets underway at the Red Bull Ring at 2pm local time.