Mercedes strike back in second practice as Bottas sets the pace

Valtteri Bottas was the pace-setter in second practice at the Losail International Circuit, as Mercedes responded to Red Bull's early speed. 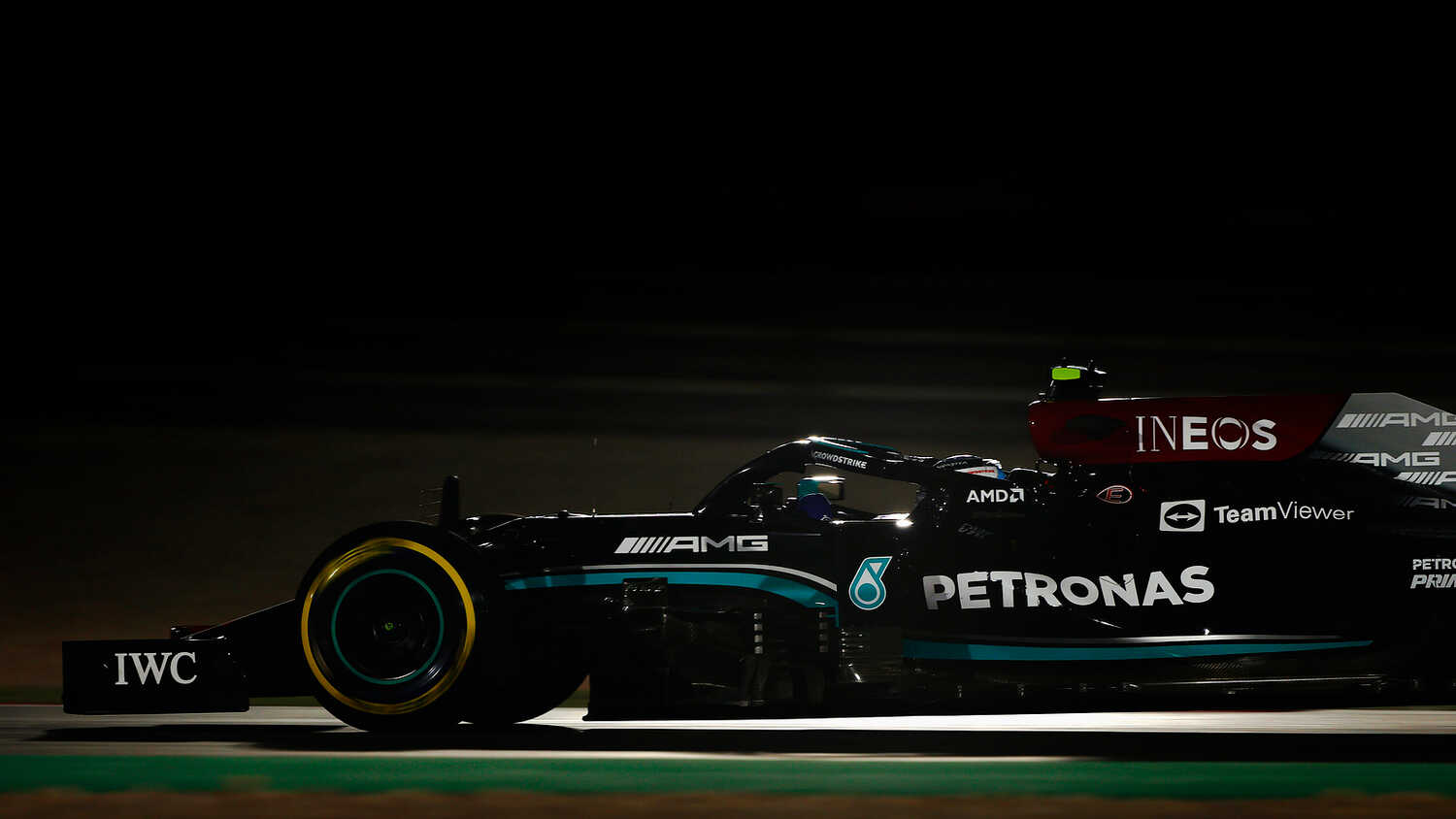 Valtteri Bottas has topped the times in second practice at the Losail International Circuit, with Mercedes striking back after Red Bull's Max Verstappen led the opening session on Friday.

With the second session taking place at dusk, as nightfall enveloped the circuit, the conditions were far more representative of what the drivers will race in on Sunday evening.

Bottas clocked a 1:23.154 on the Soft compound tyre as the drivers started on their qualifying simulations runs, with the Finn's time deleted for exceeding track limits after the FIA outlined even stricter track limits for the remainder of the weekend.

Having returned to the pits for another set of fresh Softs, Bottas managed to replicate his speed at the second time of asking as he posted a 1:23.148 - this time managing to stay within the track limits, before he swapped his focus to race simulations.

AlphaTauri's Pierre Gasly finished a close second on the Soft tyre, two-tenths away from what Bottas managed, underlining the pace that the Italian team appear to have this weekend after a strong first practice session.

Championship leader and early pace-setter Verstappen wound up in third place, putting in two flying laps on the same set of Soft tyres. On the first lap, he finished three-tenths away from what Bottas had managed. Having done another lap to recharge his ERS, he put in a second flyer, but this time was almost identical to the first - most of the loss being through the first sector.

Intriguingly, Verstappen appeared to suffer a similar rear wing issue to what was seen in Brazil, as his upper wing blade flapped around. This meant that the Red Bull mechanics had to do some work on his car to fix the problem, with the same issue also hitting Sergio Perez's car.

Mercedes' Lewis Hamilton finished the session in fourth place, 0.072s down on what Verstappen managed on the Soft tyre. Compared to the travails he had during the first session, Hamilton's FP2 was particularly quiet as he concentrated mainly on his race pace runs.

McLaren's Lando Norris finished in fifth place, recovering from the technical issue that hampered his running in first practice.

Aston Martin's Lance Stroll, having had his first practice curtailed by a brake-by-wire issue on his car, also recovered strongly in the darkness to finish in sixth and half a second away from the front.

AlphaTauri's Yuki Tsunoda, who set the early pace in the session on the Medium tyre, continued to show strongly as he finished the day in eighth, followed by the other Aston Martin of Sebastian Vettel. While it was a more straightforward session for Vettel, after technical issues distracted his progress in first practice, the four-time World Champion had to contend with having two flying laps ruined by encountering a dawdling Hamilton, and Perez.

Ferrari's Carlos Sainz rounded out the top 10 positions, which were covered by less than a second.

Elsewhere, Nikita Mazepin wasn't able to take part in the session. Haas confirmed that the Russian needed a full chassis change, ruling him out of the action. He had picked up chassis damage during the first practice session, necessitating the change.

Ferrari's Charles Leclerc, who finished in 13th, also incurred the wrath of the stewards as he picked up a fine for speeding in the pit lane.