Verstappen fends off late Hamilton charge to win US GP

Max Verstappen has won the United States Grand Prix ahead of Lewis Hamilton, with the Red Bull driver keeping his championship rival at bay in the closing stages. 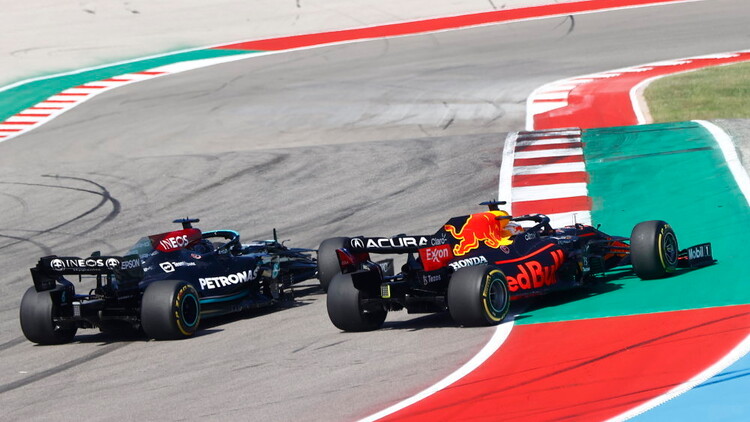 Red Bull's Max Verstappen has won the United States Grand Prix, converting his pole position into victory and thus extending his lead in the World Championship.

Lewis Hamilton, who started second, got the better of Verstappen heading into Turn 1, only for the Red Bull driver to retake the lead thanks to a well-timed undercut during the first round of pit-stops.

Although Hamilton battled back on fresher tyres in the closing stages, it was to no avail, with Verstappen claiming his eighth win of the season.

The two championship rivals wasted no time in getting the action underway. Both got off the line well, and although Verstappen tried to squeeze Hamilton into Turn 1, it didn't work out. The Mercedes driver found a way through down the inside, pushing Verstappen into the run-off area.

As a result, the Dutchman dropped all the way down to third, however Perez ceded his position to his teammate immediately. Behind them, Ferrari and McLaren got into an early tussle as well, with Lando Norris battling it out with Carlos Sainz. In the end, it was Ricciardo who benefited from the scrap, as he found his way past the Ferrari to take fifth.

Further back, Nicholas Latifi and Lance Stroll collided – with the Aston Martin driver in turn blocking his fellow Canadian, while Esteban Ocon was forced to pit on Lap 4 following contact with an Alfa Romeo.

Drivers settled into their positions from there, with Hamilton stating over the radio that Verstappen had the quicker car. Although the Red Bull man remained within DRS range, he was unable to challenge his Mercedes rival for the lead.

Things changed on Lap 11. With Verstappen complaining that his tyres were overheating, Red Bull called him in early in an attempt to undercut Hamilton, and the move paid off as he took the lead when Hamilton pitted for new tyres on Lap 14.

With a six-second lead in hand, Verstappen settled in as race leader while Pierre Gasly, who had some engine concerns in the minutes leading up to the start, became the first retirement of the race on Lap 15. A rear-suspension issue was to blame, though the Frenchman was able to bring his AlphaTauri car back into the pits. He would be joined by Ocon and Fernando Alonso later in the race.

Hamilton began to eat into Verstappen's advantage, the Mercedes driver continuing his charge after a very brief Virtual Safety Car period for debris on Lap 28. Thus, in an effort to cover against the undercut, Red Bull pitted Verstappen for new tyres on Lap 30.

Mercedes kept Hamilton out on track, with their sights set on having the advantage in the closing stages of the race, while Valtteri Bottas pitted in an attempt to make something happen strategically. It wasn't meant to be for the Finn, however, as he finished the race down in P6.

Hamilton finally pitted on Lap 38 for a new set of Hards, with Mercedes getting him out in just 2.4s, but 8.5s back on Verstappen.

That advantage quickly disappeared, with Verstappen slowed down by traffic, and Hamilton decidedly quicker on his fresher tyres. Despite Hamilton's best efforts, Verstappen crossed the line first to take victory by less than two seconds, while Perez finished a distant third.

Behind the top three, Leclerc brought his Ferrari home in fourth spot after being locked into the position for much of the race, ahead of Ricciardo, Bottas, Sainz and Norris.