The Mercedes driver won his 100th Formula 1 race in a chaotic Russian Grand Prix as Lando Norris just missed out on his maiden win due to late rain. 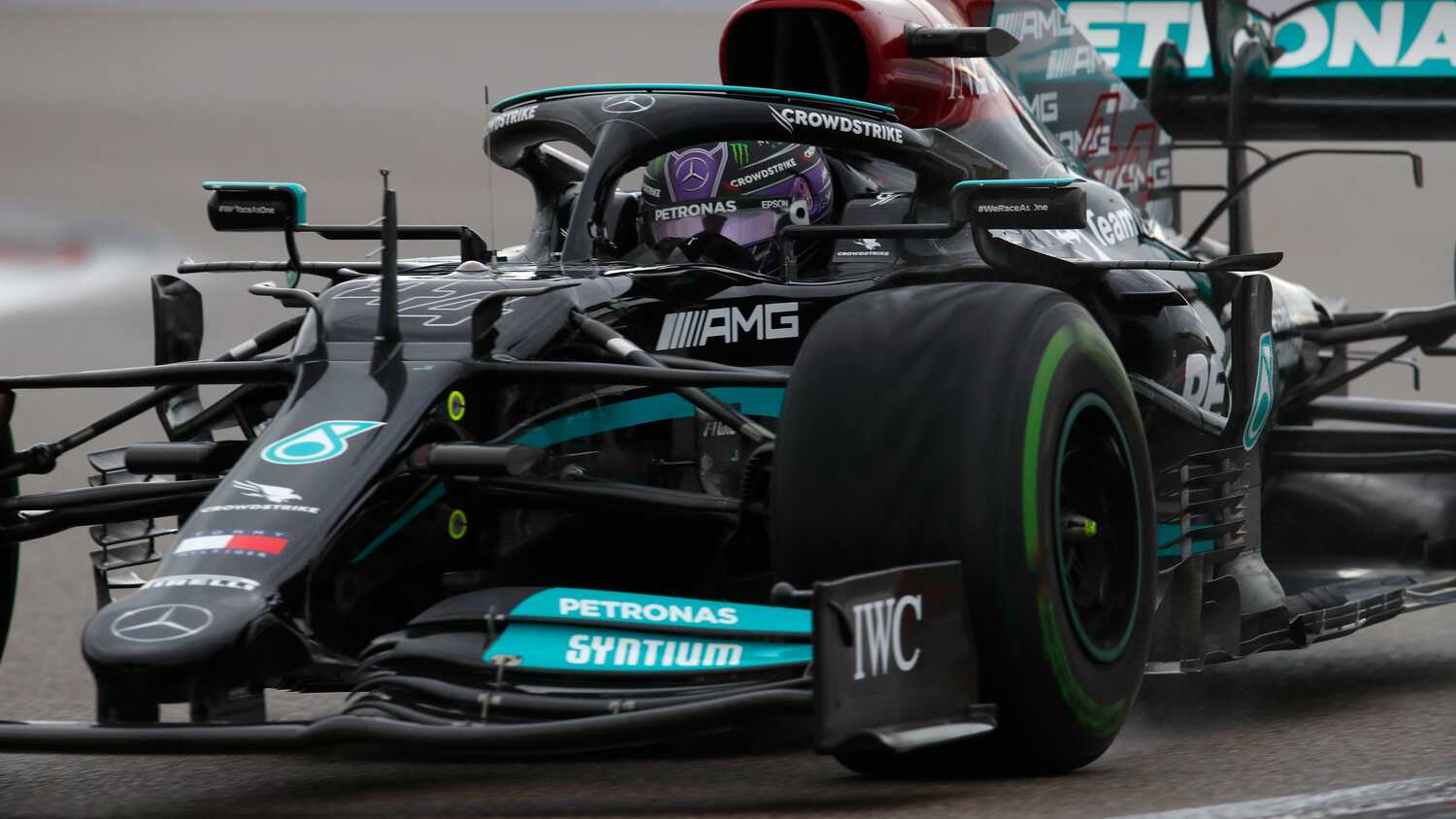 Lewis Hamilton won a thrilling Russian Grand Prix to claim his 100th Formula 1 victory, as rain caused mayhem in Sochi during the closing stages of the race.

Lando Norris won on course to win his maiden Grand Prix but his decision to not change to the Intermediate tyres at the right time, arguably cost him victory.

Norris initially lost the lead to Carlos Sainz at Turn 2 on the opening lap but regained first place on Lap 12 as the Ferrari driver's tyres wore out.

As Norris pulled out a 10-second lead, Hamilton was stuck behind the other McLaren of Daniel Ricciardo. When Ricciardo pitted, Hamilton had clean air and began to make inroads on Norris before he made his pit-stop.

Hamilton emerged in traffic but he quickly made his way through to begin his pursuit of Norris.

Despite setting consecutive fastest laps to close the gap, once Hamilton got within two seconds of Norris, the McLaren driver managed the gap until rain began to fall with five laps to go.

Hamilton pitted to move onto the Intermediate tyres as the rain fell heavily, whilst Norris was limping around on dry tyres on an increasingly wet track.

Norris eventually managed to get back to the pit lane after a very slow lap and finished down in seventh place.

Max Verstappen benefitted from the rain by pitting at the optimal time for the Intermediate tyre to jump multiple drivers and claim second place.

Verstappen had made an early charge in the race but struggled on the Medium tyre compound. The wet weather then played into Verstappen's hands, although Hamilton's win means the Dutchman now trails the Mercedes driver by two points in the standings.

Sainz ended up third, holding off Ricciardo for the majority of the race and when the rain came down.

Valtteri Bottas was having a difficult race, spending the majority of the afternoon down the order. But, similarly to Verstappen, he pitted at the right time for the Intermediate tyres to finish in fifth.

Fernando Alonso left it late to change onto the Intermediate compound, but was still able to get ahead of Norris. Kimi Raikkonen scored his best result of the year to finish in eighth for Alfa Romeo.

Sergio Perez was another big loser in the final five laps as he was running in third when the rain hit. A poorly timed pit-stop and a lack of pace in the transition from dry tyres to Intermediates pushed Perez down the order in ninth.

George Russell was running strongly and emerged from the chaos in 10th, ahead of Aston Martin's Lance Stroll and Sebastian Vettel, who collided in the final part of the race.

Charles Leclerc was having a strong race until he had a slow tyre change during his first pit-stop. He then failed to take advantage of the conditions and finished in 15th.

Nicholas Latifi retired in the pit lane when the rain arrived and Mick Schumacher failed to reach the chequered flag due to a hydraulic failure.