Mercedes' Valtteri Bottas has completed a day at the top in Russia, leading teammate Lewis Hamilton in second practice in Sochi. It was a subdued session for Red Bull's Max Verstappen, while the hour was also disrupted by a red flag. 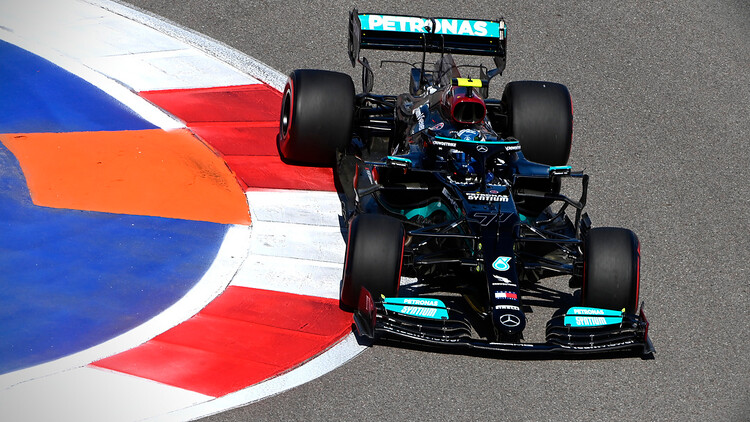 Mercedes have completed a Friday whitewash in Russia, with Valtteri Bottas leading Lewis Hamilton in second practice at the Sochi Autodrom.

Having set the pace in the morning session, Bottas followed up again with a time of 1:33.593 on the Soft tyre to beat Hamilton by just 0.044 seconds.

The session could yet end up serving as the qualifying classification for the Grand Prix on Sunday, given that Saturday's weather forecast is for heavy rain. This meant that the session had some added impetus for the drivers, with Bottas winning the battle for what could end up being pole position.

AlphaTauri's Pierre Gasly finished in third place, a quarter of a second behind the leading Mercedes, but brought out the yellow flags right at the end of the session as he damaged his front wing over the kerbs exiting Turn 2, with the debris ending up on the circuit. He finished ahead of McLaren's Lando Norris, with the British driver half a second off the pace.

Alpine's Esteban Ocon was fifth, with Red Bull's Max Verstappen down in sixth place. It was confirmed early in FP2 that the Dutch driver will start the Grand Prix from the very back of the grid, as his car has been fitted out with a new power unit for the weekend. It was a subdued session for Verstappen, finishing a second off the pace in his RB16B, as he complained about a lack of straight-line speed.

Ferrari's Carlos Sainz finished in seventh place, with Alpine's Fernando Alonso in eighth ahead of Aston Martin's Sebastian Vettel. The German driver continued his strong start to the weekend by placing in the top 10 once again, although did have an awkward moment with a mistake at Turn 7 late in the session that saw him having to use the escape area.

Rounding out the top 10 was Ferrari's Charles Leclerc. Like Verstappen, he's taken on a new power unit and is facing a back of the grid start for Sunday's race.

The session had to be red-flagged at the 40-minute mark, due to Alfa Romeo's Antonio Giovinazzi crashing at Turn 9. The Italian driver ran wide over the kerbing and lost the rear under load through the left-hander. Spinning around, the rear of the Alfa smashed into the barriers.

While Giovinazzi managed to get out of the wall and drive away, the extent of the damage meant that debris started falling off the rear of the car and he was told by his engineer to pull over and stop. This he did, while Race Control took the decision to red flag the session as the car was recovered and the barrier damage evaluated.

The session resumed with just over 10 minutes remaining, but there were no particular changes in the closing minutes of the session as Bottas held onto top spot at the chequered flag.

All focus now switches to Saturday, where disruption to the schedule is expected due to the weather forecast of heavy rain.