Verstappen leads the way ahead of Ferrari in first practice

Red Bull's Max Verstappen has set the pace in the opening practice session in Austria, coming home ahead of Ferrari's Charles Leclerc and Carlos Sainz. 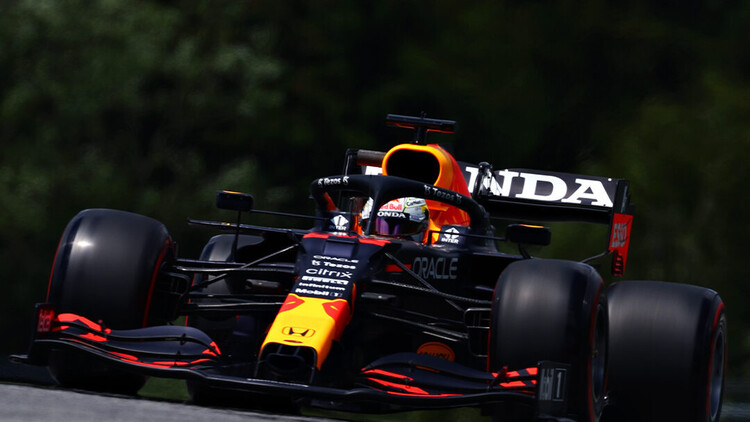 Max Verstappen has picked up where he left off last weekend by topping the time in first practice at the Red Bull Ring.

The Dutch driver set a 1:05.143 on the soft compound midway through the session, with the practice hour taking place under a grey and cloudy sky. Despite the threats of rain, the session stayed dry and warm with track temperature in the low 30s celsius.

All the drivers were given two sets of the new Pirelli tyre compounds for testing, with most choosing to use these compounds early on in the session.

Verstappen quickly jumped to the top of the times on the test compound, ahead of AlphaTauri's Pierre Gasly, while Mercedes propped up the very bottom of the times as they ran through a steady test programme.

With the times starting to tumble in the second half of the session, AlphaTauri's Yuki Tsunoda briefly topped the times before Verstappen set the time that would go unbeaten until the end of the session. With Pirelli bringing along the three softest compounds of their range, Verstappen's time was set on the soft.

Ferrari's Charles Leclerc popped into second place, also on the soft tyre, setting a time 0.266 slower than Verstappen's, before swapping to the test compound late in the session.

Carlos Sainz, in the other Ferrari, finished in third place, a further 0.022 behind Leclerc.

Mercedes' Valtteri Bottas finished in fourth place, with the W12 sporting flow-viz paint on the floor and rear diffuser for a portion of the practice session as the team attempt to find more pace from their car.

AlphaTauri's Yuki Tsunoda finished in fifth place, 0.331 behind the pace set by Verstappen. The Japanese driver went off during the session, running off into the gravel at Turn 4 but was able to gather it up and resume the track without damage.

Alfa Romeo's Kimi Raikkonen finished in sixth place, 0.443 away from the front, and a tenth clear of Mercedes' Lewis Hamilton. The reigning Champion had several laptimes deleted during the session due to exceeding track limits at Turns 9 and 10, and could be heard on the radio complaining about his rear tyres during the session.

Alpine's Esteban Ocon was 11th, ahead of McLaren's Daniel Ricciardo.

Aston Martin's Lance Stroll finished in 13th place, despite the Canadian bringing out the yellow flags twice during the session. Going across the grass at Turn 6 with twenty minutes gone, Stroll then spun off again at the final corner ten minutes later. He avoided damage on both occasions.

Taking part in an F1 weekend for the first time, Guanyu Zhou fared well as he stepped into Fernando Alonso's A521 for the first practice session. The first Chinese driver to drive in a session since 2013, Zhou finished 1.271 seconds away from the front and 0.4 behind Ocon in 14th place.

Aston Martin's Sebastian Vettel finished in 15th, ahead of Alfa Romeo's Callum Ilott. The British driver stepped into Antonio Giovinazzi's car for the session, and finished with a best time of 1:06.564 and 1.421 away from the front.

Haas' Mick Schumacher was 17th, ahead of the Williams pair of Roy Nissany and Nicholas Latifi as George Russell handed over his car to Nissany for another practice session.

Haas' Nikita Mazepin rounded out the field, having earned the ire of Raikkonen at Turn 9 early in the session, as well as having a close call with Hamilton at Turn 3.