How Red Bull stole victory away from Mercedes in France 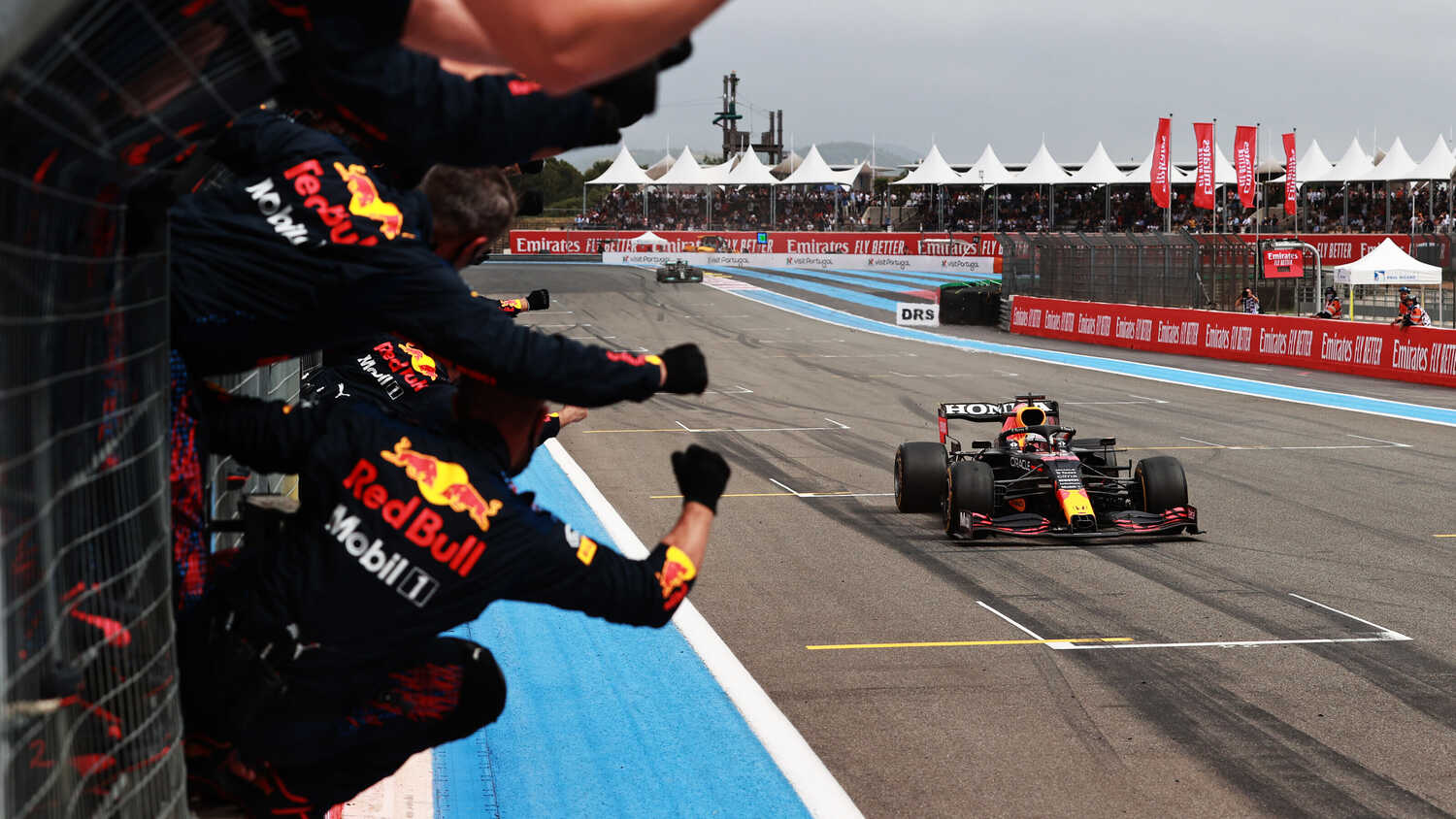 "Payback," is what Red Bull team boss Christian Horner called it, after Max Verstappen climbed from fourth place to take the lead of the French Grand Prix with a lap and a half to go. Payback for the frustration of Barcelona, where Mercedes were able to throw aggression and speed at Red Bull and hunt Verstappen down. Payback for the embarrassment of having been caught out on the strategy.

All the signs going into the French Grand Prix were that the race would be a traditional one-stop and, with both Red Bulls and both Mercedes starting on the same tyre compound, it didn't appear an alternate strategy was all that viable and that it would be a brave, brave call to try anything unusual given the pit lane loss was over twenty seconds.

Not a good start

In the early stages of the race, it looked as though Verstappen had handed it to Mercedes. Starting from pole, the Dutch driver made an error at Turn 1 and had to cut across the inside of Turn 2 and hand the lead to Hamilton.

"I don’t think I braked too late but the whole first stint, I was massively struggling into Turn 1, Turn 3,4,5 so I guess here, when your cars are a bit colder after the start, yeah, I just lost a lot of grip suddenly," Verstappen explained afterwards.

Settling into second, Verstappen couldn't keep up with Hamilton's pace up front and had fallen to around three seconds behind the Mercedes as the usual story of Mercedes' enjoying slightly stronger race pace appeared to be playing out.

Ferrari brought Charles Leclerc in on Lap 14, with the Monegasque immediately going over two seconds faster on his first flying lap after the stop. The power of the undercut was evident, and Mercedes brought Bottas in on Lap 17 in an attempt to jump ahead of Verstappen.

Bottas' pace was immediate, with Red Bull immediately responding to bring Verstappen in as Mercedes opted to wait another lap for Hamilton. With Bottas setting his personal best lap of 1:36.960 as Verstappen just managed to stay in front, the Dutchman set about trying to close the three second deficit to Hamilton over his outlap.

The rest Verstappen made up on his out-lap, deploying an extra little bit of battery to ensure he was able to block Hamilton from taking the racing line into Turn 1 as they were side by side.

"My out lap was good but I didn’t expect the undercut to be so big, but when I went out I suddenly had so much more grip on the tyres everywhere," Verstappen explained.

"I don’t know how fast Lewis’s stop was or whatever, so I need to look at it again but I think nobody – including us – we never expected to undercut Lewis so it just clearly showed that with new tyres and then of course the tricky conditions out there - when you’re on used tyres of course it’s easier to lose the car a little bit or whatever because of the wind – so with new tyres you have one lap where of course everything feels a lot better. Because as soon as I was ahead the next two laps, they didn’t feel so great any more."

Back at the front, but not in command

Having snatched the lead away from the Mercedes pair, Verstappen was still in trouble. With two Mercedes drivers stalking him within DRS range, the pace was frenetic for the next eight laps as Hamilton threw everything at Verstappen in his attempts to regain the lead.

With all three on roughly identical strategies as the race reached half distance, the call for someone to switch to a two stop was obvious. Mercedes had the option of doing so, with Hamilton even radioing in to 'make sure we undercut them next time'.

But, unlike Barcelona, Sergio Perez was an obvious consideration as they would come out behind the Mexican and on tyres that would only be a few laps younger.

But Red Bull had the same idea. Despite Verstappen starting to eke out a gap of around three seconds over Hamilton, they decided against holding onto track position and called the leader in on Lap 32. It was the very early nature of this call that caught Mercedes out, as it meant that Verstappen's hard tyre stint was his shortest at just 14 laps in total.

The longest stint seen on the mediums in Friday practice was 20 laps, and Verstappen needing to eke out 21 laps meant that it wouldn't be completely plain sailing to get to the end of the race. But, the aggression of the call meant that Mercedes couldn't follow suit without losing position to both Red Bulls and then having to chase after them on only marginally fresher tyres. So Mercedes stayed out, now trapped in the same position that they themselves had trapped Red Bull in Barcelona. 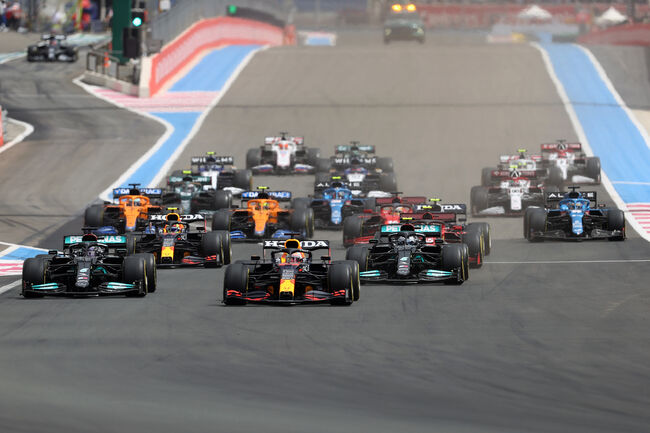 From there, it was a delicately balanced push from Verstappen to catch up on Valtteri Bottas. Surprisingly, the Finn failed to slow the Dutch driver down for even a single corner, as Verstappen essentially breezed past after Bottas made an error defending thin air at the chicane.

Verstappen's laptime on that lap was only 0.4 slower than on his previous lap, and he quickly pulled away. Hamilton's pace, around 1:38.0 on average at this point, was about 0.5 slower than Verstappen and the Red Bull quickly homed in. From there, defence was pointless, as the reigning Champion elected against losing further time to the charging Sergio Perez behind.

"Tthere’s marbles on the inside, so I didn’t want to make my tyres any worse than they already were," said Hamilton.

"He had the DRS open, so if he didn’t pass me there, he would have passed me the straight afterwards, so it would have made zero difference and I just had no front end, so he would have got me either way. It was pointless to defend any harder. I think you saw what happened to Valtteri – just ended up going straight on. So, there was no point messing up the tyres any more."

What could Mercedes have done differently?

The biggest error that Mercedes made in the race was bringing Hamilton in two laps later than Bottas. Putting faith in their data, the pit box sat empty on Lap 18 at a time when it would have been very obvious to Mercedes that Verstappen was going to pit to cover off their own undercut attempt from Bottas.

This blind faith in their data meant handing Verstappen at least two seconds of recovered time, with the slight pit lane time loss and Verstappen's outlap pace making up the remaining second.

Once that track position was taken away from them, a two stop strategy may also have worked but would have required an even earlier call than what Red Bull did. It would also have required coming from further back and negotiating past Perez who, as mentioned, wasn't on particularly old tyres himself.

But, as Mercedes were still committed to a one-stop strategy, they left Hamilton out to ensure his second stint, on the hard tyre, wouldn't be as tough.

"It was sort of uncomfortably early to go to the end," Andrew Shovlin told media, including RacingNews365 afterwards.

"Which, when you see how the race played out, you saw that that was the case. And also the concern on Valtteri's car was that he was getting an increasing vibration that was getting worse and worse, every lap, that was starting to get to levels where we will box the car for reliability concerns.

"So really, the focus was on making sure that we didn't have an issue on track with him, so that was why we did it. In reality, Valtteri's stop triggered the pit stops at the front of the grid. And that was what drove us to having to do a very long, long stint with Lewis."

In a race that had no interruptions or Safety Cars, it was astonishing to see just how evenly matched the two differing strategies played out for two different drivers from two different teams; both of whom absolutely extracted the maximum they could from their respective plays.

Had Bottas managed to hold Verstappen up for even a single lap, could that have made the difference for Mercedes? What if Hamilton had opted to fight harder than he did, could he have stopped a last lap charge as the Dutch driver would have ended up in dirty air for a lap? If the rest of the season is to be decided on such fine margins, then bring it on..