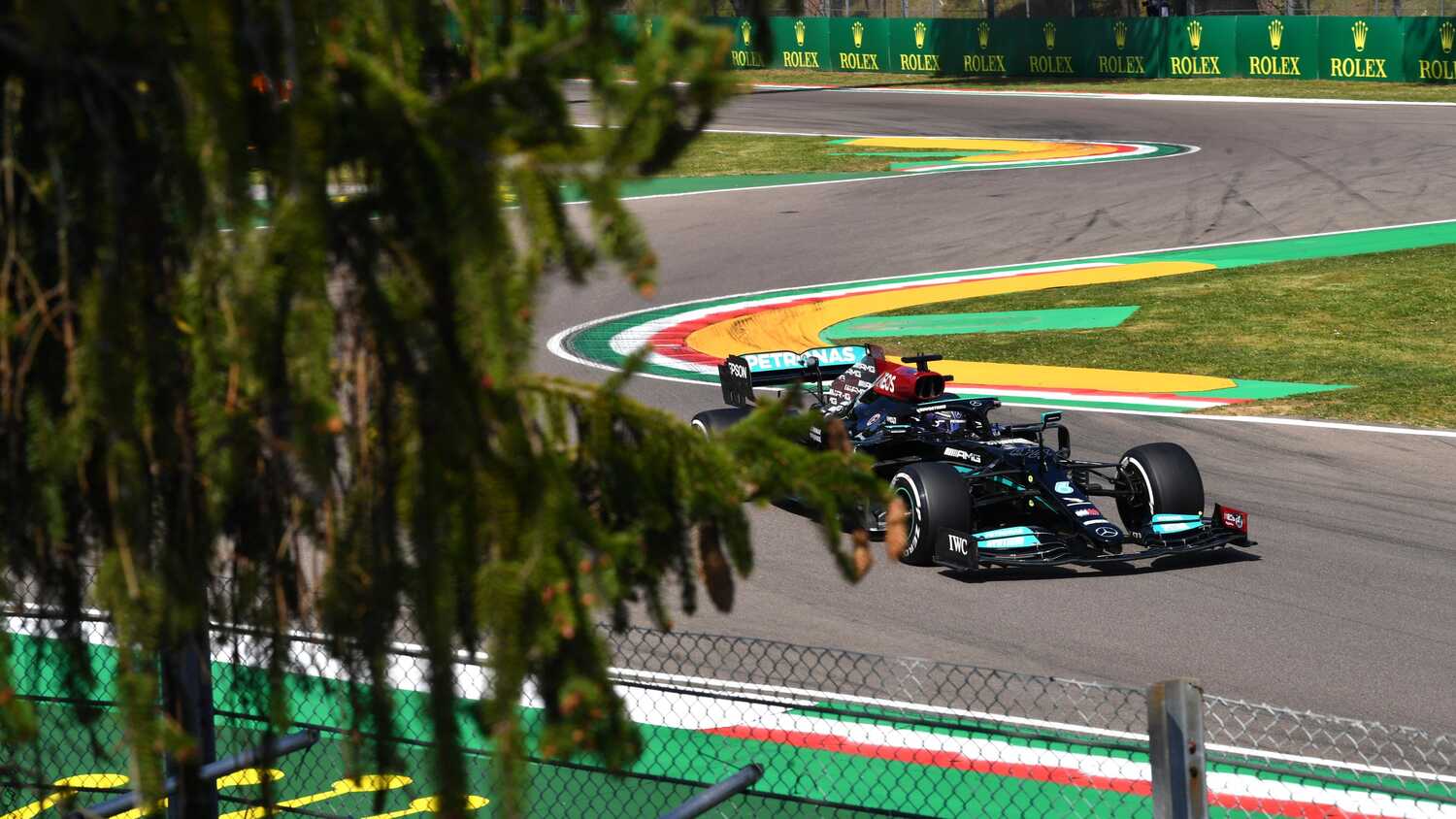 Lewis Hamilton has taken pole position for the Emilia Romagna Grand Prix at Imola, after putting in the pole time on his first run in Q3.

The Mercedes driver set a 1:14.411 to pip Max Verstappen's Red Bull on the first run, before the final climactic moments.

Moments later, McLaren's Lando Norris crossed the line to miss out on pole by just half a tenth after setting purple sectors through the first and second sector. However, his time was deleted for running wide at Piratella on that lap.

Red Bull's Sergio Perez then crossed the line to snatch the front row place from Verstappen, setting a time just 0.035 down on Hamilton's. The Mexican driver starts on the soft compound tyre, with the Mercedes on the medium.

Verstappen had to settle for third, admitting to making an error on his final run. The Dutch driver will also start on the medium compound tyre. Charles Leclerc finished fourth for Ferrari, with Pierre Gasly in fifth for AlphaTauri.

Daniel Ricciardo took sixth for McLaren, outqualifying Norris who had to settle for seventh as a result of his time being deleted.

Last season's Imola pole-sitter Valtteri Bottas, also on mediums, had to settle for just eighth place, with Esteban Ocon in ninth for Alpine and Lance Stroll rounding out the top ten for Aston Martin.

With Q2 being the all important session for determining the tyres drivers will start the race on, the two Mercedes drivers, the two Williams drivers and Verstappen were the only ones confident enough to try the medium compound.

Hamilton set the pace on the medium, pipping Verstappen by just 0.067 seconds with Bottas settling into third place.

With the others running the soft compound, Perez jumped to the top at the end of Q2 with a 1:14.716, with Norris vaulting up to second just 0.002 behind. Leclerc went third for Ferrari, pushing the medium tyre trio down to fourth, fifth and sixth.

Hamilton and Verstappen both came out again on the soft compound, but aborted their laps to ensure they wouldn't improve their times once they were certain of making it into Q3.

Carlos Sainz was eliminated in 11th place, just 0.061 away from getting into Q3, with George Russell having to settle for 12th for Williams after switching to the soft.

Sebastian Vettel placed 13th for Aston Martin, with his first time deleted for running wide. Nicholas Latifi was 14th, ahead of Fernando Alonso in 15th for Alpine.

The first part of qualifying had only barely gotten underway when it had to be stopped after just five minutes. This was due to Yuki Tsunoda crashing his AlphaTauri at the Variante Alta chicane.

The Japanese driver lost control of the rear of his AT02 and spun off into the barrier. He was uninjured and hopped out while the session was delayed for a few minutes.

Once it resumed, Bottas set the pace with a 1:14.672 on the soft tyres to pip Hamilton by a tenth.

Alfa Romeo's Kimi Raikkonen and Antonio Giovinazzi were eliminated in 16th and 17th, with Haas' Mick Schumacher and Nikita Mazepin in 18th and 19th respectively, joining Tsunoda on the sidelines after the Q1 session.

Both Williams drivers made it through into Q2, with Latifi finishing in 12th ahead of Russell in 14th.