The Mercedes driver set the pace in Imola as Max Verstappen suffered a driveshaft failure and came to a halt, losing valuable track time. 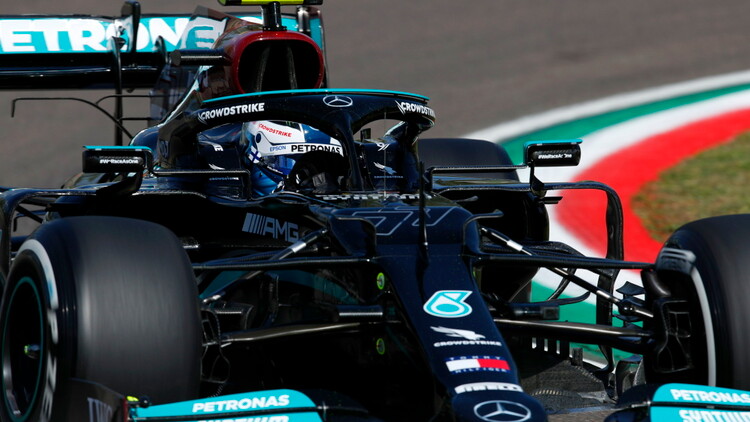 Bottas led a Mercedes 1-2 with Lewis Hamilton just 0.010 seconds slower than the Finn. Unusually, both Mercedes drivers set their fastest lap times on the slower medium tyre compound rather than the soft tyres.

The other major story from Friday was Max Verstappen coming to a halt on the main straight. Verstappen said "something snapped on the rear" of the car on the exit of the final turn.

Red Bull believe it was a suspected drive shaft failure which brought Verstappen to a stoppage after just five laps of running.

Teammate Sergio Perez could only manage sixth place, over eight tenths of a second behind Bottas leaving Red Bull with a lot of work to do to if to provide a challenge to Mercedes in Imola.

Pierre Gasly in the AlphaTauri was a surprise third fastest on the soft tyre compound, only 0.078 seconds slower than Bottas' leading time.

Charles Leclerc brought the session to an early end after he crashed at the final corner. The 23-year-old lost the rear of the car and hit the barrier, damaging the front-right corner of the car.

Ferrari had a strong day up until Leclerc's crash. Carlos Sainz was fourth whilst Leclerc still ended the session in fifth.

Leclerc actually posted the quickest time of the day in FP2 on a 1:15.3, but his lap time was deleted due to the Ferrari driver running wide at Turn 9.

Further back, Antonio Giovinazzi impressed in the Alfa Romeo to be ninth quickest, ahead of Lance Stroll in 10th place.

Nicholas Latifi backed up his top 10 result in the opening practice session with the 12th fastest time, as McLaren's Daniel Ricciardo struggled with his one lap pace down in 18th.