AlphaTauri's Pierre Gasly has topped the times in final practice at Istanbul Park, ahead of Red Bull's Max Verstappen and Sergio Perez. 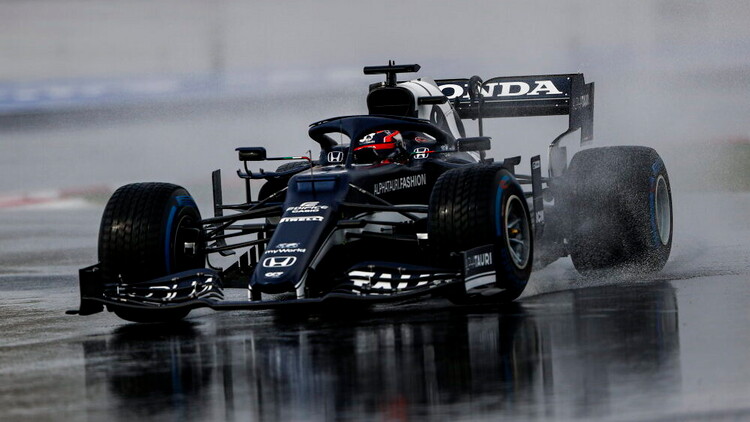 AlphaTauri's Pierre Gasly has set the pace in final practice for the Turkish Grand Prix, posting the fastest time during a largely wet session as rain belted down ahead of FP3 at Istanbul Park.

While the drivers initially headed out on the Wet tyre, it quickly became apparent that the Intermediate was the correct choice for the conditions, with the Wet suffering from some overheating.

Early times from Gasly, Lando Norris and Carlos Sainz saw them lead the way, before Gasly had a very dramatic spin just before the halfway point of the session. He was able to continue without picking up any damage.

With the sun peeking through at the half-hour mark, the track began rapidly drying and, while still on the Intermediate tyres, the times began to tumble.

Max Verstappen jumped to the top, before his time was beaten by Red Bull teammate Sergio Perez by more than two tenths. Gasly then went quickest overall with 15 minutes remaining, the French driver clocking a 1:30.447 to go quarter of a second clear, and half a second up on Verstappen.

Verstappen also had a spin during the session, losing the rear of his Red Bull going through Turn 9.

Gasly's time would go unbeaten until the end of the session, with Verstappen rising to become the nearest challenger right at the chequered flag. He set a time just over a tenth down on Gasly, and pipping what Perez had managed.

Mercedes' Lewis Hamilton, having set the pace throughout both practice sessions on Friday, finished down in 18th after a largely unrepresentative session. He didn't come out onto track in the first 20 minutes, put in one lap that briefly went fastest at that point of the session, but withdrew very early back to the garage as Mercedes didn't do much mileage with either of their drivers during the session.

Ferrari continued to show strong pace, with Sainz and Charles Leclerc finishing in fourth and fifth respectively as they were consistently close to the top of the times throughout the session.

Alpine's Fernando Alonso finished in sixth, recovering from a spin at Turn 1, while Alfa Romeo's Kimi Raikkonen was seventh. The Finn was almost involved in a pit lane incident with Haas' Mick Schumacher, with Alfa Romeo quickly getting on the radio to tell Raikkonen to stop to prevent a collision between the pair.

AlphaTauri's Yuki Tsunoda was eighth, and was left frustrated after being impeded by Perez through Turn 10 on a fast lap.

Mercedes' Valtteri Bottas finished in ninth, with Esteban Ocon down in 10th in the second Alpine.

Alfa Romeo's Antonio Giovinazzi was 11th, with Aston Martin's Sebastian Vettel in 12th and another one of the drivers to be caught out by the lack of grip at Turn 9. Schumacher finished in 13th, with McLaren's two drivers having a quiet session in 14th and 15th with Ricciardo and Norris respectively.

Lance Stroll was 16th for Aston Martin, with Haas' Nikita Mazepin in 17th ahead of Hamilton.

Williams filled the final two spots, with Nicholas Latifi in 19th and five seconds away from the pace set by Gasly, while George Russell finished in 20th. The British driver spun off just before the halfway point of the session, losing the rear of his car while powering through Turn 2. This triggered a brief red flag while the car was recovered.

The wet conditions are expected to clear up significantly ahead of qualifying, which takes place just two hours after the end of FP3.