Red Bull's Max Verstappen has taken an emphatic pole position for the Dutch Grand Prix, delighting the home fans as he beat both Mercedes drivers to top spot. 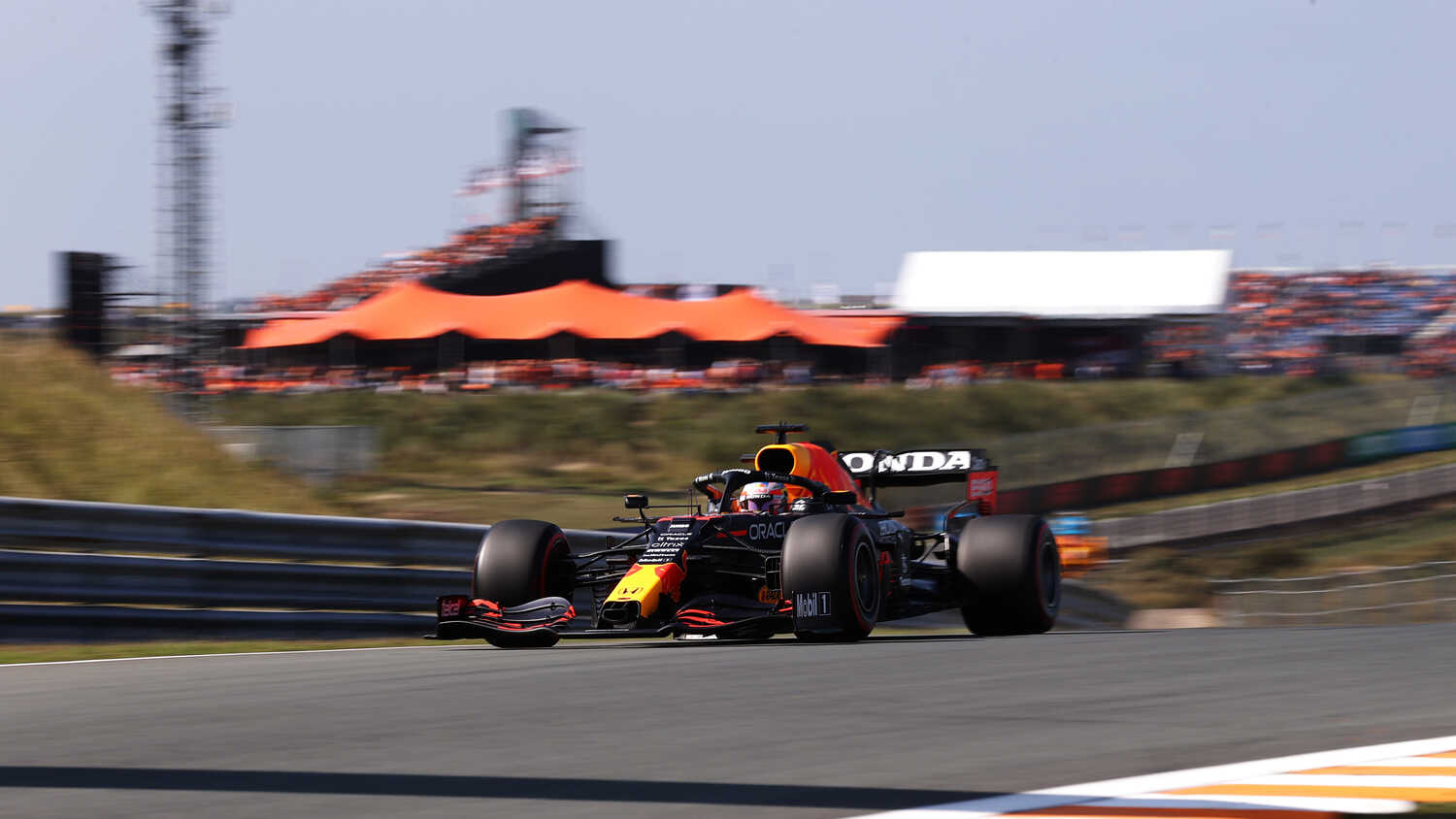 Max Verstappen will start his home race from pole position, sending his exuberant fans wild as he romped around the Zandvoort circuit in a time of 1:08.885 to finish just 0.038s clear of his title rival Lewis Hamilton.

Verstappen set a 1:08.923 on his first run in Q3 to give himself a strong banker lap, finishing three-tenths clear of Mercedes' Valtteri Bottas.

But the second runs proved intense, with Verstappen improving by just 0.038 seconds to set his pole time of 1:08.885, before Hamilton crossed the line with a massive improvement. Hamilton's second lap time was, to the thousandth, identical to Verstappen's first time.

With the two title rivals sharing the front row, it was Bottas who had to settle for third place with a time 0.337s away from Verstappen's, while Pierre Gasly took fourth place for AlphaTauri after another strong performance from the French driver.

Ferrari's Charles Leclerc led an all-Ferrari third row as he finished 0.642s away from the front just 0.010s ahead of Carlos Sainz in sixth.

Alfa Romeo's Antonio Giovinazzi finished a stellar seventh with his highest starting position of the season so far, with Alpine's Esteban Ocon and Fernando Alonso finishing qualifying in eighth and ninth respectively. McLaren's Daniel Ricciardo rounded out the top 10.

Verstappen topped the times in Q2 ahead of Leclerc and Gasly, but the session was marred by two separate red flags for two crashes – both for the Williams drivers.

With four minutes remaining in the session, George Russell lost the rear of his Williams entering the final corner while on a lap that likely would have secured him a top 10 position. The British driver tapped the barriers with his rear-left corner and the red flags were shown instantly, despite him being able to get his car out of the gravel and back to the pits.

While the damage was apparently quite minor, Williams opted for caution and not to rush checks to get Russell back out on track for the restarted session. Moments after the session went green again, Nicholas Latifi lost control of his Williams into Turn 6 and speared off backwards into the barriers. It was a much bigger impact than Russell's, with the Canadian sounding winded over the radio as he confirmed that he was OK.

With the session red-flagged again, the decision was made not to restart the session.

Along with the two Williams drivers being eliminated in Q2, Aston Martin's Lance Stroll was knocked out in 12th place, while McLaren's Lando Norris was a surprise drop-out in 13th. Norris seemed to struggle for pace throughout qualifying, and the red flags prevented any opportunity for a last flying lap to try to get out of the drop zone.

AlphaTauri's Yuki Tsunoda was the last eliminated at this stage, with the Japanese rookie finishing in 15th.

Leclerc set the pace in Q1 with a 1:09.829 on the Soft compound tyre, setting his time right at the chequered flag to eclipse Verstappen, after the Red Bull had been on top for the majority of the session.

With the track evolving to yield almost a second of lap time over the course of the 18-minute session, it ended up a Ferrari 1-2 as Sainz slotted in behind Leclerc after making it into qualifying. The Spaniard gave his mechanics a headache after crashing heavily in FP3 but was able to get out on track at the start of Q1 to finish second at the chequered flag.

Verstappen finished third after setting his time early in the session, ahead of Giovinazzi, Latifi and Hamilton. The two Mercedes drivers set their best times on the Medium compound, with both Hamilton and Bottas ending in the top 10.

There were two big scalps from Q1, with Red Bull's Sergio Perez finishing in 16th and 0.7s away from the front. Aston Martin's Sebastian Vettel was 17th, after the German encountered slow traffic at the end of his final flying lap. Vettel steamed up behind the two Haas drivers, and had to slam on the brakes to avoid a collision with Nikita Mazepin, with the stewards set to investigate the incident.

Alfa Romeo's Robert Kubica, who stepped into the car on Saturday morning to replace the ill Kimi Raikkonen, qualified in 18th, with Haas drivers Mick Schumacher and Nikita Mazepin in 19th and 20th respectively.