Hill questions whether Wolff/Horner rivalry is a 'front'

The 2021 F1 season has seen a tense battle play out between Mercedes and Red Bull both on and off the track, but Damon Hill wonders if the rivalry between team bosses Toto Wolff and Christian Horner is all that it seems. 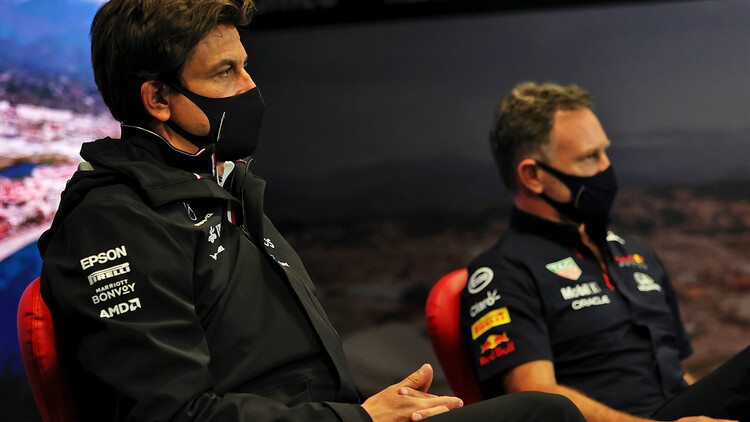 Damon Hill has questioned whether Toto Wolff and Christian Horner's tense relationship is actually a "front".

The former F1 driver admits that the battle that has played out throughout the 2021 season between Mercedes and Red Bull must have been tough for all involved, but wonders if the two parties might be able to make amends in the future.

"It's just so sad, that you have these two camps," Hill told the F1 Nation podcast.

"They're both experiencing all the pressure, and all the same [or] similar kind of experiences. The victories, the defeats, and the kind of rivalry and all that they're experiencing.

"But they can't share it together, do you know what I mean? Maybe one day, when the war is over, they'll be able to have a cup of tea together."

When asked whether Wolff and Horner - respective team bosses of Mercedes and Red Bull - might ever make up after some bitter exchanges during the year, Hill speculated whether the rivalry is all that it seems.

"I think Christian made it abundantly clear in Qatar that he wasn't going to do that," Hill said.

Hill's fellow podcast host and Sky Sports F1 presenter Natalie Pinkham disgarees with this idea, though, and thinks that there are similarities between Wolff and Horner's relationship and that of their drivers Lewis Hamilton and Max Verstappen.

"I don't [think it's a front]," she explained. "I think they're very different people, who actually probably wouldn't really enjoy a beer together.

"I just think they're different people. They're both great, but they're very different and it's the same with Max and Lewis.

"They don't dislike each other, but they would never sit down and have a natter and a bowl of pasta together. I think we're talking about very different characters."