Lewis Hamilton has won the Saudi Arabian Grand Prix, despite several controversial moments between himself and title rival Max Verstappen. 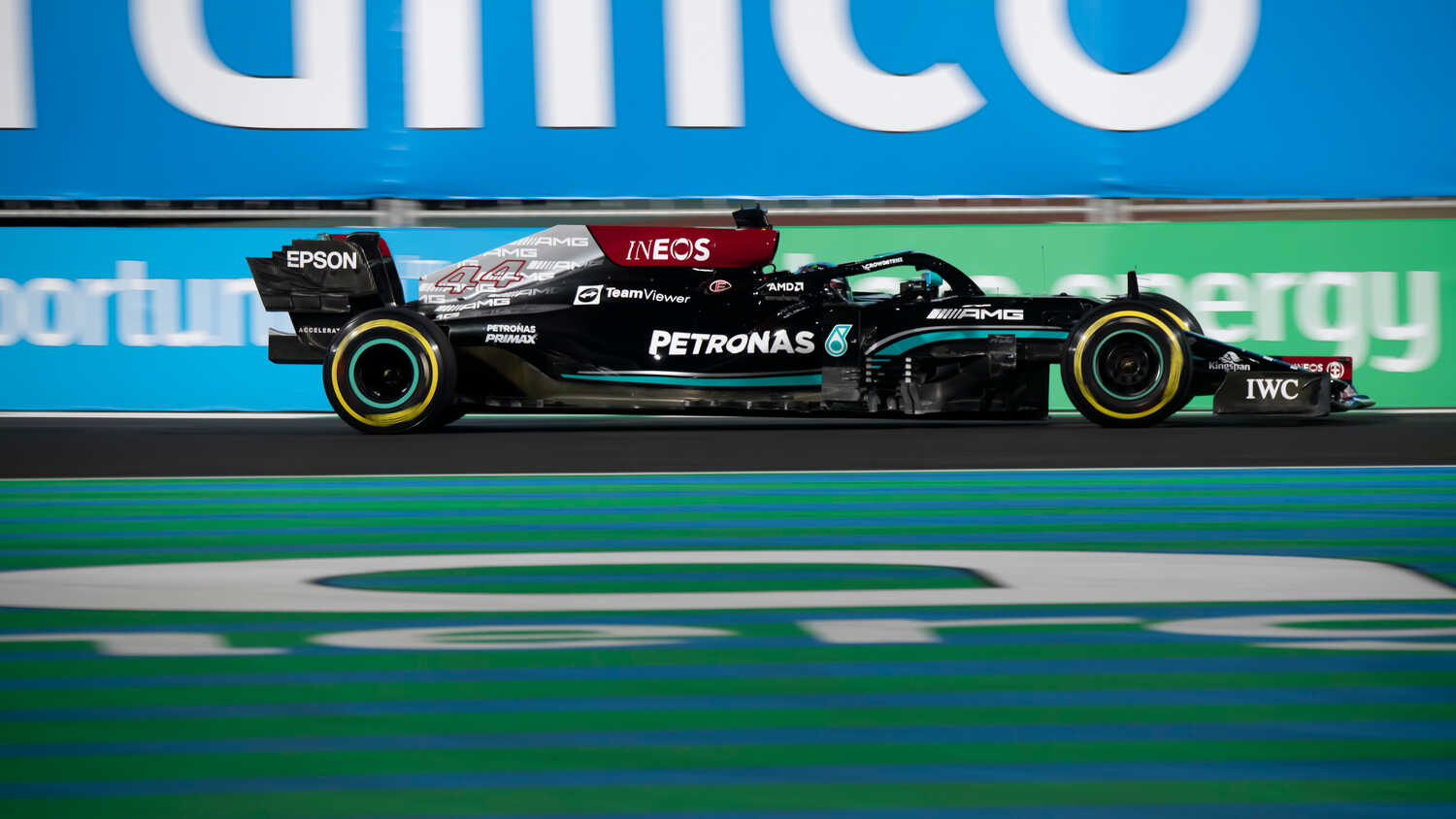 Mercedes' Lewis Hamilton has won the Saudi Arabian Grand Prix at the Jeddah Corniche Circuit, after a race marred by drama and various Safety and Virtual Safety Car interventions.

At the original start of the race, Hamilton comfortably led the field away as Valtteri Bottas slotted into second, with Max Verstappen stymied in third.

The status quo was maintained for the first 10 laps as the three leaders pulled away from the cars behind, but the complexion of the race completely changed as Haas' Mick Schumacher crashed heavily at Turn 22. This brought out the Safety Car, with both Mercedes drivers choosing to pit and swap to a fresh set of Hard tyres.

Crucially, Verstappen stayed out on track and, with the race red-flagged on Lap 14 of 50 due to the damage to barriers at Turn 22, was able to retain the lead ahead of both Mercedes drivers as the race stopped.

Upon the restart, Verstappen was slow off the line and this allowed Hamilton to have the high ground into Turn 1. Verstappen attempted to go around the outside of Hamilton and, instead, clambered over the kerbs. The clumsy overtake allowed Alpine's Esteban Ocon to get ahead of Hamilton, while the race was red-flagged once again as there was carnage further behind. A clash between Ferrari's Charles Leclerc and Red Bull's Sergio Perez was the end of the Mexican's race, while there was a separate collision between Williams' George Russell and Haas' Nikita Mazepin as Russell slowed due to Perez's incident.

For the third restart, Verstappen was shuffled back to third on the grid after instruction from FIA Race Director Michael Masi, with Ocon on pole ahead of Hamilton.

While Hamilton was going up the inside of Ocon into Turn 1, Verstappen dived up the inside of both of them on his fresh Medium tyre. Managing to clear Hamilton, Verstappen then powered past Ocon out of Turn 2 to take the lead. Hamilton cleared Ocon down the main straight moments later and set off in hot pursuit of Verstappen, having started on the Hard tyre.

Things settled down for a little while as Verstappen controlled the race ahead of Hamilton, but Hamilton eventually managed to get within DRS range of Verstappen to make a move down the pit straight.

Verstappen then ceded position to Hamilton once again down the back straight, before immediately taking the position back at the last corner. However, with his ageing Medium tyres giving up, Verstappen was unable to hold off Hamilton and the Mercedes driver cantered home, setting the fastest lap along the way.

Verstappen had to settle for a distant second, having been given a five-second penalty for going off-track and gaining an advantage at Turn 1. The eight-point swing towards Hamilton means the Drivers' Championship is level heading to the season finale in Abu Dhabi.

The final place on the podium went to Bottas, who managed to just pip Ocon across the line as the Finn used DRS to finish less than a tenth clear.