Mercedes' Valtteri Bottas has gone quickest in the first practice session at Imola for the Emilia Romagna Grand Prix, while the session was red-flagged for 10 minutes due to a collision between Sergio Perez and Esteban Ocon. 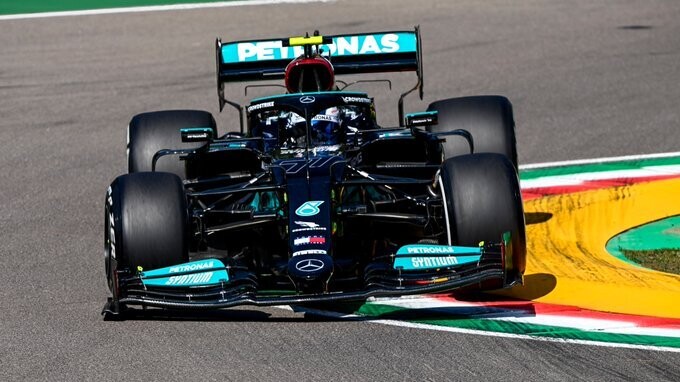 Mercedes' Valtteri Bottas has gone fastest in the first practice session at Imola, ahead of Sunday's Emilia Romagna GP.

Bottas led a Mercedes 1-2, ahead of Lewis Hamilton, after snatching top spot away from his teammate with less than three minutes remaining. Bottas set a 1:16.564 to finish just 0.041 ahead of Hamilton, with Max Verstappen finishing in third for Red Bull Racing.

Charles Leclerc finished in fourth place for Ferrari, just over two tenths away from top spot, while Pierre Gasly was fifth for AlphaTauri.

Carlos Sainz finished in sixth place for Ferrari, having topped the time for the majority of the session until the first red flag period.

Fernando Alonso was seventh for Alpine, with Lance Stroll eighth for Aston Martin. Nicholas Latifi gave Williams some hope as he came home in ninth despite going off into the gravel late in the session, while McLaren's Daniel Ricciardo finished in tenth.

There was a brief red flag period during the session, with a collision with twenty minutes to go.

The exact circumstances are yet to emerge, due to technical issues with Formula 1's world feed for broadcasters. Footage of the incident hasn't been released, but Sergio Perez and Esteban Ocon appear to have made contact entering the Villeneuve chicane. Red Bull boss Christian Horner has confirmed contact was made between the two.Perez was left facing the wrong way with a blown left rear tyre, while there was minor right front damage to Ocon's Alpine. Both clambered free under the red flag, while the cars were recovered.

The tricky cooler conditions caught a few drivers out over the course of the hour, with Nikita Mazepin, Yuki Tsunoda and Perez all spinning off early in the session. All were able to recover to the circuit and continue.

Mazepin would bring out the red flags again right at the end of the session. The Russian driver lost control of his Haas exiting the final corner and hit the wall, forcing the session to be stopped once again.