Mercedes have locked out the front row of the grid for the Sprint Qualifying session at Monza, with Red Bull's Max Verstappen having to settle for third place. 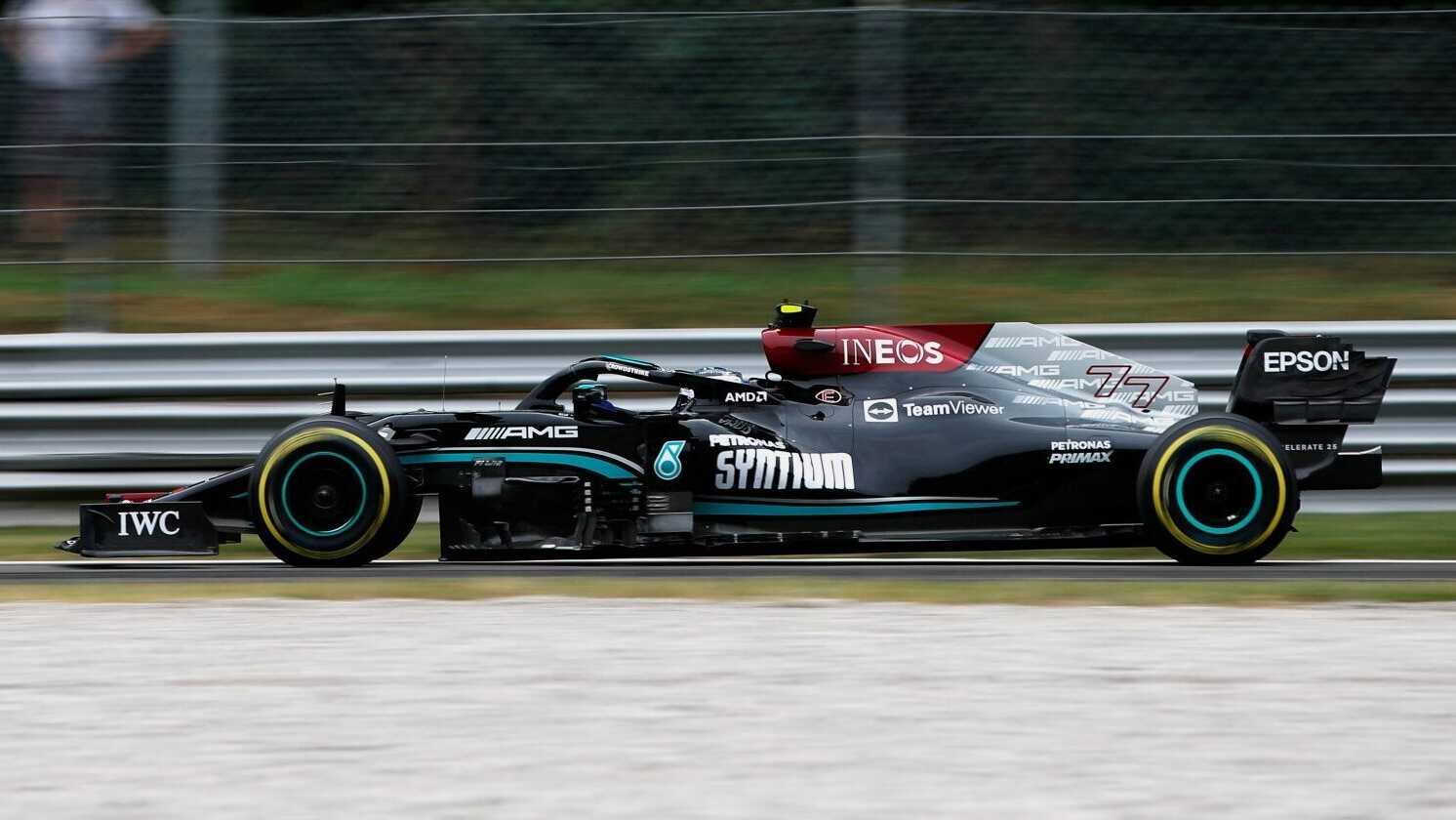 Mercedes will start Saturday's Sprint Qualifying session at Monza from the front row of the grid, although it's a somewhat surprising result as it was Valtteri Bottas who clinched top spot.

The Finn set a 1:19.555 right at the chequered flag in Q3, one of the only drivers to improve on the second runs and, ironically, was actually providing a tow for teammate Lewis Hamilton on that run.

Bottas, however, did face some bad news as Mercedes revealed that they changed the power unit in the back of his car ahead of qualifying. As this is his fourth engine of the year, he will start Sunday's Grand Prix from the back of the grid regardless of how well he does during the Sprint Qualifying race on Saturday.

Hamilton finished in second, 0.096s down on Bottas, having failed to improve on his second run in Q3 after an impressive first run to go 0.017 quicker than Red Bull's Max Verstappen.

Verstappen finished in third, having put in a stormer first lap in Q3. He wasn't able to improve on his second run either, which proved fortuitous as his second run would have placed him only sixth on the grid for Saturday's Sprint Qualifying.

Underlining the pace of Mercedes power, it was Lando Norris in fourth for McLaren and just 0.023 behind Verstappen, with Daniel Ricciardo in fifth a further 0.006s behind.

AlphaTauri's Pierre Gasly, last year's race winner at Monza, will start Sprint Qualifying from sixth position, ahead of the two Ferraris. Carlos Sainz got the better of Charles Leclerc in Q3 to finish 0.048s clear of the Monegasque, with Leclerc apparently struggling with a power unit issue during Q1 and Q2.

Red Bull's Sergio Perez could only manage ninth on the grid, after providing a tow for Verstappen on the last run and not having anyone in front of him to provide a slipstream.

Alfa Romeo's Antonio Giovinazzi, having made it into Q3 for a second consecutive weekend, claimed 10th place as he and his team celebrate their home Grand Prix this weekend.

Hamilton was fastest in the second part of qualifying, setting a 1:19.936 on the Soft tyre to finish just under a tenth of a second ahead of Bottas. The two Mercedes drivers set the pace during their first runs in Q2, and didn't improve on their second runs as they ran used tyres.

Mercedes power had a clear advantage in Q2, with Norris slotting into third behind the two factory Mercedes cars on his final run to go just 0.123s behind Hamilton.

Verstappen could only manage fourth, with a time just under three tenths down on Hamilton.

Ricciardo finished the session in fifth, just under 0.3s away from what Norris was able to manage in the other McLaren – this made it four Mercedes-powered cars in the top five with just Verstappen as the interloper.

Aston Martin weren't able to utilise their Mercedes power unit quite as well as McLaren, with both Sebastian Vettel and Lance Stroll eliminated in 11th and 12th respectively, while the two Alpines were knocked out in 13th and 14th. Fernando Alonso finished ahead of Esteban Ocon, separated by just 0.034 seconds, while Williams' George Russell finished last in Q2 and qualified in 15th.

A pit lane incident at the end of Q2 earned the attention of the stewards. In the rush to get out on track and get into the slipstreaming queue, there was a close call between Mercedes, Aston Martin and Alpine that saw two mechanics from Aston Martin and Alpine having to leap to avoid being hit by cars exiting their garages. The stewards will investigate after the session.

Mercedes were untouchable in the first part of qualifying, with Hamilton leading the way from Bottas by just over a tenth on the Soft tyre during the 18-minute session.

Norris slotted into third place, with Verstappen in fourth as traffic quickly became the biggest headache for the drivers on track.

Williams opted to run their cars while the track was reasonably quiet, with Russell and Nicholas Latifi initially knocked out in the bottom five. However, a lap time deletion for AlphaTauri's Yuki Tsunoda for exceeding track limits resulted in the Japanese driver being eliminated, with Russell promoted into the top 15.

Latifi and Tsunoda were both knocked out, with Haas' Mick Schumacher also eliminated in 18th. Alfa Romeo's Robert Kubica couldn't make it through into Q2 as he stands in for Kimi Raikkonen this weekend, with the Pole involved in an incident on a flying lap as he encountered a dawdling Nikita Mazepin at the first Lesmo. The Russian driver was slowest of all in his Haas, and the Kubica/Mazepin incident is now under investigation by the stewards.