Bottas beats Verstappen to Sprint victory, Hamilton back in fifth

Mercedes' Valtteri Bottas has won the Sprint Qualifying race at Monza, but it's Red Bull's Max Verstappen who will start the Italian Grand Prix from pole position on Sunday. 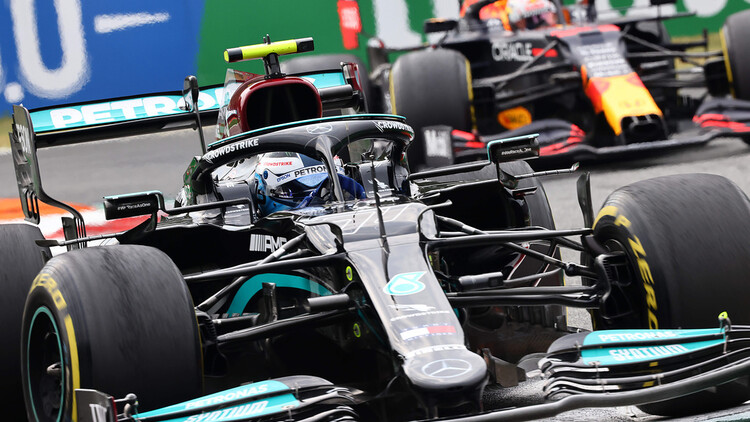 Valtteri Bottas has won the Sprint Qualifying race at Monza, with the Mercedes driver converting his starting position into victory in the 18-lap encounter.

Bottas was untouchable throughout the race, as he jumped off the line to get into Turn 1 comfortably in front. The same couldn't be said for teammate Lewis Hamilton, who started alongside him in second place.

Hamilton bogged down leaving the line, initially falling to sixth place behind the fast-starting McLarens, who were the only cars starting in the top 10 to choose the Soft tyre. AlphaTauri's Pierre Gasly also got ahead of Hamilton, but made contact with the back of Lando Norris through Turn 1. The resulting front wing damage saw his wing break off going through Curva Grande, pitching him into the barriers.

Gasly was unhurt, and the Safety Car was deployed to neutralise the race to clean up the mess.

With Bottas crossing the line to win, Verstappen was comfortable sitting behind the Mercedes to cross the line in second. Bottas will take a grid penalty for the Italian Grand Prix due to a new engine being fitted, meaning Verstappen will start Sunday's race from pole position.

Behind him, it will be McLaren pair Ricciardo and Norris in second and third, as the team's gamble to run the Soft tyres throughout paid off. Norris weathered pressure from Hamilton throughout the race, with the frustrated Mercedes driver having to settle for fifth on the road.

Ferrari's Charles Leclerc finished in sixth place, not quite able to keep pace with Hamilton ahead on the road, while Carlos Sainz slotted in behind in seventh place. The Spaniard's car was repaired in time for the Sprint Qualifying race, with Sainz having crashed late in FP2 on Saturday morning.

Alfa Romeo's Antonio Giovinazzi finished in eighth after a strong race from the Italian in front of his home crowd, while Red Bull's Sergio Perez took ninth.

Perez had an intense tussle with Aston Martin's Lance Stroll, with the Mexican driver having to yield position to Stroll after going off track passing the Canadian at the first chicane. The move is under investigation by the stewards. Stroll finished in 10th place.

All these drivers will start the Grand Prix from a position higher than where they finished in the Sprint Qualifying, due to Bottas' grid penalty.

The Sprint Qualifying results mean that Verstappen has extended his lead in the Driver's Championship. Scoring two points for finishing second, his lead over Hamilton increases to five points heading into Sunday's race.