Despite some brief forays into each other's sports, no F1 driver or MotoGP rider has successfully switched to the other category, with John Surtees the only man to triumph on four wheels as well as two back in the 1960s. What are the reasons for this? 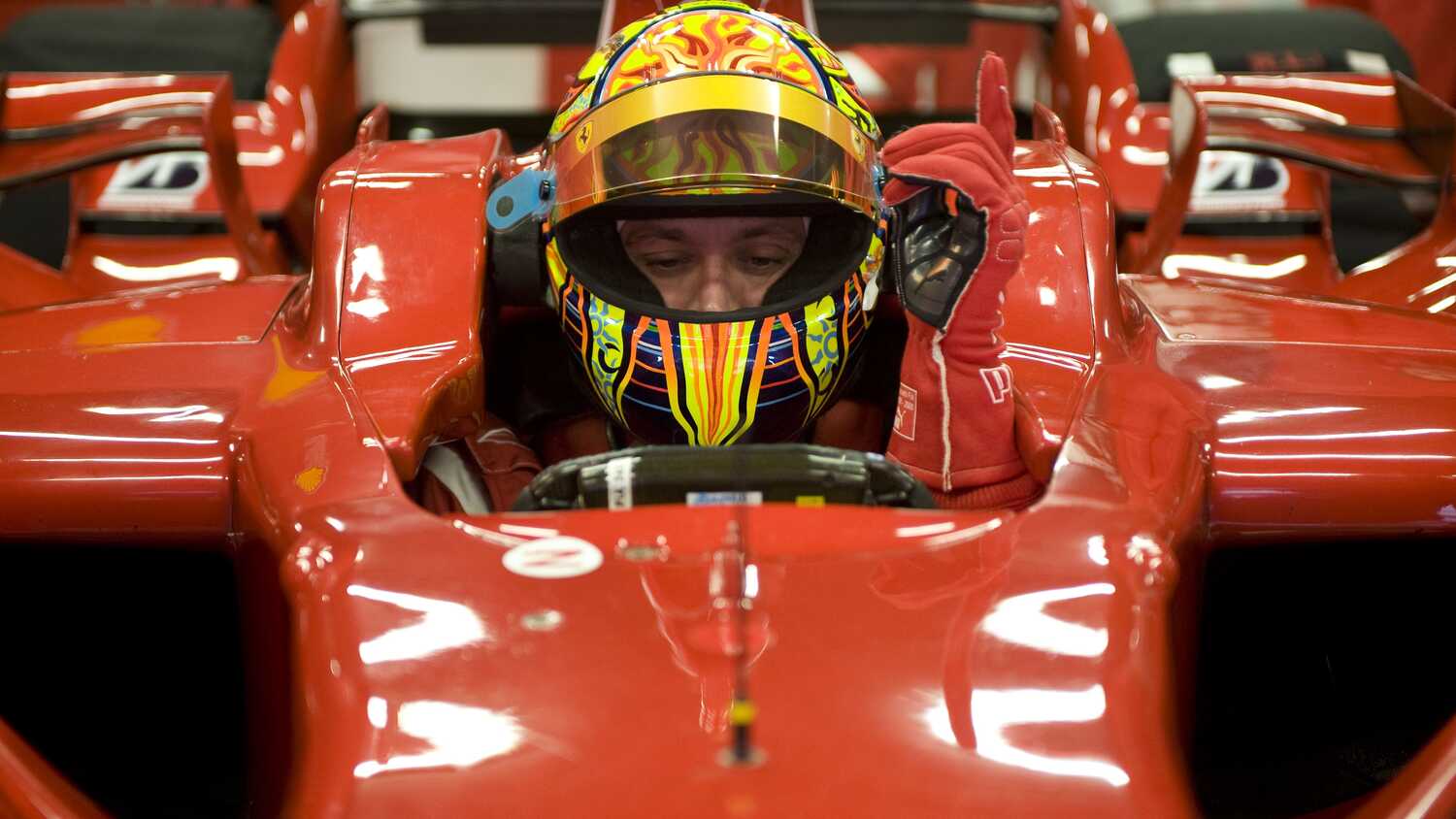 For fans of both Formula 1 and MotoGP, the idea of a successful competitor from one field moving into the other is a tantalising prospect. The desire for such a dream move to happen was reflected by the excitement surrounding the recent revelation that Valentino Rossi - known to many as the 'GOAT' of MotoGP - apparently came very close to switching to F1 following his test for Ferrari in 2004.

The Scuderia's former chairman Luca di Montezemelo has explained that a plan was discussed to bring Rossi in to the Sauber squad. But it sounds like Rossi chose not to take up the offer due to it not being with Ferrari's main team.

"Everyone knows that it was not a publicity operation, Ferrari did not need it," di Montezemelo told Motorsport.com. "At the beginning it was almost a courtesy to the desire of a great champion.

"I saw that he was going strong, especially he lacked continuity, but he had a lot of potential and desire. At one point we thought he would do a year at Sauber, but he was smart and preferred to remain number one in motorcycles than fourth or fifth in cars."

Rossi's decision was arguably a wise one in terms of success, with the Italian going on to build on his legendary status in MotoGP, where he still competes today at the age of 42. But the fact that his test run in the Ferrari impressed the team enough to contemplate offering him a seat suggests that perhaps he could have experienced similar success on four wheels.

It is clear that Rossi is the man to come closest to making the full-time switch from one category to the other in recent years. John Surtees appears to have been the only person to achieve success in both classes, yet this occured in the 1960s - so why hasn't it happened since, and will we ever witness such a feat again? 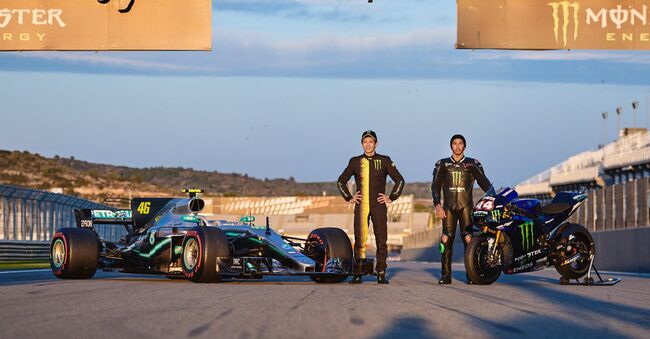 Whilst Rossi's Ferrari test in 2004 seemed to go very well, the same may not necessarily be said about his try-out of a Mercedes in December 2019. The Italian made a highly-anticipated swap with Lewis Hamilton, where each champion was able to test the other's machinery at the Ricardo Tormo circuit. But speculation mounted that the switch had not gone well when no official news was shared about the event for several days afterwards.

Hamilton went on to assure his social media followers that, despite the silence, both he and Rossi "did great" and had "no troubles", though it was later confirmed that both had spun during the test.

"The bike is so hard to ride," Hamilton told Sky Sports. "I had one little spin with it but otherwise brought it back in one piece. I was just step by step learning, but it's a very steep learning curve."

So whilst Hamilton and Rossi clearly enjoyed the swap, it sounds like it wasn't easy for either to adapt. And if two of the biggest names from each sport struggled to get to grips with the other's machinery, surely this highlights that making a full-time switch would be an incredibly difficult task.

However, Red Bull's Dr Helmut Marko seemed to believe that there was a MotoGP rider capable of the move back in 2018. The team allowed multiple MotoGP champion Marc Marquez - along with his then-teammate Dani Pedrosa - the opportunity to spend a day testing Toro Rosso cars, and Marko did not hold back in his praise for Marquez's stint behind the wheel.

"To put that kind of performance in within such a short time says everything about his huge talent," Marko said. "In the coming years he is going to break a lot more records in MotoGP. Maybe after that, Formula 1 will actually be a possibility. Up to now only a few exceptional talents, such as John Surtees, have managed to compete in both racing series.

"Marc also has what it takes. Today definitely wasn't the last time he will sit in a Formula 1 car."

Meanwhile Marquez himself called the experience the "absolute highlight" of his career and teased: "Who knows though, maybe Formula 1 will be a serious idea for me in a few years' time!"

Unfortunately, Marquez has not had the opportunity to try his hand at F1 since, and it looks unlikely to happen anytime soon, given that the Spaniard spent much of 2020 sidelined with an arm injury. But clearly - if Marko is to be believed - there was some serious potential there. 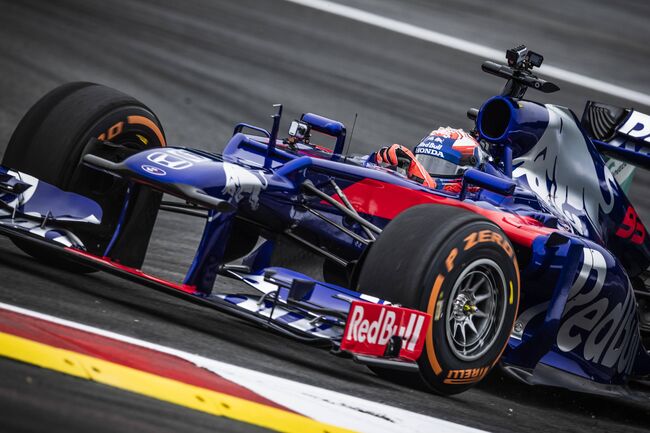 Yet still, the elusive permanent swap has never come to fruition. Whilst one test day could show potential, there are huge challenges involved in truly adapting to each category. This was something highlighted by MotoGP champion Jorge Lorenzo when he tested a Mercedes F1 car in 2016.

Lorenzo - not a man famed for modesty - declared his lap times behind the wheel to be "really competitive". But even the confident Spaniard admitted that there are vast differences between driving a Formula 1 car and riding a MotoGP bike.

"The car is so smooth, I expected a more twitchy and difficult car but in the end everything was so good: the steering wheel, the engine, everything," Lorenzo explained. "It was quite easy to drive and the car in the corners is really, really fast and the grip of the car is unreal. In the first lap you feel the power but when you get used to it, it’s similar to a MotoGP bike but in the corners, you are in a different world, about 40kph faster in the middle of the corners.

"Also, it surprised me how late you can brake, and the amount of grip the car can support in full throttle in the fast corners is insane."

Lorenzo went on to argue that he believes the transition from F1 to MotoGP would be more challenging than the other way around. "I think it would be even more difficult for Formula 1 drivers to ride fast on a bike. Basically because inside a car you feel protected and know that if you crash, your body isn't going to directly crash on the floor."

This perhaps explains Hamilton's issues with his turn on Rossi's bike.

As Lorenzo alluded to, there are big physical differences involved in each category - MotoGP riders are more exposed, and this is arguably why it is more common to see a rider being given the opportunity of testing a Formula 1 car than an F1 driver trying out the bike. For a driver to be this physically vulnerable when not experienced on the machinery could prove hugely risky, and would not be something that many teams would be keen on allowing their drivers to do.

So with this lack of opportunity to actually try out a MotoGP bike - which would obviously be very essential in contemplating a switch - it seems unlikely that an F1 driver could make the move.

And clearly, getting adjusted to the differences between each category is vital and takes a lot of getting used to. Mark Webber was on hand to witness Marc Marquez's test day in the Toro Rosso, and admitted that it could be difficult for a rider to adjust to the feel of the Formula 1 car.

The Australian explained: "I think that the position is quite unique in a Grand Prix car, lying down like you’re in a bathtub with your feet quite high, sort of sitting back with the steering wheel in front, and you can’t really see a huge amount. Even the helmet eye-port is very different to a motorcycle helmet." 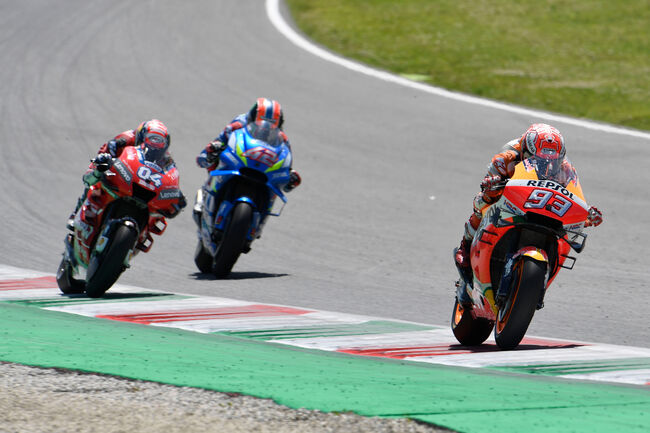 The differences between the requirements of Formula 1 and MotoGP are highlighted by the problems that can arise from tracks used by both sports. MotoGP bikes can often suffer when they take to circuits used by F1. The power of Formula 1 cars means that the track can be put under strain due to such G forces, particularly in braking zones and fast bends.

Whilst the impact this takes on the track surface might not be felt by F1 drivers, it is a different story for the stars of MotoGP. With the bikes being much lighter, such bumps and adhesions on the track can cause vibrations which make riding very challenging, and there is also an increased risk of sliding off. Clearly this is yet another unique skill that would be another new challenge for a competitor from the other category to get used to.

The fact that MotoGP can suffer as a result of Formula 1 also flags up the fact that F1 is ultimately the bigger sport, and so for a MotoGP rider to make the switch would involve not only adapting to the car but also becoming acquainted with this even more vast and complex world.

This is something that Davide Brivio has discussed. Brivio joins Alpine in Formula 1 as racing director this season after previously experiencing success in charge of the Suzuki squad in MotoGP, and he believes that the transition that he has made is more challenging than if he had been going to MotoGP from F1.

"I think it's probably harder for MotoGP to go to Formula 1," Brivio told RacingNews365.com among others. "Because Formula 1 is a bigger organisation, it's more complex and [with] many more people. So I think it's a little bit more complex, so that is a good use for me.

"I feel [there are] a lot of similarities, because [of the] teamwork, drivers that are similar in attitude to the riders. [It is] probably much more complex in terms of technicality, many more parameters, more problems [such as] aerodynamics which you don't have [in MotoGP].

"But this is a technical job. In terms of putting the team together, trying to train the group, I think there are similarities. But it is no doubt that Formula 1 is more complex than MotoGP."

If the transition is this difficult for a member of team personnel, it would arguably be even more of a challenge for a driver or rider to navigate.

It seems that the idea of whether a star of F1 or MotoGP could achieve equal success in the other category remains one of those "what if" questions to ponder over that will probably never be answered. Because if even the likes of Hamilton and Rossi have not quite managed the switch, the chances of anyone succeeding seem a long shot.