Mercedes were the talk of the F1 paddock on Friday in the United States, thanks to an unusual ride height 'trick' that was spotted in use during the race in Turkey. 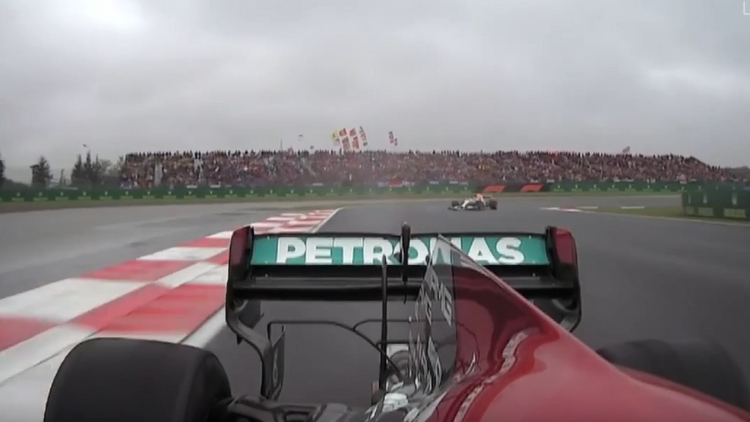 An unusual suspension ride height trick may be contributing to the recent increase in Mercedes' top speed, after plenty of head-scratching from Red Bull over recent races led them to point out a system in use on the W12.

In recent races, Mercedes have enjoyed a significant straight-line speed advantage over almost everybody, including Red Bull. This hadn't been seen in the first half of the season and, given that engine development is largely frozen and that Mercedes weren't running unusually low downforce levels, it was a topic of conversation for Red Bull in the media.

On Friday in the United States, Red Bull team boss Christian Horner began to question a 'system' that Mercedes appear to be using on their W12, which seemingly drops the rear of the Mercedes when driving down a straight to help increase straight-line speed.

TV footage showed the system was in use last time out in Turkey, with the rear of the Mercedes visibly dropping as their drivers accelerated down the pit straight.

How does it work?

While simple physics dictates that the rear of a Formula 1 car will compress into the ground under aerodynamic load, Mercedes appear to have found a way to drop the rear further to the ground as the speed of the car increases.

According to the Technical Regulations, any suspension system fitted to the rear of the car is only permitted to respond to the load that is being put through the wheels. Mercedes' system does appear to be doing so, with renowned F1 technical journalist Craig Scarborough explaining how it works on Twitter.

He explained that it's a commonly used trick up and down the grid, using collapsible rear heave springs. Mercedes appear to have found a solution to take it to a new extreme, despite being a low-rake concept car in the first place. This means that the rear of their car is already lower to the ground than the likes of the Red Bull, and was viewed as a disadvantage earlier in the season under the new aerodynamic rules.

As the speed of the car increases, downforce increases to produce a greater downward push on the suspension. This compresses the rear of the car into the ground. Once a certain point of compression is reached, the airflow under the car will stall. This will reduce drag, and downforce, and increase top speed. Being able to control when the car reaches this point of compression appears to be what Mercedes are exploiting.

Scarborough explained that "as the rear compresses, the rear heave gas spring resists the force to keep the rear end propped up. At a predetermined speed (which would be dictated by load to conform with the Technical Regulations), the load on the gas spring opens a valve, collapsing the rear to lower it and stall it."

Of course, this can't be used without very careful calibration, due to the fact that the system will collapse down when under a certain load. This would be disastrous if the driver was to suddenly enter a corner that doesn't require him to slow down sufficiently to get the car back to its normal ride height, due to the fact he wouldn't have his downforce restored. This sporadic useage may be why the system has only been noticed at this late point in the season.

It's important to note that there is nothing about this system that would make it an 'active' suspension, which is not permitted, and that the above explanation would confirm with the Technical Regulations requirements.

As expected, Mercedes are downplaying how important the system might be for them.

Much like the innovative DAS (Dual-Axis Steering) system that they introduced at the start of 2020, Mercedes say that this system is not a 'silver bullet' that explains their straight-line speed.

Team boss Toto Wolff explained on Friday that their car has been tweaked and developed throughout the season, rather than a newly-introduced system explaining their sudden uptick in speed.

"We recognise absolutely that this is a sport where competitors will always try to find out whether there is some kind of silver bullet," he told select members of the media, including RacingNews365.com, on Friday afternoon in the US.

At this point, it doesn't look like Red Bull are seeking to quickly roll out a version of the system onto their own car. The RB16B, as a high-rake concept car, already enjoys some of the advantages of rear suspension compression under load, although doesn't appear to be set up to be exploited in quite as controlled a manner as the Mercedes.

Given that the system has been spotted so late in the season, with the teams spending the remainder of the year outside of Europe, introducing a similar system wouldn't appear to be a simple matter for Red Bull.

"We've got to focus on our strengths. It's not something that they've just introduced," Horner admitted on Friday evening.

Less concerningly for Red Bull is the fact that this system isn't likely to work well at every venue, given the explanation above about corner entry speeds.

Horner added: "I think it works well at some circuits, perhaps it's not as usable at others. We will see.

"We've got some interesting venues coming up that have got all kinds of different challenges so it's going to stretch both teams to the limit.

"Obviously 2022 is a big factor within all the teams at the moment, so it's making the best of what we have. If there's something that we can get on the car, obviously we will."