On this day: Was Fangio's final victory F1's greatest ever win?

Juan Manuel Fangio's final Formula 1 victory was at the fearsome Nurburgring Nordschleife on 4 August, 1957, and the Argentinean superstar had to work very hard for it.. 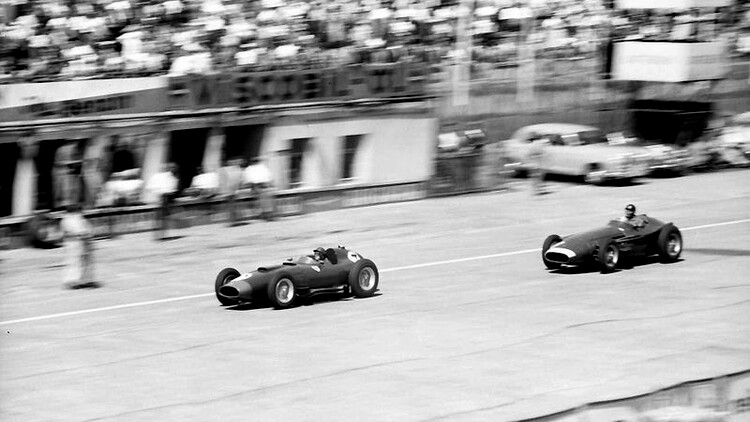 Five time Formula 1 World Champion Juan Manuel Fangio's statistics still keep the late Argentinean near the top of the contemporary record books, thanks to the extent of his skilful domination of the sport during the 1950s. Arguably his greatest victory, the 1957 German Grand Prix was the last in a glittering career and happened on this day 64 years ago.

Dapper and sophisticated, Fangio often looked almost casual as he piloted his cars at breakneck speeds through the hazards of 1950s Formula 1. He also had a knack for jumping ship from teams to join the next new dominant force, and won titles for four different teams, as well as a win record of 24 wins from 52 races, almost 50% of the races he entered.

By 1957, Fangio's career was drawing to a close at the age of 46. Still feeling as quick as ever, he fought for the title against Vanwall’s Stirling Moss, and Ferrari’s Luigi Musso.

Driving for Maserati in the infamous 250F, Fangio headed to the fearsome Nurburgring Nordschleife with the prospect of being able to claim the title at that race.

A strategic gamble from Maserati

Things got off to a great start for El Maestro, claiming pole position, while Musso would line up in 8th place.

Tyres played as big a part in 1957 as they do in modern day F1, with the abrasive nature of the Nurburgring’s tarmac being a major consideration for all the drivers.

During practice, Maserati decided against trying to run non stop, and opted to stop at the halfway point to refuel and change tyres. Running lighter would also ease the stress on the tyres and would allow Fangio to run at a higher pace.

The Ferraris opted for a more traditional nonstop strategy, running with full tanks and harder tyres to get through the whole race. Onwards then to the race, where the sun baked the surface of the track on a boiling hot day in Germany. Fangio made a sloppy getaway and this allowed Mike Hawthorn to take the lead. He led for the first two laps, which was around twenty minutes of racing at the Nordschleife, with an average laptime of around 9:30.

Fangio managed to take the lead on Lap 3, and set about increasing his lead over the next 11 laps, sprinting towards his pitstop. He set a series of lap records on the way to his stop, which were not the four second turnarounds that a modern F1 viewer would be familiar with.

Pitting on Lap 13 of the 22, Fangio’s pit stop took an age, even by the standards of the day. Getting out of the car to change to a fresh set of goggles wasn’t particularly unusual, but the mechanic who dropped a wheel nut under the car was. Failing to notice the mistake immediately, finding the nut took almost thirty seconds and, by the time Fangio was leaving the pitlane, over a minute had passed, and he was over 40 seconds behind the leading Ferraris of Hawthorn and Peter Collins.

However, instead of immediately putting the hammer down and setting off after the Ferraris, Fangio decided to use his experience and craftiness to lull them into a false sense of security.

On his outlap, Lap 14, Fangio pushed hard, but was already thinking ahead. Following up on Lap 15 with a completely average lap time, the intention was to convince Ferrari that Fangio was no longer a danger and couldn't possibly catch up.

Ferrari team manager Ramolo Tavoni was fooled and held out pit instructions for his leading drivers to hold their pace steady. In those pre pit radio days, this was the only form of communication with drivers, and the long 14 miles of the Nordschleife meant that the drivers were usually unaware of what was going on behind them.

With the Ferraris now holding station, Fangio dropped the hammer and immediately made use of his first 14 miles, pulling in the Ferraris at almost a second per mile. While Ferrari immediately spotted Fangios tactic, it was yet another 14 miles before they could inform their drivers to push, but the damage had already been done.

Fangio had halved the gap already, and then set off on a magnificent set of fastest laps, each successive lap smashing the lap record, which he himself had set during his first stint before his pit stop.

At his fastest, Fangio set a lap of 9.17, which was almost ten seconds faster than his own pole time of 9.26. Wrestling his Maserati faster and faster through the Nurburgring’s 170 odd turns, by Lap 21 he was dancing and darting around behind the two Ferraris who, by now, were also pushing as hard as they could.

With only one and a half laps to go, Fangio passed Peter Collins to take second place at the Nordkurve.

Rapidly chasing down the leader, Hawthorn, he had more of an issue passing him, but eventually made a move stick, with two wheels on the grass, at Breidscheid.

Hawthorn fought hard, now also light on fuel, and only fell four seconds behind Fangio over the remainder of the race.

But, despite his bleak prospects after his pitstop, Fangio emerged the victor, after a scarcely believable three and a half hour duel.

Speaking about the race years later, Fangio would say: "That day I had everything turned on and firing on all cylinders. I was ready to do anything. Whichever way you look at it, it was an extraordinary race.

"When it was all over I was convinced that I would never be able to drive like that again – never. I had reached the limit of my concentration and will to win. Those were the two things that allowed me to take the risks I did that day. I knew I could win, but I knew equally I could lose. I was stretching myself to the limit, and afterwards the car was covered with grass and dirt. I was trying out new things, pushing myself further at many blind spots where I had never before had the courage to go to the limit.

"I was never a daredevil, never a spectacular driver. I would try to win as slowly as possible. Until that race I had never demanded more of myself or the cars. But that day I made such demands on myself that I couldn’t sleep for two nights afterwards. I was in such a state that whenever I shut my eyes it was as if I were in the race again, making those leaps in the dark on those curves where I had never before had the courage to push things so far.

"For two days I experienced delayed-action apprehension at what I had done, a feeling that had never come over me after any other race, a feeling that still returns to me this day when I think about that time.

"I had never driven as I drove then, but I also knew I’d never be able to go so fast again – ever."

This was oddly prophetic, as Fangio would never win another Grand Prix, and had retired from the sport within a year.

Friend and team mate of Fangio, Stirling Moss, said this about Fangio’s final, and greatest, victory: “This was one of the classic drives of all time, by perhaps the greatest driver of all time. I was witness to it, and in fact I finished fifth in that German Grand Prix. I know the word ‘incredible’ is much devalued these days but what Juan Manuel Fangio did on the 4th of August in 1957 was, and remains, absolutely that.”