Outgoing FIA President Jean Todt says Mercedes deserved to have more recognition for their 2021 F1 campaign, after Lewis Hamilton and Toto Wolff elected not to attend the FIA Prize-Giving Gala. 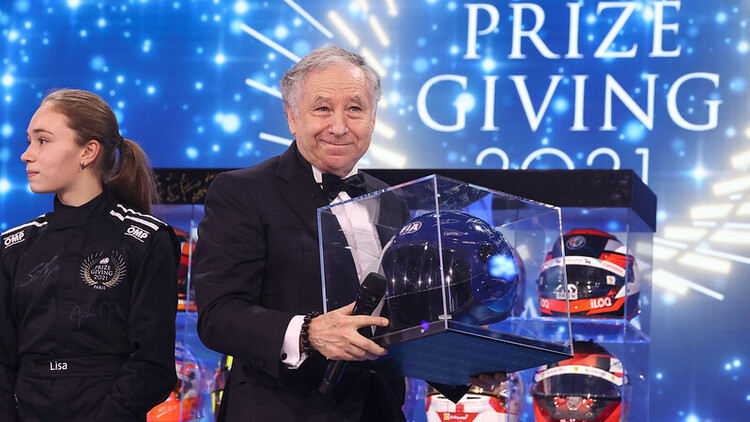 Jean Todt, the outgoing FIA President, says he would like to have seen Mercedes properly represented at the FIA Prize-Giving Gala, after Lewis Hamilton and team boss Toto Wolff chose not to attend the ceremony in Paris.

Despite their victory in the Constructors' Championship, Mercedes only sent along Chief Technical Officer James Allison to collect the award, and Todt said that the focus of the evening should be on celebration, rather than contentious issues.

"I think tonight we should celebrate, rather than trying to get into any kind of controversy. There is no point. What would it give?" Todt said in response to a question from RacingNews365.com.

Hamilton and Wolff elected not to attend the ceremony after the Abu Dhabi Grand Prix ended in controversy due to the Race Director allowing certain lapped cars to unlap themselves and give Max Verstappen clear passage to attack Hamilton on the final racing lap.

Todt said that he feels sorry for Mercedes, as they should have been able to enjoy the recognition of the title at the ceremony.

"I think, in a way, I feel sorry, because Mercedes should have much more reward, as eight-time World Champion for the manufacturers is unique," he said.

"But this young guy [Verstappen] has made an outstanding job, and that's what we should focus on, rather than saying, 'Are we going to punish [Hamilton], because he's not coming?'

"He [and Mercedes] has been an amazing combination. Probably [the] best car, and best team and he never does a mistake.

"This time simply [Max] won 10 Grands Prix and we should find that remarkable."

Trying to keep focus on the positives, Todt heaped plaudits upon the new Drivers' Champion as he said Verstappen had proven himself as the best in the sport.

"I think he gets what he deserves. He did a great season," added Todt.

"It's human [that] you focus on the last lap. It is true that he was very lucky in the last lap, but you should see the whole season.

"Was he lucky at Silverstone? Was he lucky in Azerbaijan? Was he lucky in Budapest? He was not! So at the end of the day, all season and of course the last race, [with the] same number of points, you could have another expectation but, to quote Max, 'It is what it is'."

Asked to compare Verstappen to similar champion personalities that have come before, such as Michael Schumacher, Todt said it's best to view the Dutch driver as his own man.

"Each champion at this level has his own personality," he commented.

"So we'll say Max is Max, Michael is Michael, but clearly, we have to admire and to congratulate. The best team has been Mercedes, and the best driver is Max."