The 1971 Italian Grand Prix remains F1's closest-ever finish, with race winner Peter Gethin beating Ronnie Peterson by 0.01 of a second. To make things even wilder, the top five were separated by just 0.61 of a second. 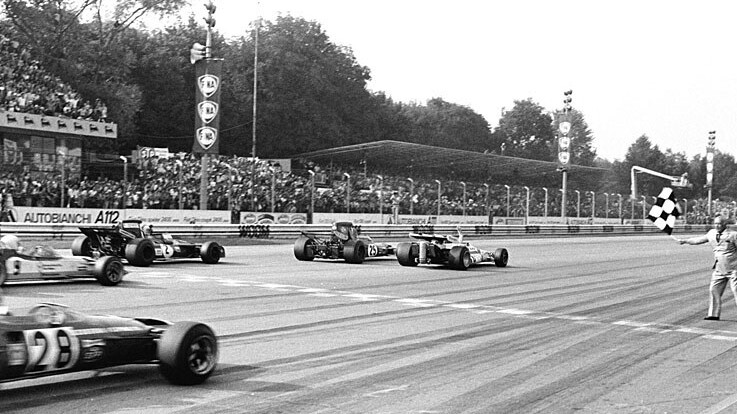 Even in its modern iteration, the Autodromo Nazionale di Monza is all about slipstream. The underlying principle behind slipstreaming is that a car is able to gain an advantage by tailing the car in front due to a reduction in drag.

Back in 1971, the layout of Monza was much the same as today minus the chicanes, Variante and Variante Ascari. This meant that the circuit was all about speed and the cars themselves were able to follow each other in packs.

With the title already decided in favour of Jackie Stewart, the Italian Grand Prix offered a chance for some of the sport's younger drivers to display their talent.

The main protagonists were Peter Gethin of BRM, March's Ronnie Peterson, Francios Cevert of Tyrrell, Mike Hailwood in his Surtees, and Howden Ganley in the second BRM.

Chris Amon, driving a Matra, took pole position with Ferrari's Jacky Ickx right behind him. Jackie Stewart could only manage sixth as he suffered from gearbox issues while Mike Hailwood, who was better known as a motorcycle racer, qualified in 17th, fives places below a driver called Helmut Marko.

The star at the start of the race was Ferrari's Clay Regazzoni who vaulted his car from eighth to first, though it must be noted that the legality of it is something that is open to debate. He would eventually lose the lead to Peterson by the start of lap 4.

Peterson would stay there for some time, though he was forced to battle with several drivers including Stewart, Ickx, Regazzoni, Cevert and Amon. There was a jostling of position through the entirety of the race with no one really able to assert their dominance.

As the race progressed, mechanical issues began to afflict several of the competitors. Stewart was forced to retire after his engine blew and local fans were left disappointed when both Ferraris retired in quick succession.

This opened the door for Hailwood, who up until that point had never practiced the art of slipstreaming. With the race nearing its end Amon took hold of the lead with just 10 laps to go, but unfortunately for him his visor came off after removing a tear-off strip. This, coupled with fuel issues, meant he was out of contention and saw him fall to sixth.

This left the aforementioned cars of Gethin, Peterson, Cevert, Hailwood and Ganley to battle it out for the lead. The five cars would throw everything except the kitchen sink at each other with Gethin ultimately prevailing, pipping Peterson by 0.01 of a second. Cevert would finish third with Hailwood and Ganley completing the top five, a mere 0.61 of a second between first and fifth.

The 1971 Italian Grand Prix might be known for having the closest finish in the history of Formula 1 but the race provided the fans with some truly spectacular racing.

There were a total of 25 lead changes between eight drivers, while it also became the fastest race of all time with an average speed of 150.7 mph at that time. Perhaps most noteworthy of all, there were only eight laps where the order did not change from the previous lap.