The challenges F1 faces in developing drivers as activists

As the We Race As One campaign progresses into its second year, F1 is set to consult with the drivers about how they wish to show their support for key issues. But if the hope is for more drivers to follow Lewis Hamilton’s lead into activism, this could present many challenges. 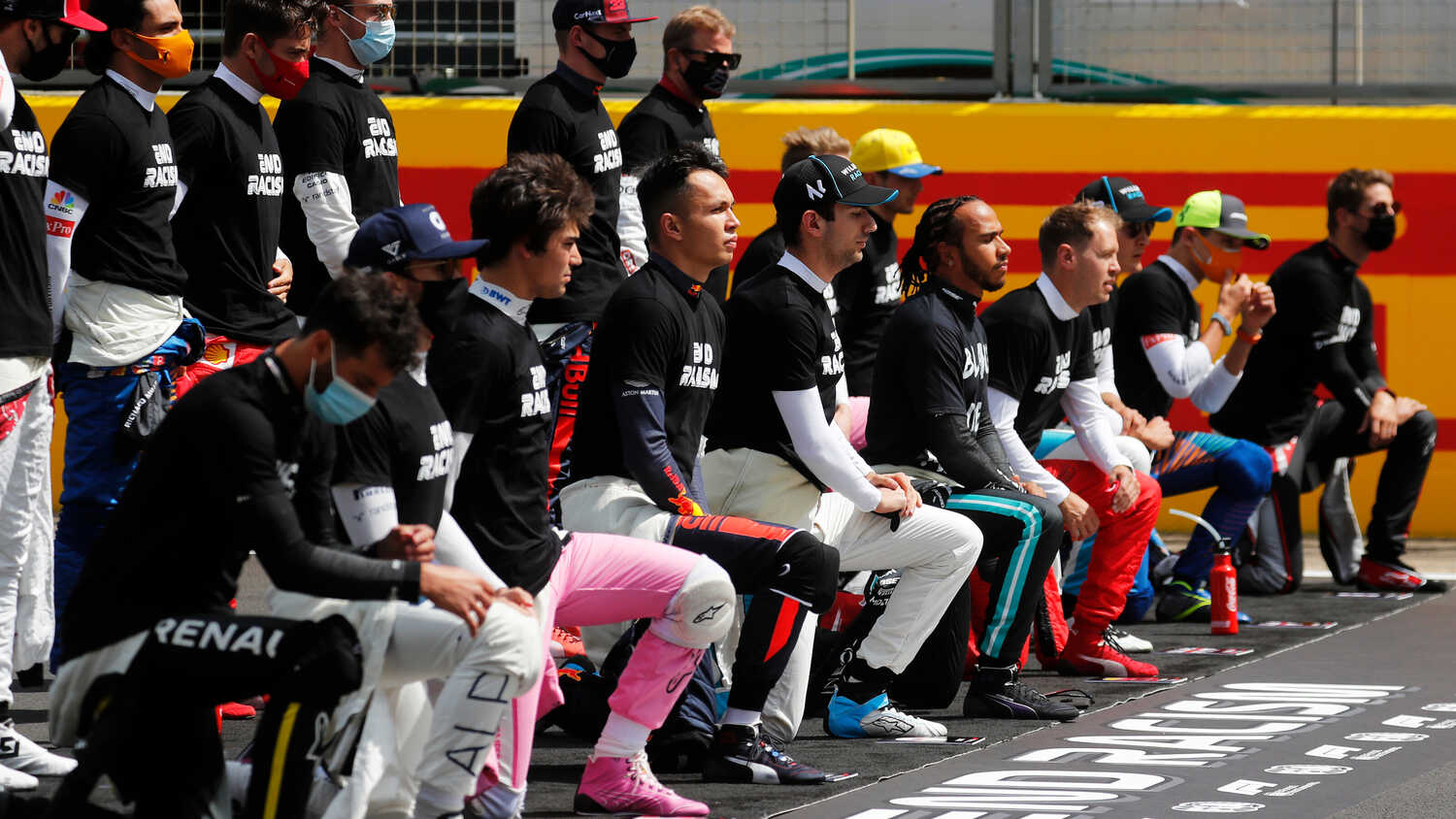 F1 has been setting out plans for the next stages of the We Race As One campaign, an initiative established in 2020 which primarily focused on issues of racial injustice and the impact of the coronavirus pandemic. As part of this, the drivers showed their support in a pre-race gathering on the grid, where they wore anti-racism T-shirts and many took a knee.

In 2021, the We Race As One movement will expand to focus on the key areas of sustainability, diversity and inclusion, and community, and the drivers will be consulted on how they wish to show their support ahead of races. Meanwhile new F1 CEO Stefano Domenicali has spoken of his plans to have a meeting with the drivers at the season opener in Bahrain to discuss their behaviour and their responsibilities as role models.

All of this hints at the prospect of drivers taking on a more prominent role in using their voice to fight for various causes, just as Lewis Hamilton most notably did with his activism work in 2020. But if the desire is for them to make the step from role model to activist, the sport faces several challenges in achieving this.

A good place to start is to look at the work of Hamilton. Whilst he was particularly known for his anti-racism activism last year following the death of George Floyd, the Briton has long been fighting to raise awareness of environmental issues. This perhaps ties in well with F1’s own desire to work on sustainability, and will undoubtedly be a focus for both parties in 2021. But two issues have already arisen from Hamilton’s attempts to speak out and take action.

Firstly, ultimately anybody involved in Formula 1 who raises concerns about the environment is usually hit with accusations of hypocrisy. A look at any of Hamilton’s social media posts on the topic soon confirm this; on a recent post about climate change, comments from followers included “You beg this all the time but yet race f1” and “Well begin by yourself by quitting normal F1 racing and sign in for Formula-E. #hypocrite”. Even though Hamilton has taken action to address his carbon footprint - including selling his private jet and establishing a team to compete in Extreme E, the upcoming series that aims to highlight the effects of climate change - it appears that it will never be enough for some critics.

Secondly, a criticism often levelled at environmental activism in general is the notion of privilege; that those campaigning for these issues are in a position of privilege that gives them the financial means to adopt eco-friendly measures in their lives which many people could not afford to do. As one of the world’s wealthiest athletes, Hamilton is obviously open to this sort of reproval. 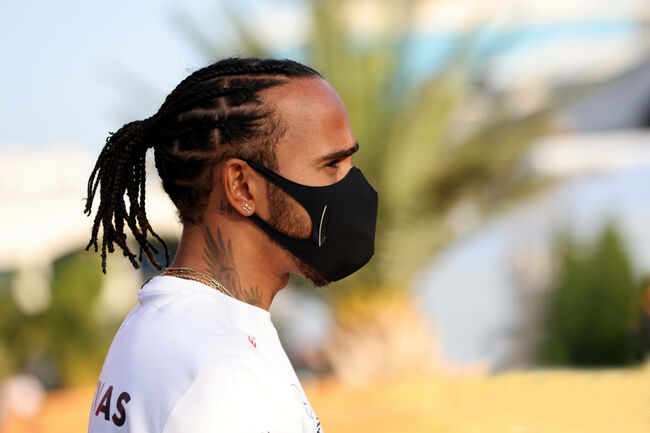 And for Formula 1, the privilege barrier could have an effect in other ways. Whilst many sports are accessible and affordable at a grassroots level, motorsport is less so in terms of the finances required. To even get started in karting can prove to be a very expensive venture, meaning that in many cases only those who either have the funds themselves or are able to obtain sponsorship can make their way through the ranks. To reach the top level, then, arguably requires a level of financial privilege alongside talent, and this could heighten the impression that F1 drivers are a very privileged group.

Those in a position of privilege may - perhaps through no fault of their own - find it more challenging to prove to groups affected by issues of injustice and such that they truly understand the effects of what is happening. This is an unfair criticism of F1 drivers in some ways; many do not live the stereotypical "glamorous lifestyle" that some could associate with their level of fame and income, not to mention the fact that several drivers have sacrificed a great deal to get to where they are.

Yet the image of privilege is not helped by the prevalence of so-called "pay drivers". The fact that these drivers come from a position of wealth leaves them open to a lot of criticism; Lance Stroll, for example, is often subject to accusations of nepotism given that his businessman father Lawrence Stroll owns the team he races for. This criticism might not be entirely fair but it doesn’t help with making F1 appear accessible and not just for the elite. It is hard to imagine any "pay driver" being accepted as an activist by many fans given their background. The backlash would surely be enough to put drivers off even trying to publicly fight for a given cause.

There are other challenges at play alongside the image of privilege. Formula 1 is a global sport, which takes place in countries with a wide range of political stances and features drivers of many nationalities with their own cultural norms. This issue became a talking point when some drivers chose to stand rather than kneel during the anti-racism pre-race protests in 2020; some of those who opted not to take the knee seemed wary of appearing to be affiliated with any political movement or to disrespect certain cultures.

Carlos Sainz explained of his decision to stand: “I am a free man and I want to express myself in a way that I think is convenient to my culture and my principles. I’m going to keep it that way and I expect you guys and everyone in the paddock to respect that as I’m sure you will.”

But those who decided not to take the knee were often met with backlash on social media. Charles Leclerc - one of the seven drivers to stand during the pre-race moment - was particularly upset by this. 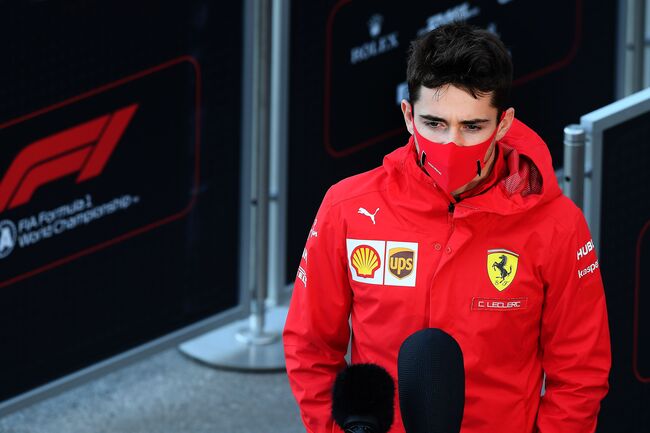 “It is very sad to see how some people manipulate my words to make headlines making me sound like a racist,” the Ferrari driver wrote on Twitter. “I am not racist and I absolutely hate racism. Racism is disgusting. Stop putting me in the same group as these disgusting people that are discriminating others because of their skin colour, religion or gender. I'm not part of them and I never will. I've always been respectful to everyone and that should be the standard in today's world.

“And to whoever is using my image to promote their wrong ideas, please stop. I'm not into politics and I don't want to be involved in that.”

Getting involved in activist or political matters is clearly a sensitive issue and one that the drivers can easily receive backlash for, whether it is for being very vocal (Hamilton, for example) and for seemingly not engaging in the way expected (the drivers who chose to stand). The ease with which this criticism can now be shared over social media is perhaps off-putting to many drivers in pursuing any activism.

There was a feeling here that some drivers did not feel it was their place to get involved in such issues; that their role is solely as an athlete. This is a challenge for Formula 1 if it is to include the drivers in achieving the goals of the We Race As One movement, because ultimately many of these issues do not directly affect the drivers themselves, yet require them to speak out in a way that people can relate to.

Activism can be more powerful when it comes from lived experience - Hamilton showed this in sharing his own experiences of racial injustice, highlighting that he understood the cause he was trying to raise awareness of. This is especially powerful given Hamilton’s presence at the forefront of the sport, with visibility key in promoting inclusivity and diversity. The drivers are the most visible aspect of Formula 1 and so in some ways they are the most influential. Yet some of the issues that We Race As One is hoping to work on - such as increasing gender inclusivity and ethnic diversity in F1, for example - cannot be represented by the current drivers in terms of lived experience, given that they are all male and the majority are white.

What is required of the drivers, then, is to be allies for these causes. If the visibility is not there yet, then their words of support would act as a powerful message in promoting diversity and inclusivity as well as the other issues that F1 is hoping to address. But again this requires drivers to be willing to speak out, and this is clearly something that - as Leclerc’s desire to not get into "politics" shows - some are perhaps uncomfortable with.

The relationship between sport and politics is a controversial one. Ralf Schumacher has voiced his opinion that the two should not be mixed. “I firmly believe that sport and politics should not be combined,” the former racer said in a conversation with AvD Motorsport Magazin on the German Sport1channel last year. “If they do, then it's certainly not up to the driver to say anything about that.”

Meanwhile FIA president Jean Todt explained following the introduction of the drivers’ anti-racism gesture in 2020 that he would not force drivers to pursue activism. “I feel it would be completely inappropriate to push people to do something they don't feel.”

But for those drivers who do want to follow Hamilton’s lead into using their voice more, how can these many challenges be overcome? In terms of addressing the issues of privilege and accessibility, there were ways in which this started to shift in 2020. Despite social media sometimes being a negative force in terms of backlash, it also proved to be an excellent means for drivers to show a new side of themselves. 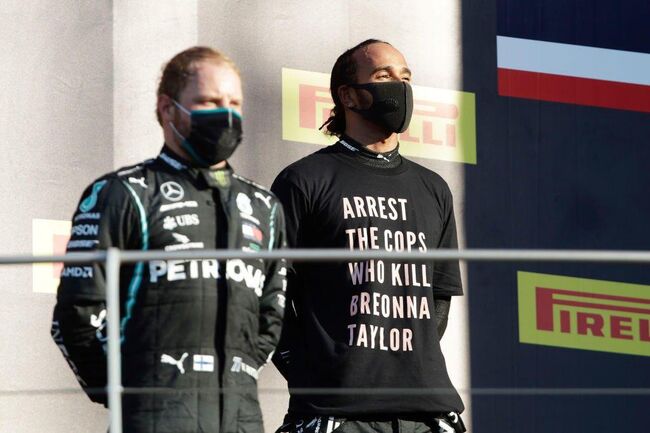 When the season was delayed due to the coronavirus pandemic, many drivers took to racing virtually together. This proved to be an inspired move; fans were delighted at having the opportunity to watch these supposedly very privileged athletes racing on computer games at home, showing that they are ultimately just human beings.

Seeing the drivers in this natural and unguarded environment showed them as relatable people who like to joke around and actually live quite normal lives in some respects; take Leclerc, who famously had to pause one of his Twitch sessions to let his girlfriend into their flat after accidentally locking her out. Building this kind of rapport with fans of the sport will definitely not have hurt in making the drivers seem more approachable and ultimately more understanding of what is going on in the world.

Meanwhile Hamilton’s activism has showed that, despite the criticisms and challenges of engaging in this type of work as a privileged sportsperson, it can still be done and can have a powerful impact when enacted with empathy and thought, and when actions and not just words are used. It will be fascinating to see how the drivers choose to work with We Race As One in 2021, and who - if any - might follow Hamilton’s path.