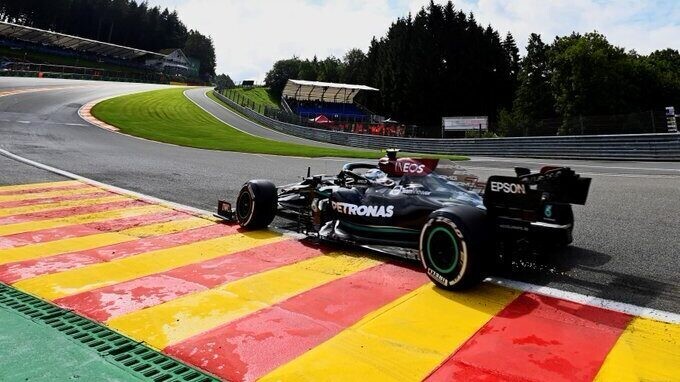 The team noted a substantial difference in lap time between modes due to the reliance on power and straight-line speed at Spa-Francorchamps.

Valtteri Bottas and Lewis Hamilton were both within one-tenth of Max Verstappen in the afternoon session despite some balance issues for the British driver throughout the day.

"We've had a pretty clean day overall," said Shovlin. "It's often tricky on Friday here with the long lap and unpredictable weather but we've made good use of the sessions and have ended up with a reasonable balance.

"It's hard to know quite where we stand; the circuit is very power sensitive so going up and down on modes can give big swings in lap time but the car seems to be working as it should and it looks like we're there or thereabouts on pace."

Mercedes tested low and medium downforce rear wings with Hamilton and Bottas with the Finn feeling better about his W12 in the cool conditions at Spa. Shovlin expects the team to make progress with Hamilton's pace overnight, ready Saturday's final practice session and qualifying.

"There's a bit more to find on the balance and Lewis had some vibrations on the long run that won't have helped," continued Shovlin. "But hopefully we can make some further progress with the car overnight.

"We're expecting more of the same from the weather over the rest of the weekend, it's quite hard to read more than 30 minutes into the future so planning qualifying and the race could be tricky but it's not unusual to be in that position here."