Mercedes' James Allison has praised Valtteri Bottas for what he called a "majestic" performance in Turkey. 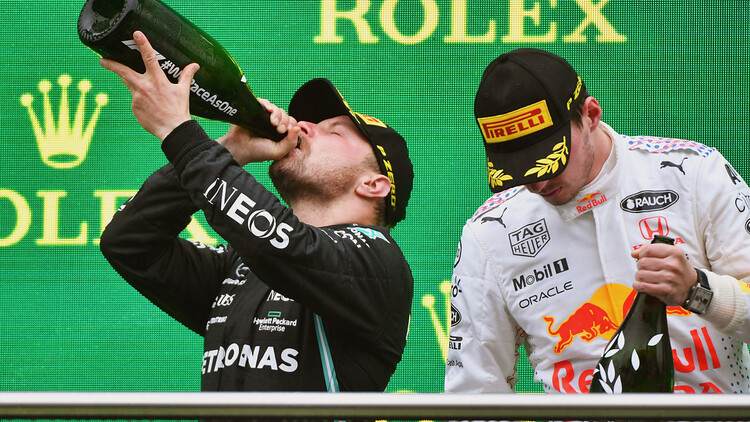 Following his dominant Turkish Grand Prix victory, Mercedes have taken the opportunity to praise Valtteri Bottas as he closes in on his final races with the team.

Bottas will depart Mercedes for Alfa Romeo at the end of this season, and rose to the occasion when needed last weekend at Istanbul Park.

With teammate Lewis Hamilton's challenge for the win compromised by an engine change grid penalty, Bottas was authoritative out front and ensured that Red Bull did not capitalise to the maximum with a 1-2 finish.

Inheriting pole position from Hamilton, Bottas went unchallenged throughout the race and took his first victory in more than a season.

Speaking in the team's Turkish Grand Prix debrief, James Allison, Chief Technical Officer at Mercedes, was asked about whether the race could have been "less perfect" for the Finn.

"I think I prefer to ask that question the other way around: Could it have been more perfect? The answer is no," Allison said.

"He didn't put a foot wrong and it was a majestic performance, commanding from the front and with great skill in very difficult conditions. Skill that required him not to be too greedy at any point in the race.

"However, he also knew that the margin between really competitive performance in the car and tyre disaster is very fine, and a little bit of [a] heavy right foot, a bit of clumsiness here or there, would have seen the tyre damaged to a point where the inherent advantage of the car would all have washed away to nothing."

Turkey in 2020 was an unmitigated disaster for Bottas, as he spun off several times in similarly tricky conditions, making his 2021 performance all the more remarkable.

"He drove a very, very controlled race, well within himself, just eking out a small amount over Verstappen behind to protect himself, allowing that gap to grow to first two, then three, then four seconds as the race progressed," he said.

"[It was a] very, very commanding, mature performance and especially after the pit-stop.

"A pit-stop that we did to mirror and match what Max Verstappen had done a lap earlier, and then with Valtteri on fresh tyres making sure that he drove very gently on that fresh rubber, avoiding the graining so that he could then be completely protected and strong in the closing laps of the race.

"He was full of beaming smiles afterwards, and with absolute justification. It was a great, great performance and brilliant for the team."