Horner predicts how much time Hamilton has gained with new engine 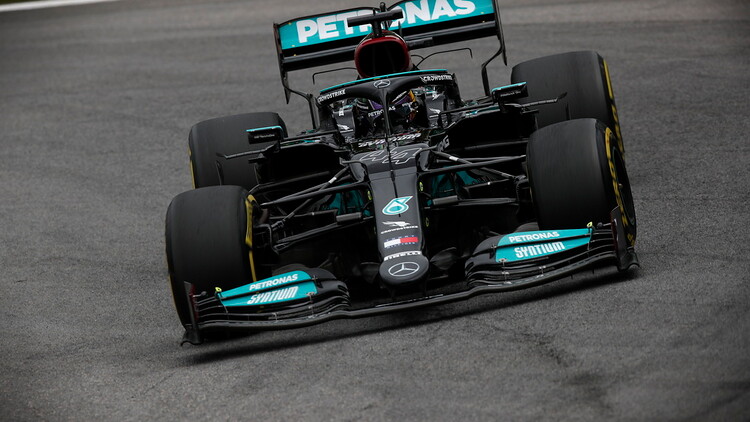 Christian Horner has said that Lewis Hamilton's significant pace advantage over Max Verstappen in Brazil on Friday is evidence of why Mercedes chose to fit his car with a fresh engine for the weekend.

With Hamilton's previous unit showing signs of 'degradation', Mercedes elected to introduce a fresh engine into his pool to get him through the remainder of the season, incurring a five-place grid penalty for Sunday's Grand Prix.

Fitted with that new engine, Hamilton topped first practice and went comfortably fastest in qualifying. He finished four-tenths clear of title rival Verstappen and will start the Sprint Qualifying race from the very front as a result, prior to his penalty being applied.

Speaking after the session, Horner was asked about how much difference he believed the fresh engine was making in terms of lap time for Hamilton.

"It's difficult for us to be able to predict that, but it looks like the relative speed compared to Valtteri [Bottas]... It's a couple of tenths," Horner told Sky Sports. "So that's obviously why they've chosen to take it here.

"But it's a Sprint race we've got tomorrow and then the qualifying coming off the back of that for the Sunday race.

"We saw from this morning that Lewis was very, very strong. That fresh engine is obviously pumping out some horsepower for him.

"I think second was the best that we could hope for, so to be up there on the front row, we're OK with that."

No cause for despair at Red Bull

With Verstappen starting second, the Dutch driver can afford to follow Hamilton around during the Sprint Qualifying race.

But Horner doesn't believe that Verstappen will want to play it safe, as their pace will likely be far more competitive over a longer distance.

"He's a racing driver, so if he can get the lead at the start, he'll go for it," said Horner.

"He only needs to finish second, obviously, to get the pole for the race on Sunday. So let's see. I mean, you've just got to go for the start and then see where you are.

"Let's see [in] the race tomorrow. I think that we've got a good race car. It is going to get hotter through the weekend and the tyres are going to be a factor here.

"The race will be a different set of circumstances. He was talking about the front axle. It will probably be about the rear axle in the race tomorrow, and particularly on Sunday, with the hotter temperature.

"I actually think we've got quite a decent race car here."