The reigning F1 world champion made an uncharacteristic error during the Emilia Romagna Grand Prix, spinning off the track and getting trapped in the gravel as he passed backmarkers. 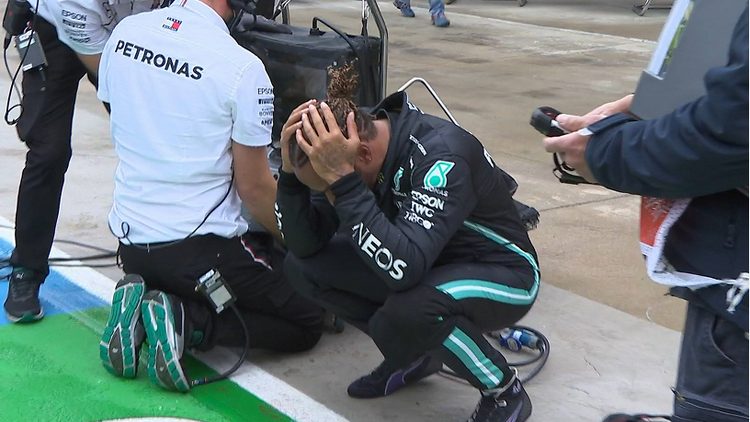 Sir Lewis Hamilton managed to fight his way back up the field to secure second place at the Emilia Romagna Grand Prix after he spun into the gravel while passing backmarkers and tumbled down the order.

The rare mistake from the world champion could have cost him the lead of the drivers’ championship, but he climbed back up the order to finish P2 after the race was red-flagged for a period following a crash between his teammate Valtteri Bottas and the Williams of George Russell.

Hamilton said he feels “grateful” for the lesson and that he was able to work his way back through the pack following the incident, saying in an interview following the race that he didn’t expect to be on the podium when he was facing the barrier in the gravel after the spin.

“I think (I’m) just really grateful for the lesson. I didn’t get away the best at the start, it was very tricky conditions at the start. But we’re only human, so just that bit of a mistake was one to learn from,” he said.

“I’m just grateful I could get going again and get back into the race. It’s not how you fall; it’s how you get up. Really awesome to get back to second. I had a good battle with Lando towards the end. I definitely didn’t know I would be here when I was facing that barrier.”

The Mercedes driver explained the incident was a result of him trying to get past the lapped cars on the damp part of the track, with the car struggling to brake in time as a result.

Yeah, there was only one dry line and I guess I was in a bit too much of a hurry to get by everyone. Coming to the inside, I could see it was wet and I was trying to stop but the thing wouldn’t stop and it sent me off,” he said.

“A bit unfortunate but I’m really, really grateful that we got to get going again and to get some points for the team was really important today.”