It's a "winner takes all" weekend in Abu Dhabi and tensions are high ahead of the season finale, as Lewis Hamilton and Max Verstappen gear up for the biggest title showdown in five years. 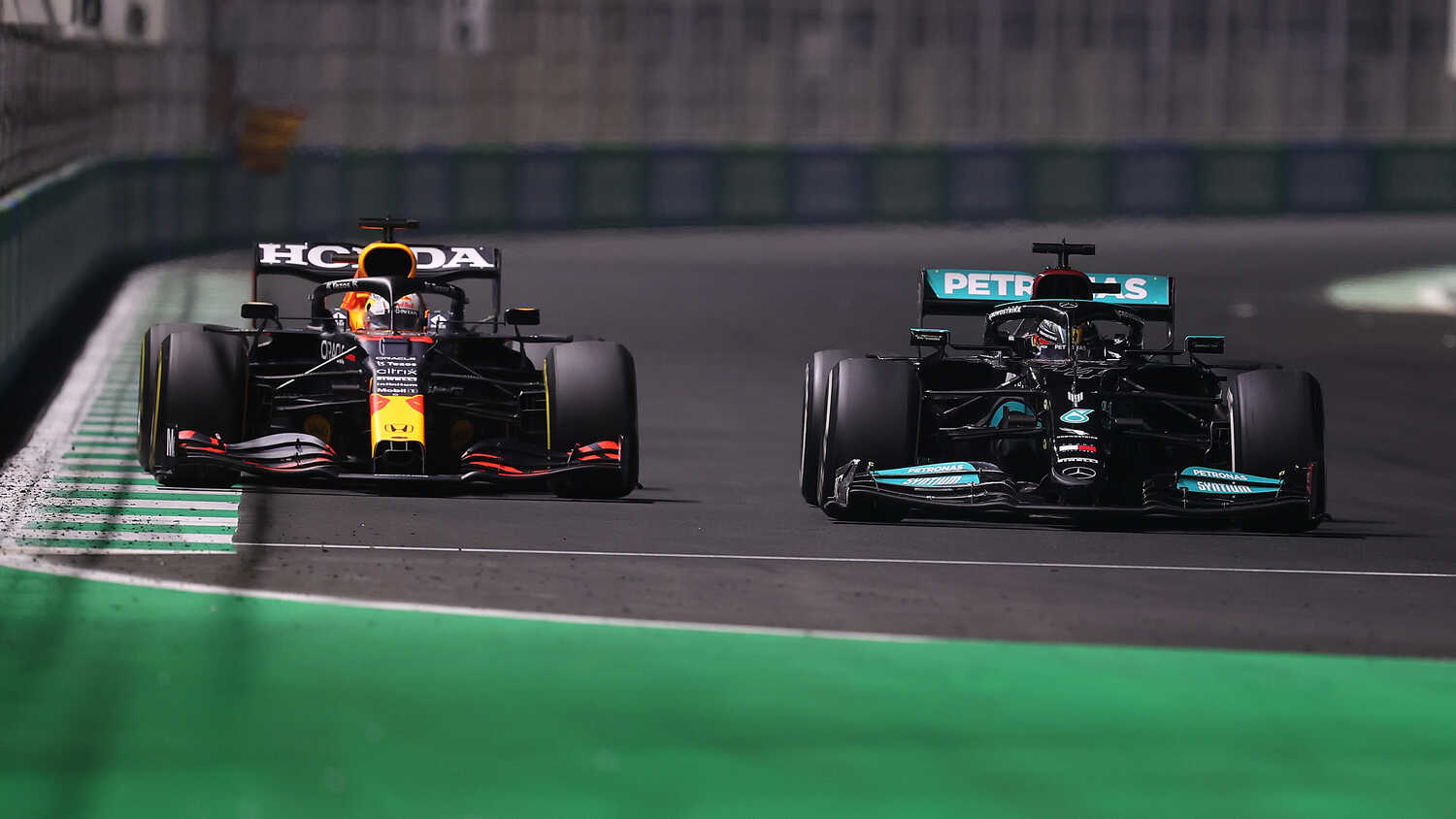 After a season that feels like it only began a few short weeks ago, an intense eight-month-long battle will reach its conclusion this weekend in Abu Dhabi, the final round of the 2021 campaign.

Bahrain, the season-opener, gave us a taster of what was to come as Lewis Hamilton and Max Verstappen went wheel-to-wheel for victory. In what represents a microcosm of the season, it was a race that seemed to be going Verstappen's way, until that moment of controversy regarding track limits at Turn 4.

From there, Verstappen was powerless to stop Hamilton from claiming the win and, heading to Abu Dhabi's Yas Marina Circuit, it's difficult to see how the Red Bull driver can fend off the Mercedes.

Yas Marina is some 14 seconds quicker this year, in terms of lap time, after extensive renovations to remove some of the fiddlier bits of the circuit. Annoyingly for Red Bull, those fiddly bits were to their strengths, as the circuit is now more demanding in terms of outright power and is made up of more medium- to high-speed corners.

It's a track where overtaking is reasonably straightforward, due to long DRS zones on the back straight, although the second braking zone has been made less severe and could actually curtail opportunities as a result.

It's the first time since 2016 that the Formula 1 Championship has come down to the wire, with the 2016 Abu Dhabi Grand Prix the last time the title was fought over at Yas Marina. On that occasion, Hamilton lost out to Mercedes teammate Nico Rosberg, and he'll be keen to banish those memories this weekend. 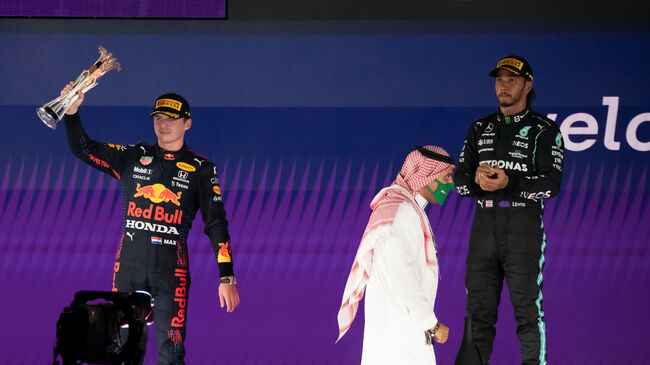 Is it advantage Hamilton?

Verstappen dominated the 2020 Abu Dhabi Grand Prix, although it's something meaningless in terms of the form book. At that point of the season, Hamilton had already won the title and Mercedes weren't focused on a title fight.

Added to that, Hamilton had only just recovered from his bout with COVID-19 and was noticeably off form.

"I wasn't 100 percent that weekend but, still, they [Red Bull] were very, very strong here last year, and they will be strong here this weekend," Hamilton told Sky Sports on Thursday.

Noting the circuit changes for this season, Hamilton pointed out that the corners that have been tweaked have swung the track more towards Mercedes.

"I think the places where we were particularly weak are no longer there, so that's positive," he said.

"But they will still be strong in the new places, so it's really just how we set the car up, our preparation - that's what we are focused on trying to control."

Based on recent races, the Mercedes now appears a more versatile and slightly quicker machine than the Red Bull and, given the open and forgiving nature of the track, even a Verstappen pole position won't make life easy for the Dutch driver.

Incidents and Safety Cars aren't particularly likely at Yas Marina and, given the strength of the Mercedes in a straight line, it's difficult to see how Verstappen can really hold off Hamilton for the race win.

Added to that is the possibility that Hamilton's car might be fitted out with a new engine for this weekend. While not confirmed, rumours have emerged that Mercedes could give him a fresh unit to allow for maximum push. The resulting five-place grid penalty in Brazil proved inconsequential and there's little reason to doubt that it wouldn't be more of the same in Abu Dhabi.

All eyes are going to be on Verstappen and his driving standards this weekend. Due to Verstappen leading the championship by dint of having more victories than Hamilton, a race-ending collision would, theoretically, hand the title to Verstappen.

Such a situation has happened in the past, most famously with Ayrton Senna taking Alain Prost out at the first corner at Suzuka in 1990. However, standards have changed since those days, and the risk of a deliberate collision has been taken into consideration by the FIA.

Ahead of the weekend, Race Director Michael Masi re-emphasised the rules of the International Sporting Code, to highlight that every bit of driving will be held to the highest standards of fairness and that the teams themselves won't be separated from punishment. This is to ensure that Valtteri Bottas and Sergio Perez can't be used as pawns to cause any incidents.

Of course, that's in the event of a deliberate collision, and proving such an event could be difficult. So if that's the road that Verstappen wants to head down, he will have to make sure it looks very accidental.

While it's certainly not a suggestion that Verstappen would want to take such actions, the possibility is there given the sheer number of incidents and near-misses there have already been this season. If it comes down to a last, final moment of desperation to try to clinch the title and keep it out of Hamilton's grasp, it's not unthinkable that Verstappen would do one of his trademark late-braking moves up the inside.

Adding to the tensions between Hamilton and Verstappen is the fact that the Red Bull driver clearly believes that he is racing to different standards than the reigning World Champion. Even after tempers had cooled in the days since the war on-track in Saudi Arabia, Verstappen has reiterated his belief that his penalties have been unfair and that Hamilton is not being scrutinised as closely.

Verstappen will be aiming to simply take pole position and try to storm away at the front, in a bid to ensure the title is won fairly and squarely. That would be the most emphatic answer he can give to stifle the recent critics, and cement his place in the history books. If he wins through a collision, however accidental, he will carry forward a sullied reputation that could take years to shake off. 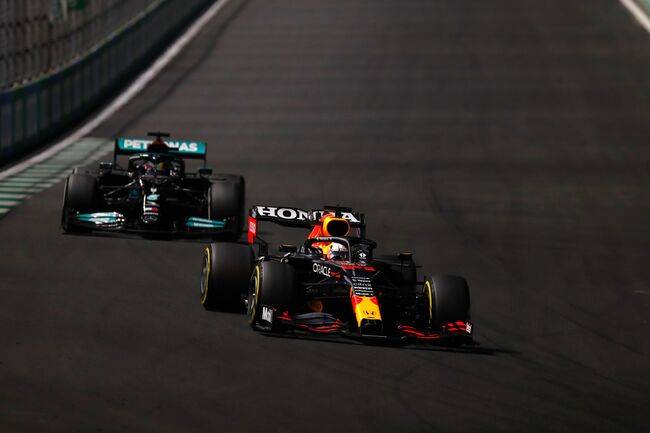 Are both deserving champions?

This weekend's race is being shown on free-to-air TV in the UK, meaning viewers on Channel 4 as well as Sky Sports can tune in to watch what is set to be the most dramatic title showdown - particularly between drivers from rival teams - in several years.

Verstappen's recent driving may be bordering on desperate as he tries to hold off Hamilton's charge, but he has been superlative throughout the season.

Hamilton, too, has been pushed harder than he has been in a long time, and Verstappen's excellence has brought out the best that Hamilton has still to offer. Without each other, either one would have stormed to an uncontested title.

In a year where social media has brought out the very worst of each driver's fanbases, not helped by the fuel poured on by their respective team bosses' rivalry, it's important to remember that the driver that wins has had to perform to the very outer limits of their abilities.

Rather than denigrating the talents of the defeated, celebrate what Formula 1 has produced this year, as this is a title fight that will go down in the history books as a true classic.

The end of an era

It is goodbye to the 13-inch wheels, which have been the mainstay of Formula 1 for more than three decades, with F1 moving to bigger 18-inch versions next year.

Of course, it is also time to say goodbye to Kimi Raikkonen. The legend's moment to depart has finally come, after two decades, with 2021 being the first noticeable decline in his racing abilities. At 42, it's a well-earned retirement that awaits him, and Formula 1 fans will long remember his tremendous speed, unwavering bravery on-track, and those exciting early days where he was the fastest man in the world. Everyone at RacingNews365.com wishes him a long and happy retirement at home with Minttu and his young family.

Separately, for our Dutch readers, it's also time to say goodbye to Olav Mol, at least temporarily. After more than 30 years, the switch from Ziggo to Viaplay means that the veteran broadcaster is sidelined, to the disappointment of a huge Dutch fanbase. Wouldn't it be a fitting send-off for him if Verstappen could clinch the title in his final race?

One way to watch the Abu Dhabi Grand Prix in certain countries is through F1 TV, F1's own digital streaming platform that helps you get inside the pit lane while accessing real-time statistics and timing, along with historical content.