Five times the Halo has saved a driver from serious injury

Since its introduction in 2018, the Halo cockpit protection system has already prevented serious injury in several crashes. Here are five of those occasions, when drivers walked away after the Halo played a crucial role in protecting them. 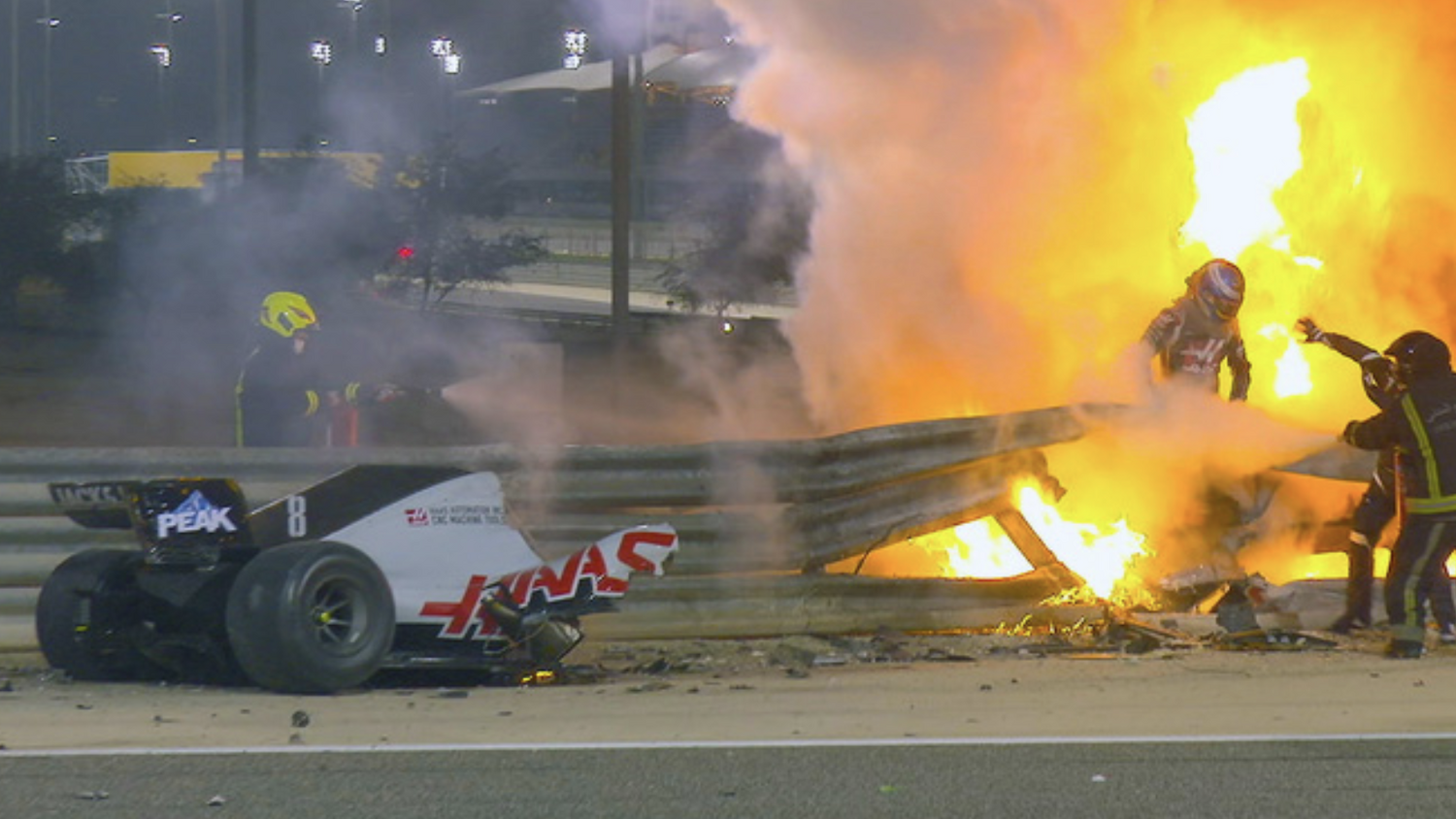 The Halo cockpit protection system was introduced as a mandatory component on Formula 1 cars at the start of the 2018 season, following years of research and development by the FIA and teams to find a solution for increased cockpit safety.

This push was brought about following the identification of the driver's head being an area of particular vulnerability, after the tragic deaths of Henry Surtees in Formula 2 at Brands Hatch in 2009, and the serious head injuries suffered by Felipe Massa in a qualifying crash at the Hungaroring in 2009, when an errant car spring punched a hole in his helmet.

Jules Bianchi's ultimately fatal accident at Suzuka in 2014 hastened the push, while international motorsport bodies also increased their efforts following the death of Justin Wilson in an IndyCar race at Pocono in 2015.

Formula 1 and the FIA developed the 'Halo' system, while the IndyCar series turned towards the 'Aeroscreen', which has been developed by Red Bull Technologies.

The FIA mandated the Halo during 2017 for introduction in 2018, initially meeting with strong resistance from fans and drivers, who felt that the lack of aesthetic appeal and the move away from an open cockpit ethos was a step in the wrong direction.

However, that resistance has vanished in the years since, as the Halo has unquestionably already justified its introduction by saving several drivers from serious injury and, in some cases, certain death.

Here are five such occasions, in which the Halo has played a crucial role in saving a driver from serious injury.

The first occasion in which the Halo stepped up to the plate actually happened very quickly after it was introduced. With Formula 2 mandating the Halo at the same time as Formula 1, the junior series arrived in Barcelona for Round 3 of the 2018 Championship.

Japanese drivers Nirei Fukuzumi and Tadasuke Makino made contact at Turn 4, with Fukuzumi's car being pitched into the air and landing on top of Makino's. Makino's Halo bore the brunt of the weight of Fukuzumi's car as the rear-left wheel came to rest directly on top of it.

Makino explained afterwards that the incident had made him change his mind, having originally been a skeptic.

"The first time I tested this car I didn't think the Halo was good, because it's difficult to see anything, but today the Halo helped me," he told Autosport.

"It's really important. I understand how the Halo works now. I don't know what happened, but without the Halo I think the tyre would have hit my helmet."

Racing at Monza in the Formula 3 Championship in 2019, Australian youngster Alex Peroni hit a sausage kerb on the exit of the Parabolica.

His car was thrown skyward, in what looked like a crash from a computer game, as he flew through the air. His car landed upside down on the tyre barriers, bouncing upward before coming to rest right-side up.

Peroni was able to get out of the car after the terrifying crash and later withdrew from the championship to return home to Australia with a broken vertebra.

The picture below shows the extend of the damage to Peroni's Halo on his Campos Racing car. 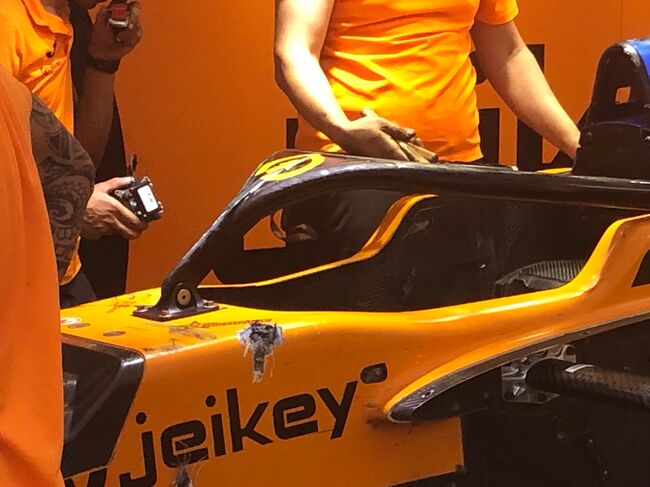 Charles Leclerc was contesting his rookie F1 season with Alfa Romeo Sauber in 2018 when he was involved in a huge accident at Spa-Francorchamps.

Braking for La Source, Leclerc's car was struck by Fernando Alonso's flying McLaren, which had been hit by Nico Hulkenberg's Renault.

As the McLaren flew over the top of Leclerc, Alonso's front-right wheel impacted with Leclerc's Halo as the two cars crunched together.

"Definitely, the Halo probably helped today," Leclerc told the media when asked about the crash.

"It's a good proof," added Alonso. "We didn't need any proof but it's a good thing." 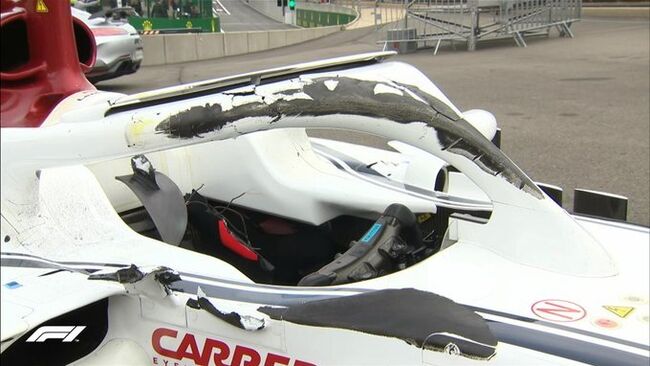 While the collision between Lewis Hamilton and Max Verstappen in the 2021 Italian Grand Prix appeared innocuous at first, with the incident looking more silly than serious, it wasn't until it got analysed in greater detail that the important role the Halo played was revealed.

The initial contact at the apex of Turn 2 at Monza pitched Verstappen's Red Bull into the air and across the top of Hamilton's Mercedes, with Verstappen's car landing on top of his rival's roll hoop and Halo.

Having already protected Hamilton's head, the Halo saved Hamilton from serious head injuries, with the rear-right wheel of Verstappen's car rotating across the top of the Halo and Hamilton's helmet.

With Hamilton's helmet being pushed down by the wheel, there's no doubt that the Halo prevented a much worse outcome.

"The Halo definitely saved Lewis' life today," Mercedes' team boss Toto Wolff told media, including RacingNews365.com, afterwards. "It would have been a horrible accident that I don't want to even think about if we wouldn't have had the Halo." 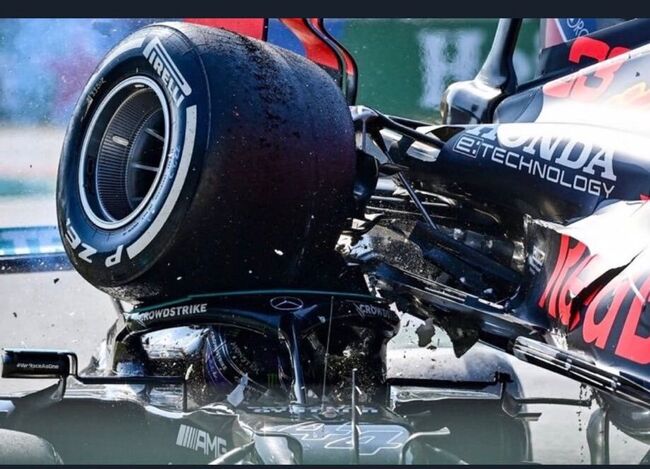 Romain Grosjean's fiery crash at the 2020 Bahrain Grand Prix became one of the most dramatic moments in sporting history last year, as the French driver walked away with relatively minor injuries from an incident that, unquestionably, would have resulted in his death just three years previously.

Grosjean was coming out of Turn 2 on Lap 1 when he misjudged a move across the track in front of AlphaTauri's Daniil Kvyat, spinning his Haas around and sending the car head-on into the barriers at a perpendicular angle.

The impact was ferocious, to the point where Grosjean's car split in two as the survival cell punched through the barrier with Grosjean still inside. Experiencing a 67G impact, Grosjean came to rest on the opposite side of the barrier as the split fuel cell ignited. Fortunately, he was able to get out of the cockpit, vault the barriers in the flames, and get away from the crash before the adrenaline of the moment caught up with him.

Extensive analysis after the crash showed that the Halo acted to pierce and slice the metal barriers in front of Grosjean's head, peeling them aside and allowing his helmet to pass through without injury. Had the Halo not been there, Grosjean would likely have suffered fatal injuries.

Grosjean has spoken at length about the crash, dubbing himself a "phoenix" as he enters a part of his life he acknowledges would not have been possible without the Halo.

Initially a skeptic, Grosjean said: "I wasn't for the Halo some years ago but I think it's the greatest thing that we brought to Formula 1 and without it I wouldn't be able to speak to you today."

McLaren: The summer break was good for Ricciardo
19 September 2021
0 comments

Schumacher: I thought Vettel was going to retire
18 September 2021
0 comments

Wolff: Strict and clear clauses in place for Albon at Williams
18 September 2021
0 comments

Horner: FIA could have given Hamilton and Verstappen the same penalty
17 September 2021
0 comments

Video
Video: Ricciardo gets emotional as he places trophy next to Senna's
17 September 2021
0 comments