Bmw i Andretti's Jake Dennis has put in a peerless performance in Valencia, leading the second E-Prix from start to finish. 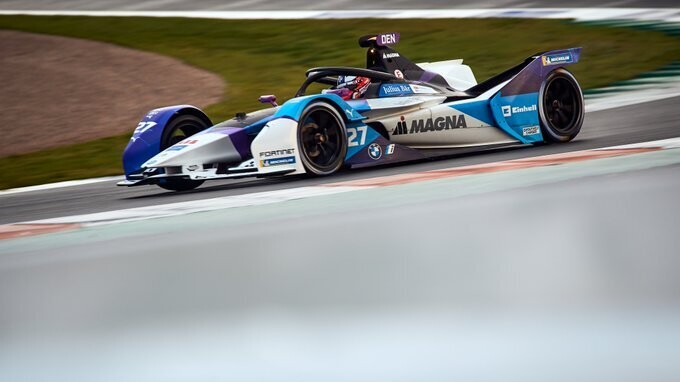 Bmw i Andretti's Jake Dennis has won the second Valencia E-Prix of the weekend, having started from pole position.

He won the race ahead of Venturi's Norman Nato, but a five second time penalty for Nato meant he was shuffled down to fifth at the chequered flag.

Porsche's Andre Lotterer finished in third on track, promoted to second as a result of the penalty, with Alex Lynn finishing third for Mahindra.

With energy management at a premium on a circuit with little opportunity for re-generation, Dennis appeared to be trying to entice the cars behind to overtake early in the race in a bid to be able to slipstream, an invitation the other cars refused.

Dennis survived the first round of Attack Mode activations, having opened up a big enough gap in the opening laps to be able to run wide, activate Attack Mode, and still retain his lead.

Lynn briefly lost out to Nato as they went through their Attack Mode sequences, but Lynn was able to sweep back past Nato before his extra energy was deactivated.

Dennis appeared to be managing his energy very carefully, due to being the lead car, holding up a long train of drivers with no significant gaps on track.

Second-placed Lynn fell down to fifth place with just over fifteen minutes remaining, as he was tagged at the chicane by Nato. Pushed off into the gravel, Lynn had to pick up the pieces as Dennis sprinted away to over a second clear of Nato again.

Nato was given a five second time penalty for causing the collision with Lynn.

With fifteen minutes to go, Stoffel Vandoorne took himself out of the race. Racing against Buemi, the Belgian turned in too early at the chicane and hit the tyre barrier. The Mercedes was terminally damaged as a result.

Click here for the results from Round 6 - Valencia E-Prix.