Race strategies for the Spanish Grand Prix: Why the start is pivotal for Verstappen

With the fourth round of the 2021 Formula 1 championship set to take place at the notoriously difficult to overtake on Circuit de Barcelona Catalunya, the all-important race start could be where the race is won and lost. 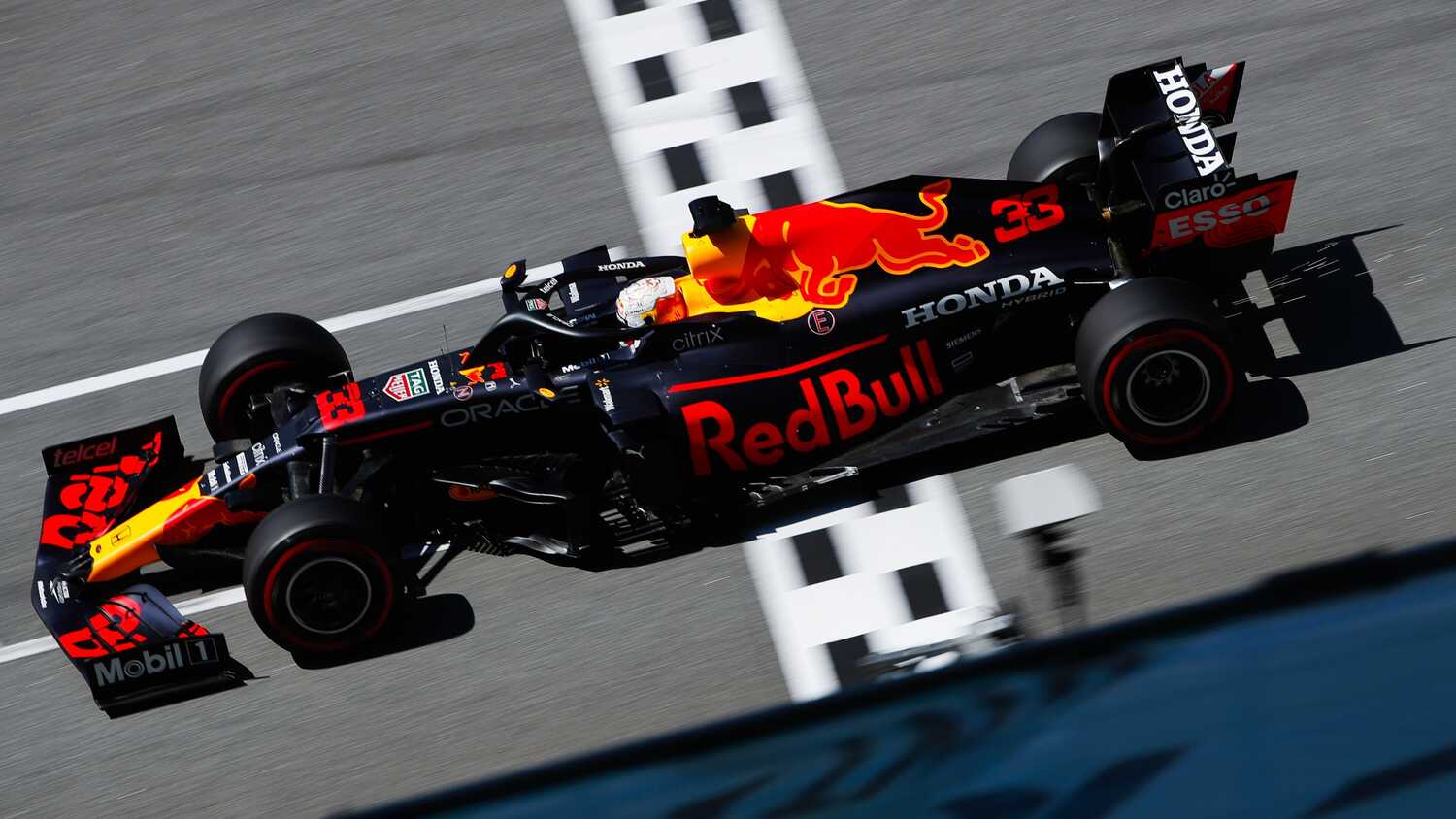 With Lewis Hamilton securing his 100th pole in Formula 1 the Mercedes man has put himself in the driving seat for the 2021 Spanish Grand Prix. He will be joined by Red Bull's Max Verstappen and the pair will fancy their chances as since the race joined the F1 calendar in 1991, there have only been three winners who have started outside the first two grid positions with Verstappen himself being one of them in 2016.

The fact that the first ten drivers are all starting on the soft compound tyre means the start will prove to be crucial as a pitstop gaffe might be a driver's best chance of leapfrogging another car given how difficult it is for the drivers to follow each other around Barcelona.

A two stop race strategy is expected to be excuted by most of the drivers given the nature of the circuit with the high and medium turns across all three sectors testing Pirelli's tyres to its limits. However with cooler weather conditions predicted for today, the possibility of running a one stopper does seem feasible.

The Italian tyre manufacuter is confident a two stop strategy might be the best approach to the race with tyre management set to play a crucial role given the strain put on a car's left hand tyres. Further the tyre suppliers have also highlighted that the time lost in the pitlane is significantly lower than say at a track like Portimao.

"The 66-lap Spanish Grand Prix is likely to be a two-stopper," Pirelli said in a press statement.

"This is down to the relatively high levels of tyre wear and degradation seen at the Barcelona circuit, with its abrasive asphalt and high-energy corners. Another reason is the fact that not so much time is lost in the pits, which makes a two-stopper much more viable.

"Overtaking can be tricky at Barcelona – one of the reasons why qualifying is so important – so race strategy has to prioritise track position above all."

Mario Isola the company's head of car racing also beleives a two stopper will the best way to go, especially considering all ten drivers at the front will start on the soft compound tyre.

"Unlike Portugal, we didn't see widespread use of the medium tyre in Q2, which means that the top 10 will all start on the soft tyre tomorrow," Isola said.

"This indicates that the soft will form a key part of the race plan, with many drivers set to run a 'sprint' strategy that could take in two stints on the soft compound. That's not to say that a one-stopper is impossible here with the right tyre management.

"Only some drivers have two sets of mediums available: either new or used. If the other drivers, without two sets of mediums, want to focus on a two-stop strategy, they have to use one set of medium and two sets of soft. Alternatively they can target a one-stopper, using the hard." 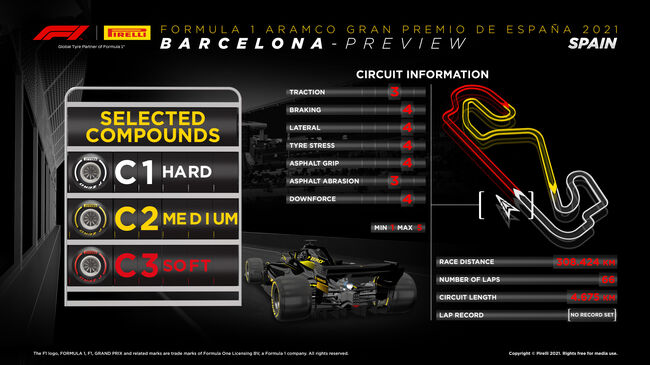 Drivers who could gamble on a one-stop

The most glaring example of a driver gambling on a one-stop strategy is Red Bull's Sergio Perez. The Mexican has a penchant for making his tyres last the duration of a race and the one-time Grand Prix winner might well put his skills to use given his lowly starting position of eighth.

Alpine's Fernando Alonso and McLaren's Lando Norris might also consider implementing an alternate strategy given that they start at the tail end of the top 10 runners.

Aston Martin could be another team willing to gamble on the alternate strategy as the British team and its two drivers Lance Stroll and Sebastian Vettel failed to make it into Q3.

The final wildcard is Antonio Giovinazzi who's Alfa Romeo team have a history of making their drivers stretch the life of their tyres as they look to secure valuable points.

The other issue for the three aforementioned drivers starting in the top 10 is that the 2021 grid has closed up, with the midfield in particular extremely close to one another. With Esteban Ocon, qualifying fifth Alpine have also joined the party meaning the likes of Ferrari and McLaren must look over their shoulders.

This could prove to be a massive hindrance for Perez as the Mexican not only has to get past a McLaren, Alpine and the two Ferraris but will also need to look over his shoulder as he will undoubtedly have Norris and Alonso breathing down his neck.

Battle in the pitlane

One area where Red Bull have thrived in recent years is with their pitstops. The Austrian team have developed a reputation of executing sub-two second stops and they will need to continue their good form in Spain.

With overtaking hard to come by, positions more often than not are exchanged in the pitlane with drivers and teams looking to maximize their pitstops. This means that if Verstappen does fail to get Hamilton off the line his last lifeline could come in the form of the Red Bull pitcrew who lead the field when it comes to giving their drivers an edge. 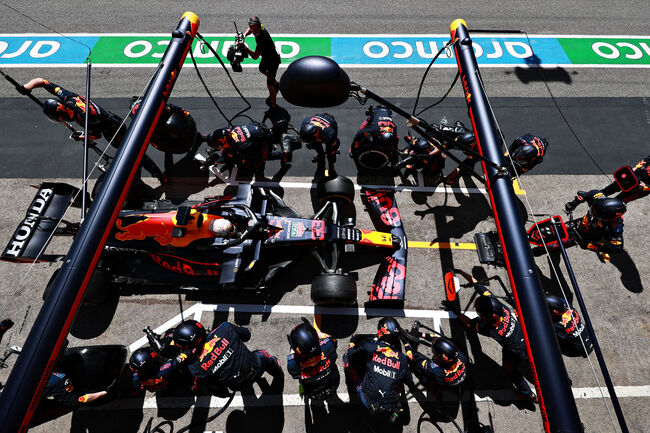 The Finnish driver who will start from third on the grid could be in a position to leapfrog Verstappen given he starts on the cleaner side of the race track. Bottas was disappointed not to have secured pole position yesterday with the driver claiming an error ultimately cost him.

"I was always expecting to have a close qualifying," Bottas said in post-qualifying press conference.

"I’m gutted because in the first run, which was the fastest run for the top three cars at least, in Turn 10, I had a bit of a snap at the apex and lost a bit more than a tenth so, you know, those kind of things, they’re annoying but obviously can happen.

"Overall, in the qualifying session, the pace was good, the speed was there. It was all about the fine details at the end and I couldn’t quite get it right today."

The Mercedes driver has had a difficult start to his 2020 season and will be hoping he can get closer to his teammate on race day.

While an all-out fight for supremacy between Hamilton and Verstappen might delight viewers the probability of it happening remain slim given how important a role a car's aero plays in around Barcelona.

The most probable outcome is that a battle at the start will most likely give way to a game of cat and mouse as both Mercedes and Red Bull will look to execute a flawless pit strategy in order to give their respective drivers the best chance of winning the Grand Prix.