Williams' Drive to Survive snub was a disgrace

The husband of Claire Williams has branded Netflix's glossing over of the team's sale as 'a disgrace'. 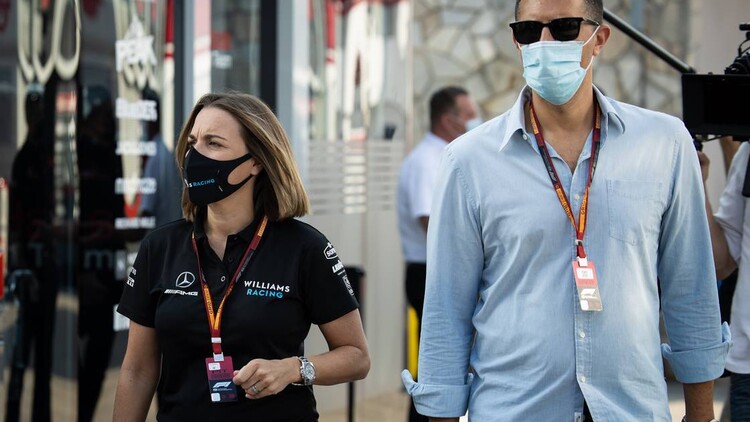 Marc Harris, the husband of former Williams' Deputy Team Principal Claire Williams, has expressed his disappointment with how the storyline of the team's sale was handled by Netflix on the third season of Drive to Survive.

In mid-2020, the Williams family sold their stake in the Formula 1 team after more than forty years on the grid. Sir Frank Williams, along with daughter Claire, left their positions as team boss and deputy, with US investment company Dorilton Capital taking over.

However, despite the team's longevity and hugely successful past, the sale was largely glossed over in the third season of Drive to Survive. This has enraged Claire Williams' husband, who voiced his disgust on Instagram.

"It is impossible to hide the level of frustration and upset I feel around
the latest season of Netflix’s Drive to Survive," Harris said.

"The point of the show is to bring fans closer to the sport, to provide insight into what happens and to tell the stories of the season.

"It is hard to believe that there was a more important story (other than COVID 19) than the sale of one of the most historic, successful and treasured teams the sport has ever seen.

"Over 50 years in the sport, 16 World Championships and the legendary Team Principal Sir Frank Williams and the family leaving a sport that they helped make what it is today and barely a mention. What a disgrace.

"It feels like a total lack of respect to SFW, Claire and the team itself. What an opportunity to tell a story of just how hard the sport is, how tough to survive and the sacrifices that have to be made."

Harris explained that, aside from some sensitive company meetings, full access was given to the Netflix crews throughout the season.

"No, access wasn’t granted to any film crew (other than the Williams own) to the very private moments when Claire had to tell the team that the
family were having to sell and leave the sport they love and breathe
for.

"But an abundance of footage was made available by the team and all
crews had access at all other times. What a shame it wasn’t used..."