Saturday's wet qualifying session at Spa-Francorchamps means the potential for very different strategies in the race, opening up the possibility of a tactical war between Mercedes and Red Bull. 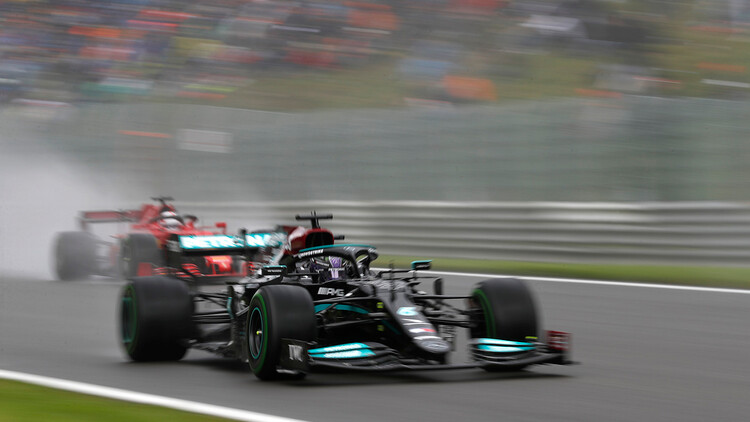 With rain having affected the qualifying session at Spa-Francorchamps on Saturday, and the possibility of a wet race on Sunday, the 44-lap Belgian Grand Prix looks set to be an unpredictable and complicated affair.

Spa is rarely easy, given the possibility of half the track being dry and the other half wet as rain lingers between the trees, and there's a high probability of a Safety Car also playing a role in the race.

The weather forecast suggests a damp race, meaning drivers are likely to, at least, start the race on the Intermediate tyre, before making their individual calls to swap to a dry tyre compound of their choice. Crucially, pole-sitter Max Verstappen still has a remaining new set of Intermediates left for use in the race.

Williams' George Russell or, more pertinently, Mercedes' Lewis Hamilton, do not have a new set of Intermediates remaining and will have to, therefore, use a set that has been on track already.

The crossover point to swap from the Intermediate to a dry tyre will be critical to the race, with each driver having to make that individual call.

Even if the race does take place in dry conditions, there's still the opportunity for strategic gambling. A wet qualifying means that drivers can start the race on a compound of their own choosing, meaning a choice of the Soft, Medium or, less likely towards the front, the Hard.

Last year's winning strategy was starting on the Medium, before swapping to the Hard, on a one-stop strategy. A dry race this year is likely to be similar.

Pirelli believe cooler track conditions, as forecast for Sunday, may push drivers towards a two-stop strategy with teams likely to utilise the Soft tyre for two stints.

Starting on the Medium offers maximum flexibility and covers off the possibility of a Safety Car.

"This was an extremely tricky qualifying where it was very hard to predict the weather from one minute to the next, forcing the teams to think on their feet," Pirelli's Mario Isola said after qualifying.

"Similar conditions are expected for [Sunday], so that particular challenge is set to continue. The Intermediate tyre, which was used for the bulk of [Saturday's] running, showed itself to be capable of handling a wide variety of wet and drying conditions.

"[Sunday's] strategy – where we don't even know yet which type of tyres the drivers will be starting the race on – is going to be mainly about adapting to changing circumstances, as we saw throughout [Saturday]." 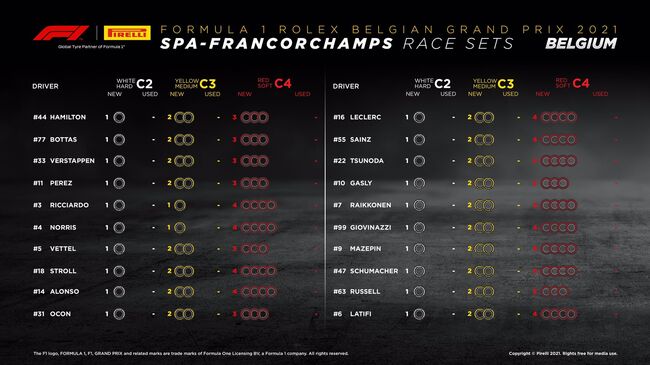