Mercedes' Lewis Hamilton has pointed the finger at Max Verstappen for being to blame for their clash that resulted in both drivers retiring from the Italian Grand Prix. 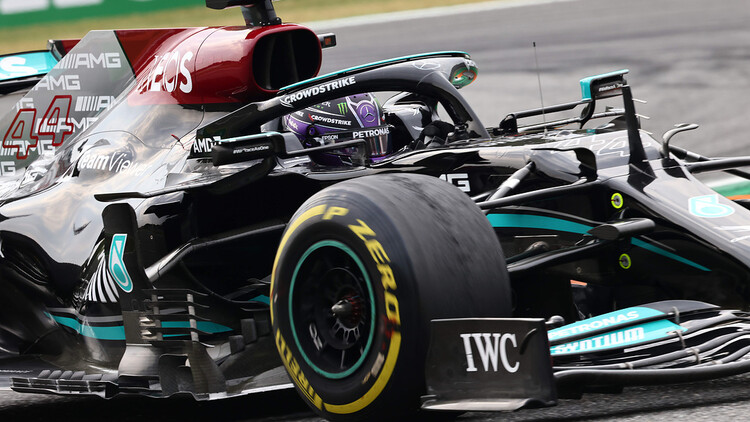 Mercedes' Lewis Hamilton believes Max Verstappen took a stubborn approach to their battles at Monza on Sunday, saying the Dutch driver simply didn't want to yield, resulting in the clash that took both out of the race.

Verstappen and Hamilton were going wheel-to-wheel through the first chicane on Lap 26 when the pair clashed, with the Red Bull crashing awkwardly over the top of the Mercedes and the two cars ending up stacked on top of each other in the gravel.

Both drivers were knocked out of the race on the spot, with the stewards now investigating the incident.

With Hamilton squeezing Verstappen at the apex of Turn 2, the reigning World Champion believes that he left enough room for his title rival.

"I was racing as hard as I could. I finally got past Lando and I was in the lead," Hamilton told Sky Sports.

"The pit-stop was obviously slow, I lost a couple of seconds, [so] Daniel came past and Max was coming.

"I made sure I left a car's width on the outside for him. I was ahead going into Turn 2 and then, all of a sudden, he was on top of me."

Referring back to the Dutch Grand Prix last weekend, Hamilton said he yielded ground when needed.

"It's exactly the same scenario that happened at Turn 1 at Zandvoort, where I went around the outside," he said.

"I was in the exact same position, but I gave way and that's racing."

The squeeze between Hamilton and Verstappen was actually the second of the race, with the pair racing on the first lap into the second chicane, with Verstappen emerging the victor after forcing Hamilton to back off at the apex.

"He just didn't want to give way today and he knew that when we were going into [Turn 2]," Hamilton said.

"That was going to happen. He knew that going over the kerbs, but he wasn't going to let me turn in.

"We'll speak to the stewards, but I don't know what else to say."

Having ended up in the position of racing Verstappen as a result of a slow pit-stop, Hamilton said the time loss had left them vulnerable in the first place.

"We lost around two seconds in the stop, which is frustrating," he said.

"When it counts, we need to deliver and obviously we didn't."