Wolff: I expect a lot from Vettel this year

Sebastian Vettel endured a difficult 2020 campaign at Ferrari, but Toto Wolff has high hopes for the German and his partnership with Aston Martin. 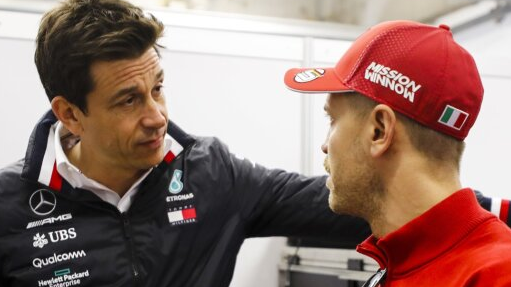 Toto Wolff has high expectations for Sebastian Vettel in 2021 and thinks that the German will prove to be a strong asset to Aston Martin.

It was announced before the 2020 season had begun that Vettel had been dropped by Ferrari in favour of Carlos Sainz for the following year. The four-times world champion went on to endure a difficult final season with the Italian team, but Wolff believes that his move to Aston Martin will prove to be a turning point in his fortunes.

"The chapter of Aston Martin as a factory team is just starting and Sebastian Vettel is one of the strong pillars in this project," Wolff told RTL. "Sebastian needed one thing above all and that was a change of scenery.

"When you get more and more into a negative spiral, you have to bring a change. That's what he did. He is now in a completely different environment."

Vettel spent six years at Ferrari and finished runner-up in the drivers' championship in 2017 and 2018. But his latter years with the squad proved to be more challenging, and he ended the 2021 season in only 13th place with 33 points to his name.

Despite this, Wolff doesn’t believe that Vettel himself is to blame and instead thinks there may have been wider issues.

"I don't think he didn't deliver," the Mercedes boss said. "It was the general conditions that got worse and worse or the teamwork that was disrupted. I expect a lot from Sebastian this year."

Fans were given a first glimpse of Vettel at Aston Martin this week, with the team releasing footage of the 33-year-old visiting the factory and undergoing a seat fit.

Lance Stroll joins Vettel in the former Racing Point team's line-up as they prepare for their debut season under the Aston Martin name.