Toto Wolff wants the 2021 F1 world title to be settled by a clean and fair fight, amid concerns of another clash between Max Verstappen and Lewis Hamilton following a dramatic Saudi Arabian GP. 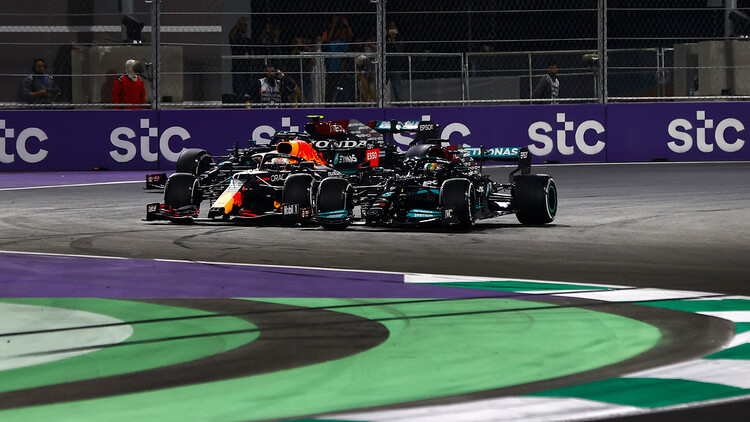 Mercedes boss Toto Wolff is worried about a "messy situation" arising at the season finale in Abu Dhabi if Formula 1 does not learn from the Saudi Arabian Grand Prix.

Lewis Hamilton and Max Verstappen are now level on points in the title race after a controversial encounter at the all-new Jeddah Corniche Circuit, in which the pair went wheel-to-wheel on several occasions and dramatically collided.

Verstappen was given two time penalties for his actions during the race, one for failing to cede position after leaving the track and gaining an advantage and the other for his "erratic" braking before Hamilton struck the rear of the Red Bull.

Amid concerns that the title could be decided by a contentious incident, Wolff expressed his hopes for a clean and fair fight at the Abu Dhabi GP.

Speaking to media, including RacingNews365.com, Wolff said: "I would hope that today's race has enough repercussions that everybody's going to learn from it and adapt for the final race in Abu Dhabi.

"I think that similar driving, if it were to be deemed by the stewards as over the line, would then probably also be penalised in Abu Dhabi, and that could well end in a messy situation for everybody.

"I don't think that the championship has deserved a result which was influenced by a collision, so I very much - in that case - trust into the self-regulating system."

Two races ago at Interlagos, the pair went wheel-to-wheel again, with Verstappen escaping a penalty for his stern defence - sparking a debate around the rules regarding overtaking.

"I said that [in] Brazil we're setting a precedent if it's not being investigated that could end up really ugly for the championship," added Wolff.

"We've seen incidents today that were pretty much Brazil at slower speeds and we don't want to have that in Abu Dhabi.

"The quicker car with the quicker driver should win the championship and not by taking each other off."

Wolff says it is important for all parties to keep their emotions in check as F1 moves on to the Yas Marina Circuit for the winner takes all showdown.

"I think we need to keep a lid on it. The emotions are running very, very high," he commented.

"There is a lot of respect between the teams, also for the achievements. That's why, as long as we have a clean race fighting for the Drivers' World Championship in Abu Dhabi, it [would be] a great season."