Why football's TV direction should look closely at F1

Distressing live footage of Christian Eriksen's collapse due to a medical emergency were broadcast everywhere on Saturday, with the incident treated very differently to how Formula 1 responds to on-track accidents 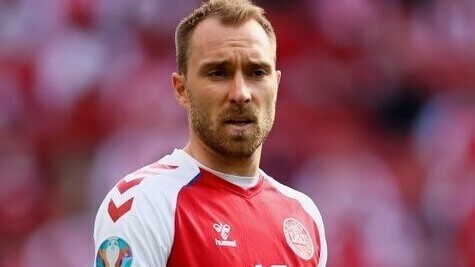 Saturday's Euro 2020 game between Denmark and Finland, sadly, became one of those 'bigger than sport' occasions when Christian Eriksen suffered a medical emergency on the pitch just before half time.

The Danish player was jogging away normally before suddenly collapsing on the pitch, a frighteningly abrupt fall with the player failing to respond to a ball that was coming towards him at the time. Thankfully, this meant that his collapse was spotted instantly and medical help was at Eriksen's side within seconds.

The conduct of the players on pitch from there was exemplary, with Eriksen's teammates forming a protective barrier around the huddle to try shielding him from view. Denmark captain Simon Kjaer earned rightful praise for his quick-thinking authority as he administered CPR to his fallen teammate, attempted to comfort Eriksen's partner, and ensured the situation was handled as well as could be.

Eriksen is now recovering in hospital, where he is conscious and speaking.

But, while the players did their best to grant Eriksen the dignity he deserved as he fought for his life on the pitch, the TV direction decided upon the opposite.

Within just a few seconds of Eriksen's collapse, viewers of the world feed were treated to a close shot of the man's eyes wide open and clearly in bad shape as he lay on the ground. Giving them the benefit of the doubt of where the nature of what was unfolding was still unknown ended at that exact moment.

But, did the cameras cut away? Or did they continue to linger and strain to try getting further close-ups of a dying man? This article wouldn't be here if they'd made the correct choice.

Even at the points where the cameras didn't remain locked onto the unfolding drama on the ground, the alternating shots showed tearful personnel and players, despairing fans, Eriksen's crying wife, and seemed to revel in the drama of the situation without any consideration of the impact such pictures might have on the people watching at home, or on Eriksen's family and friends. It was 15 minutes of footage that was callous, cruel and unnecessary to show.

Considering that there was a very real chance that Eriksen could have died right then and there, it was gruesome, voyeuristic TV direction. Especially when you consider that football matches will instantly cut away for the likes of a streaker or a political pitch invader.

After all, viewers must be spared the trauma of witnessing a flabby human body joyfully running across the pitch, but not live footage of a man dying on the ground.

UK viewers, watching the BBC, got an apology from the state broadcaster, who said, "We apologise to anyone who was upset by the images broadcast.

"In-stadium coverage is controlled by UEFA as the host broadcaster, and as soon as the match was suspended, we took our coverage off air as quickly as possible."

For the likes of the BBC and other broadcasters, they still have the option of cutting away from live footage from the host at any point. This is for the purposes of analysis, studio returns, general cut-ins etc. But, in the BBC's case, they chose to stay with the distressing live footage.

But why was the host broadcaster showing the footage in the first place? UEFA's TV direction specifically chose to linger and find other 'interesting' shots to supply to the feed, including probing shots of Eriksen's face through the feet of his protective teammates. 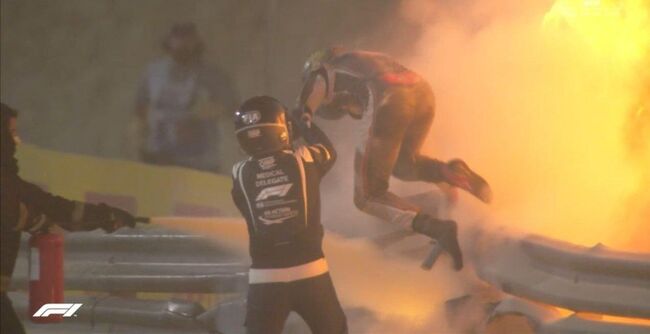 Contrast that with Formula 1's world feed, supplied by FOM to host broadcasters like Sky Sports F1. Romain Grosjean's crash in Bahrain at the end of the 2020 season is a prime example of how the sport chooses to handle footage of incidents that could result in injury or death. Aside from the crash being captured in the background of the initial wide shot of the cars approaching Turn 4, the cameras instantly shot away to show everything and anything but the unfolding drama in the flames.

The cameras didn't return to the scene of the inferno until Grosjean was sitting in the back of the Medical Car, some three minutes after the crash. It was only after the French driver's condition was known that replays, and that now famous, dramatic and terrifying footage, was released to the world.

Obviously, the nature of motorsport means that crashes can happen on the live feed before a TV director could realistically be expected to cut away. Think back to Spa 2019, when Anthoine Hubert's horrific crash was shown live. His car had barely come to a stop when the feed cut away, and no close shots or replays were shown again from that point. And it's that change in mindset that other sports need to employ.

Formula 1 has obviously had to learn from one of the most high-profile live televised deaths in sport, with Ayrton Senna's crash and extrication at Imola 1994 coming just 24 hours after a similarly live death for Roland Ratzenberger. The gratuitous shots of that weekend (through host broadcaster RAI) are emblazoned into the mind of anyone who watched, and FOM responded over the years to become more and more cautious, as well as assuming control of almost every single race's TV direction directly.

Granted, they weren't perfect, lingering over Michael Schumacher's leg-breaking crash at Silverstone 1999 before his status was known. Similarly, Italian marshal Paolo Ghislimberti's medical intervention at Monza in 2000 was also shown but, just months later, FOM didn't show any of the same medical intervention for Australian marshal Graham Beveridge after being struck by car debris. Tragically, both marshals died from their injuries.

In 2007, Robert Kubica's huge crash at Montreal was shown live, with the footage sticking with the Polish driver's car as it came to a stop with his feet exposed in the chassis.

Nowadays, FOM err on the side of caution and cut away as soon as is possible, showing replays when the condition of the driver is known. Which is the correct way to be.

Of course, other motorsports could still learn from FOM. Just last week, Moto3's Jason Dupasquier passed away after an accident at Mugello. Following the initial accident, FIM's TV footage poked and prodded away at the scene as the medical crews tried to save his life on the track. This, understandably, led to some social media backlash and, presumably, some lessons for the MotoGP world.

All professional sport, through their governing bodies and authorities, should understand that televising a medical emergency or an accident is not what sports fans want to see. At least, not those with a conscience or any sort of empathy.

If something goes wrong in the field of play, cut away as soon as possible. This isn't some sort of modern day, dystopian Running Man, where audiences are baying for tragedy and pain. Cutting away isn't going to harm your 'product' in any form.

It shows respect for their athletes, the people who love them, and for the viewers at home.