Why 2021 is a defining year for Hamilton

Mercedes driver Lewis Hamilton is about to embark on what is one of the most crucial years of his Formula 1 career. RacingNews365.com explains why it's such an important campaign. 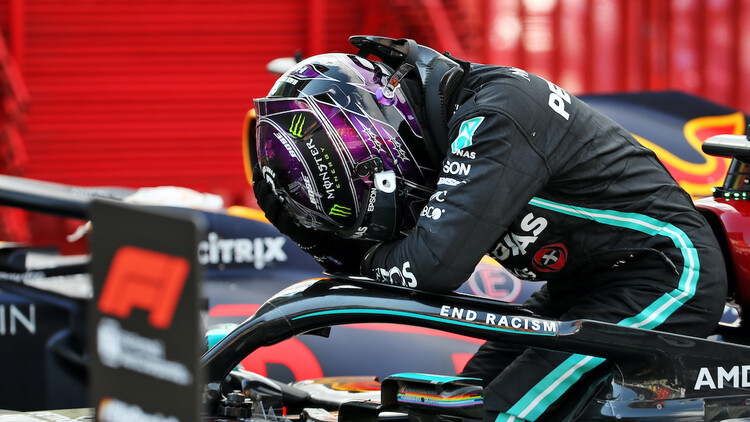 Back in 2013, Sebastian Vettel ended the year with nine straight wins and a cryptic radio message to his Red Bull team eerily foreshadowing the end of their dominance in Formula 1.

Little did we know at the time that Vettel's words would prove to be true would true with the German ceding his position as the sport's golden boy to Lewis Hamilton who himself has embarked on a winning run that has seen him re-write the record books.

The British driver has won the driver's championship in all but one year since 2014 and Hamilton now stands on the cusp of winning a record-breaking eighth world title.

While the Mercedes driver has stated that an eighth championship isn't a priority heading into the new season, the chance to make history must weigh on his mind in some capacity, after all, he is only human.

The other factor at play is that both Hamilton and Mercedes have only agreed on a one-year contract extension. This has inevitably led to the speculation that Hamilton could possibly retire at the end of the season especially if he does win that record-breaking championship.

However, in the unlikely event that someone else manages to pip him in the driver's standings, would he still retire or leave Mercedes?

The answer could lie in how well prepared the Mercedes team are for the upcoming technical overhaul. The German team have enjoyed a stranglehold on the sport for the past seven seasons with a Mercedes driver being crowned champion in every season since the turbo-hybrid era was introduced.

The team are the favourites to extend their success by a further year, though their status as F1's top dog could be threatened come 2022. How they cope with the upcoming rule changes could be key to Hamilton's future as the Englishman will not want to waste the last years of his career fighting in F1's midfield.

The Briton is also F1's highest-paid driver, a sum that is reportedly more than double of the sport's second-highest earner, Fernando Alonso.

With calls growing to place a cap on driver salaries and the financial implications of the ongoing coronavirus pandemic sure to still reverberate through the paddock, the Englishman might find that his interests lie elsewhere.

While this is unlikely to be the determining factor in whether Hamilton stays or not, an eighth world championship or an uncompetitive car coupled with a restriction on his income might force the Stevenage born driver to focus on some of his other passions such as music or his fashion line.

The final reason why Hamilton could choose to depart from the sport is in the form of two young drivers taking Formula 1 by storm.

The first enemy is from within Hamilton's own camp, in the form of Mercedes junior George Russell. Russell put in a brilliant display during last year's Sakhir Grand Prix when he substituted for the COVID stricken Hamilton, and the Englishman would either represent a formidable teammate or an able replacement depending on his compatriot's future.

The second threat to Hamilton's future is the Dutchman, Max Verstappen, who is possibly F1's brightest prospect. Team principal Toto Wolff has already expressed an interest in having the current Red Bull driver in a Mercedes at some point in the future and Verstappen would be more than ready to lead Mercedes if Hamilton were to depart the team.

Back in 2013, nobody would have believed that after seven seasons of racing neither Vettel nor Red Bull would not add another title to the four they had already accumulated together. Perhaps both Hamilton and Mercedes might be wise to heed the radio message Vettel relayed to his team back then.