Nico Rosberg and Lewis Hamilton were no strangers to having the occasional collision during their time as Formula 1 teammates. Now their Extreme E entries have met the same fate, but it was Rosberg's team that came out on top. 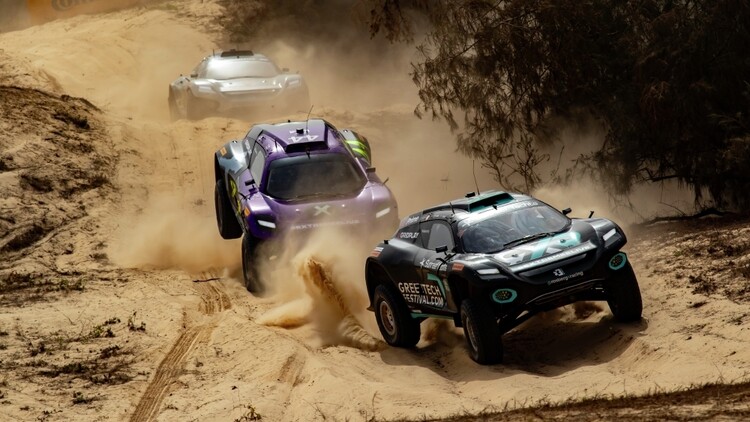 Nico Rosberg's Extreme E team has beaten Lewis Hamilton's entry to win the weekend's race in Senegal after their cars collided in the early stages.

Hamilton's X44 car - driven by Cristina Gutierrez - sustained damage following contact with Molly Taylor in the Rosberg X Racing vehicle. Gutierrez was forced to stop the car due to a suspected steering failure.

If it is any comfort to Hamilton, he wasn't the only F1 driver to see his team fail to finish. Former World Champion Jenson Button's JBXE squad also suffered a retirement from the four-mile beach sprint when driver Mikaela Ahlin-Kottulinsky hit a sand bank, causing the right wheel on the rear to rip off.

This left just Taylor and Stephane Sarrazin in the Veloce Racing to compete in the event. At the end of the first lap, the race was red-flagged so that the two retired cars could be cleared.

Both remaining teams completed a driver swap, which saw Johan Kristofferson take over in the RXR whilst Jamie Chadwick jumped into the Veloce Racing.

Kristofferson was able to gradually build a lead following the race restart and took the win by 14 seconds, meaning that Rosberg's squad increased their lead at the top of the championship after their previous victory at the season-opener in Saudi Arabia.

Rosberg joined his drivers to celebrate their win in the Ocean X Prix and spoke of his pride at their second success.

"I'm so proud that we also won the second Extreme E Race! Fantastic performance by the entire team topped by phenomenal racing on the track by @molly_rally & @JohanKMS88!" the 2016 F1 World Champion posted on Twitter.

"What an intense race weekend...we take home many learnings from"

The next race in the series - which aims to increase awareness of climate change by racing electric vehicles in remote locations under threat - will take place in Greenland on 28-29 August.