Although Lewis Hamilton started the Italian Grand Prix on Hard tyres, Mercedes didn't wait long to bring the Briton in once it became clear he wouldn't get the better of his rivals following their pit-stops. 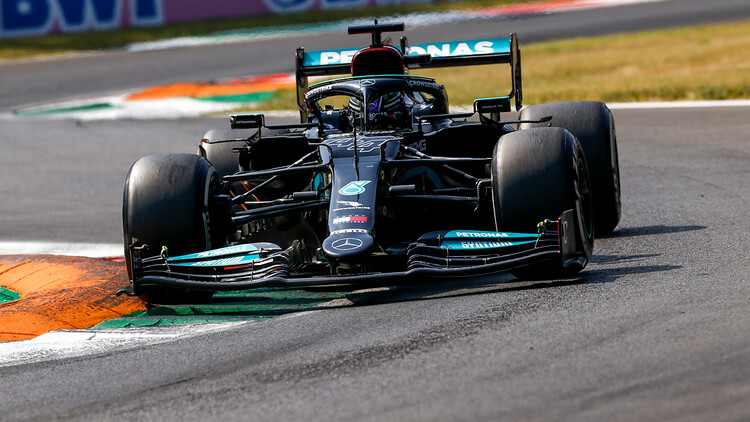 Lewis Hamilton started the Italian Grand Prix on Hard tyres in an attempt to run longer than his rivals, but Mercedes Chief Strategist James Vowles explained that strategy was quickly abandoned once it became clear he wouldn't be fast enough to keep up with the likes of Max Verstappen and Daniel Ricciardo following their pit-stops.

Hamilton started Sunday's race at Monza in fourth position after a disappointing performance in Sprint Qualifying, falling down the order with a slow getaway off the line.

As a result, Mercedes opted to start both cars on the Hards given that Hamilton and teammate Valtteri Bottas, who started from the back of the grid, were out of position in terms of pure pace.

Mercedes hoped that by offsetting both drivers compared to their competition, they would make up time, but Vowles stated that it became "glaringly obvious" after Verstappen and Ricciardo pitted that Hamilton would lose ground if the team decided to keep him out as long as they initially planned.

"The Medium tyre was degrading, you could see Verstappen and both McLarens were really starting to drop off in terms of lap times," Vowles explained in Mercedes' debrief of the Italian GP on their YouTube channel.

"Lewis' Hard tyre would have provided him a little bit more resilience to that but even so, he'd been pushing very, very hard for 20 odd laps and that tyre wouldn't be in the freshest state possible.

"Cars started to stop as you would imagine. Ricciardo first to cover the win, Verstappen then came in and Lewis just on that lap overtook [Lando] Norris, because his Medium tyres also dropped off. We hadn't seen a single lap from Lewis yet in free air, so it is important to understand how quick we could really go, so we left Lewis out for that one lap.

"In that time, the time that Verstappen had stopped and Ricciardo had stopped, it became glaringly obvious that they were incredibly quick, that there was degradation on the Hard tyre and we would not be quick enough to keep pulling them out of our pit-stop window. They in fact would come straight back in, so there was literally a window of opportunity that was then and there and that was it.

"It was a window where Verstappen and Norris were caught behind [Lance] Stroll, who had yet to stop, for Lewis to come in. Had we waited, there is no doubt that they would easily closed back up into Lewis' pit window and now you are committed to a very long stint on the tyre that is clearly suffering at that stage."

A slow pit-stop from Red Bull opened the door for Hamilton to come out alongside Verstappen and Norris, which was a welcome sight for Mercedes given the team predicted that they would be able to clear both drivers with their initial strategy.

"Now, we had a prediction that we were going to come out nicely ahead of them," Vowles added. "Unfortunately, suffering a small issue in the pit-stop, as did Verstappen, the opportunity was created simply because Verstappen had a poor pit-stop as well, and that meant that instead of clearing both Norris and Verstappen, as you saw, we came alongside.

"Either way you take opportunities like that, we knew the Medium tyre could go to the end from that point and that is our direct rival in the championship."