Max Verstappen's crash at the British GP will cost Red Bull a significant figure according to team principal Christian Horner, especially with the budget cap now in place. 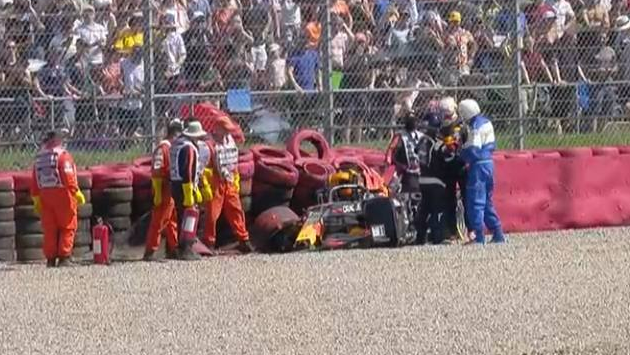 Red Bull team principal Christian Horner has revealed how much it cost the team to repair Max Verstappen's RB16B following his accident at the British GP, with the figure standing at a whopping $1.8 million.

The Dutchman crashed heavily into the barrier at Copse corner after being tagged from behind by championship rival Lewis Hamilton. Red Bull advisor Helmut Marko initially estimated the repairs would cost the team €750,000, however the final figure is much larger.

"It is no secret that we felt at the time, and still feel, that Hamilton was given a light penalty for this type of incident," Horner stated on Red Bull's official website.

"Given the severity of the incident and the lenient penalty, we are reviewing all data and have the right to appeal the decision. We are therefore still looking at the evidence and considering all of our sporting options.

"The other significant factor is the cost-cap element of this. That crash has cost us approximately $1.8 million and an accident like that has massive ramifications in a budget cap era."

Horner's disappointment didn't end there, as he also questioned Mercedes' celebrations following Hamilton's win. The Briton overtook Charles Leclerc with three laps remaining and celebrated in front of his home fans. Horner believes Mercedes should have shown more restraint given it was known Verstappen was taken to hospital for further checks.

"I am also still disappointed about the level of celebrations enjoyed in the wake of the accident," Horner added.

"The Mercedes team were aware of the gravity of the crash with Max widely reported as having been hospitalised and requiring further checks.

"It is unimaginable not to inform your driver of the situation, moreover to protect your driver in case they do not show the necessary restraint in celebrating, particularly when it was as a result of an incident he was penalised for."