Horner furious with Mercedes: Full blame is on Lewis

Red Bull's Christian Horner has firmly pointed the finger at Lewis Hamilton being to blame for the collision that took Max Verstappen out of the British Grand Prix. 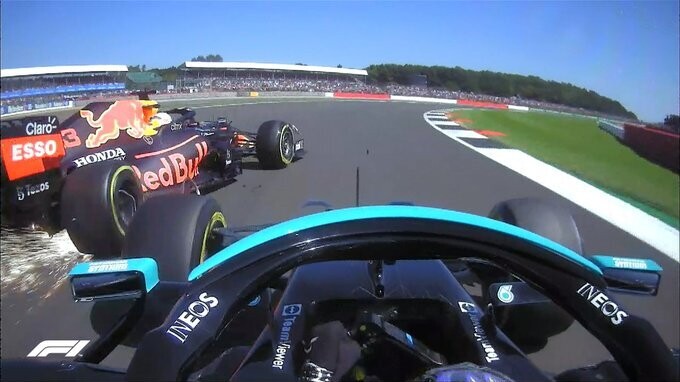 Red Bull's Christian Horner has no doubt that Lewis Hamilton is to blame for the clash between himself and Max Verstappen, that has resulted in the Dutch driver being eliminated from the race.

Verstappen was battling with Hamilton through Copse, with the Mercedes driver tagging the right rear of the Red Bull. Radio messages between Red Bull and Mercedes with FIA Race Director Michael Masi have revealed the full extent of Red Bull's anger.

"That corner, he was never anywhere near alongside. Every driver that's driven on this circuit knows you do not stick a wheel up the inside of Copse. That's an enormous accident. And it was 100 percent Max's corner so, as far as I'm concerned, full blame lays on Lewis Hamilton who should never have been in that position.

So, you could have had a massive accident. Thank God he's walked away unscathed. So, I hope you're gonna deal with it appropriately."

Masi confirmed the incident is under investigation with the stewards, while Mercedes' Toto Wolff radioed Masi to enquire as to whether the Race Director had received emails of diagrams related to the accident and car positioning. Wolff is now off to visit Race Control.

Mercedes' Ron Meadows was also heard on the radio to Masi, saying: "Have a chance to look at that footage, Lewis is significantly alongside on the inside of Turn 9."