Tempers can sometimes flare when drivers are involved in accidents at high speeds. That was certainly the case with George Russell and Valtteri Bottas at Imola, with Damon Hill comparing the incident to a famous one involving Michael Schumacher and David Coulthard. 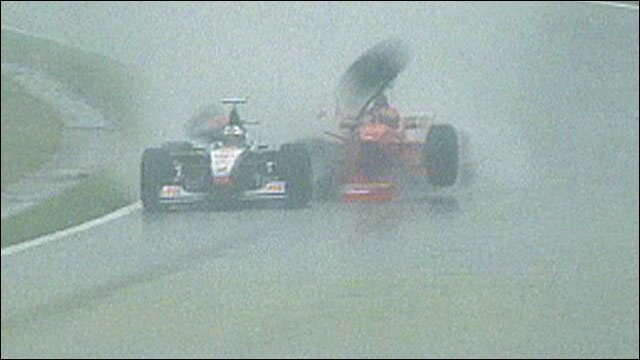 Damon Hill has stated the anger shown by George Russell in the immediate aftermath of his crash with Valtteri Bottas reminded him of Michel Schumacher after his spectacular crash with David Coulthard in 1998 that saw the German look for the Scotsman in the garage.

The fallout from Sunday's massive crash continues, with the Williams driver apologising for his behaviour after sleeping on the matter. Initially he asked whether the Finn was trying to kill the both of them.

While speaking on the F1 Nation podcast, Hill wondered whether the frightening nature of the incident turned up the anger in the Brit much like Schumacher back at Spa in 1998. The Ferrari driver slammed into the back of Coulthard in treacherous conditions while in the lead, resulting in a confrontation between the two in the McLaren garage.

"It's a little bit like that Spa race in 1998 where Schumacher goes in the back of Coulthard because Coulthard was on the racing line and Michael misjudged it," said Hill. "I've never seen Michael so cross. He went up to the garage to tried to lay one on DC.

"I think when you have a frightening incident like that, it does sometimes turn into a bit of anger and you try to find someone to blame. Most of the drivers I spoke to about it afterwards who saw it concluded that George had some responsibility for it because he's not only going for a pass, it was on a slightly damp track.

"It was always going to be tight so you need everything to work perfectly, but the problem was he had his DRS open and if you have your DRS open, you haven't got enough load on the rear tyres and they just lit up on that damp patch and they collected each other."

When asked whether the DRS should have been open given the track was still damp at the time, Hill thinks it's something that should be considered in the future.

"I hadn't thought of that because it is within their power to not allow the DRS and I think maybe you have to consider that for next time," Hill concluded.