Hamilton enjoyed seeing Wolff's 'fighting spirit': It made me laugh! 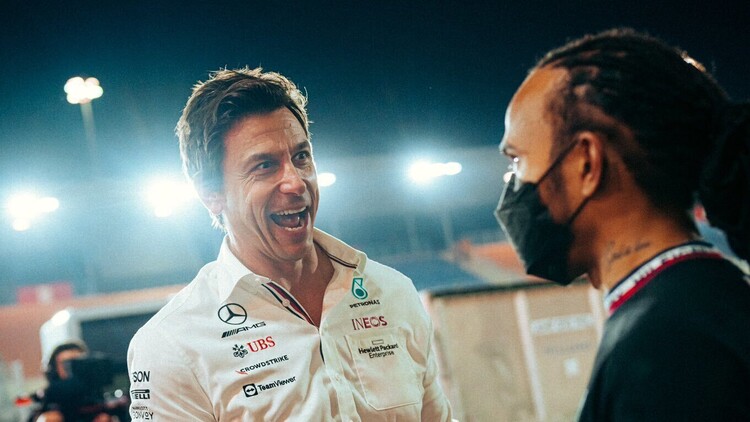 An already tense rivalry between the two teams reached boiling point at the Brazilian Grand Prix when Lewis Hamilton was excluded from qualifying, amid a backdrop of questions from Red Bull over the legality of the Mercedes.

After an impressive recovery, Hamilton went wheel-to-wheel with Max Verstappen for the victory and, when he eventually made a move stick, Wolff gave a passionate response to the cameras in the Mercedes garage.

When asked about Wolff's antics at recent races, and whether the title fight is taking its toll, Hamilton brushed off such suggestions and praised his boss for showing his emotions.

"I haven't really noticed anything unusual," Hamilton explained to accredited members of the media, including RacingNews365.com.

"I mean, we're competitors, and I love seeing Toto's fighting spirit, it makes me so happy. There's a shot I saw [from the Brazilian GP] and it just made me laugh inside, it was so good!"

Hamilton went on to describe his respect for Wolff's approach and the close bond they have developed during their time together at Mercedes.

"If Toto cared less and was just chill, I don't know… That fire and passion is a part of our infrastructure and our ecosystem, and it trickles down from him," added Hamilton.

"He is the leader of the team and you want that in your boss, someone that's out there go-getting, pushing and chasing every millisecond, and [is] with you along the way - I love that he stands for what he thinks is right.

"We've grown hugely close over these years, as we will continue to do."